Error type: "Forbidden". Error message: "The request cannot be completed because you have exceeded your quota." Domain: "youtube.quota". Reason: "quotaExceeded".

Did you added your own Google API key? Look at the help.

Check in YouTube if the id PLJoaVZ5hNlnV9mCRB3ggc8VygDfu-SoO- belongs to a playlist. Check the FAQ of the plugin or send error messages to support. 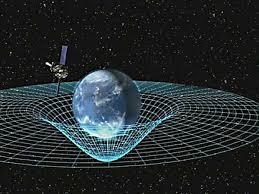 In Part 1, we discussed emerging technologies and discoveries that are currently predicted in scientific circles to occur prior to the technological singularity of 2045. In Part 2, we focused on CERN and the possible coming graviton communication system built to send messages to higher dimensions. We also looked at the possibility of this being foretold in the book of Revelation. In this third installment, we are going to look at the possible discovery of quantum consciousness, how it could herald in the singularity itself, and what that means for us as Christians.

Physicists admit that, while they know much about the quantum world within our day to day lives, consciousness has eluded them. Given the discovery of the Higgs boson in 2012, thereby completing the Standard Model, science has unraveled the mysteries surrounding the subatomic existence that makes up physicality in our minuscule section of the universe.[1] That is, however, except for the mystery of consciousness.

Everything in physical existence is made up of elementary particles known as quanta (plural: quantum). These quantum particles are created by fluctuations in quantum fields, which is the basis of Quantum Field Theory (QFT). A field is basically the idea of every point in space with a value. Those values make up the field. A way to think of this is to imagine the temperature in the room. Near the ceiling, where the temperature is higher, the values will be higher, while near the floor they will be lower. The temperature in the room is not a true quantum field since it is only describing an attribute of the air, but it is a good thought exercise to help get our heads around what fields are. 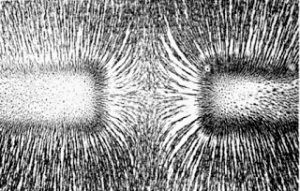 Now imagine a magnetic field. If we think back to middle school science class, we might remember doing an experiment with magnets and iron filings. When we put the magnets together, the iron filings react and actually show the magnet field around them (Figure 1). If we were to place a value at each point, we would find higher values near the magnet and lower values farther away.

The same goes with gravity. The gravitational field closer to the Earth (or any planetary body) will have higher values while further out in space, the values will be lower. With QFT comes a few rules dictated by quantum physics. First, every field has a fundamental particle that arises from it. The same thing said in a different way: every quantum particle has an associated field that it comes from. This is true for every field and every indivisible particle. The graviton is generated by the gravitational field. The photon is from the electromagnetic field. The up quark is from the up quark field. The Higgs boson is from the Higgs field; so on and so forth.

Another rule is that a fluctuation in a quantum field is what constitutes an existing particle. When the values of a field increases substantially enough in a localized area, it is known as a wave. That wave is the particle. This is how, in quantum physics, particles can appear and disappear seemingly from nowhere. Fundamentally, everything is existence is made of waves. Quantum mechanics says when we observe the wave, it resolves into a particle. This isn’t some magical thing that is happening, it is just a matter of perception. Reality is waves, but what we see due to limited perception is particles.

This is how the discovery of new particles at CERN with the LHC makes sense. When we think about it on the surface (without QFT), how is it possible to create a Higgs boson by smashing two protons together when the Higgs boson is not a part of the original protons? If reality was only comprised of particles the way we see them, it would not be possible. However, if we take QFT into consideration, it becomes much clearer. At every point in space, there are dozens of fields (57 to be exact, however it might be 58 now due to the discovery of the Higgs field).[2] When protons are smashed together at incredibly high speeds (99% the speed of light), it releases energy. That energy has to go somewhere, so it vibrates some of the other fields. If the other fields vibrate enough, new particles can come into existence. To use an analogy by physicist Sean Carroll, it is like playing a piano in one room, and a piano in another room will hum along by picking up on the sound waves from the first piano.[3]

Physicists such as Sean Carroll will admit that, when it comes to the world around us and on a quantum level, we pretty much know what comprises existence by way of the Standard Model. Of course, this does not apply for unexplained things out in the universe, such as dark matter, dark energy, black holes, and many more anomalous things. This only applies to the world we live in and what we deal with from day to day life. All except for consciousness, of course.

The Quantum Question of Consciousness

Consciousness, the state of being self-aware, is something physicists have not come into agreement on concerning an explanatory theory. That is not to say there are not theories out there; there are plenty. There have been theories presented that state consciousness is part of the electromagnetic field, such as CEMI theory.[4] Physicists have largely dismissed the idea of the EM field producing consciousness, however there is another theory that may provide a better answer.

Quantum Brain Dynamics (QBD) is a theory that states there is a new quantum field that is responsible for consciousness.[5] This hypothetical field is known as the “cortical field”. The quanta (elementary particles) of this field are known as “corticons”. According to Wikipedia:

If this turns out to be true, it would mean our personal consciousness exists by means of interaction with a quantum field, or due to interaction by quantum particles. Due to the rules of QFT, if the right amount of energy is applied to the cortical field, it could produce corticons. Conceivably, this could be done at particle accelerators such as the LHC at CERN.

There are scientists today who are trying to tackle the mystery of consciousness.[7] Given that this could be tested with our current technology, it causes one to wonder what the future might look like if any of these quantum consciousness theories turn out to be true. If corticons are discovered, that would be proof of the cortical field, just as the discovery of the Higgs boson was proof of the Higgs field.

Where This May Lead

There are enormous technological implications to a discovery such as corticons. The solution to how to make artificial intelligence a reality would be realized. This also would provide a relatively inexpensive way to do it with limitless resources. All one would need to know is how to manipulate the cortical field and/or corticons themselves to keep them active inside a computer or other technological device. How much easier would it be to create real consciousness out of thin air by manipulating nature rather than spending an unimaginable amount of money to research and develop computer code and software that can handle an artificial intelligence? If corticons are found, it would be far easier and more cost effective to apply corticons into a machine, or to build a machine that can manipulate the cortical field, thereby causing that machine to be conscious, aware, and even alive.

There is also a great potential within the transhumanist crowd if corticons are discovered. The discovery of corticons would be the answer of how to technologically transfer a person’s consciousness into a machine, thereby enabling that person to live virtually forever. This might very well be the discovery that ushers in the proposed singularity of 2045, if not even sooner. If science discovers a way to explain, manipulate, and even create consciousness on a quantum level, surely our world and civilization will undergo a rapid and intense change that few will be ready to deal with or even understand. This is why we must start thinking about this now so we can be prepared.

Thank you for reading, take care, and God bless!

[1] The Standard Mode is complete at least to the extent of everyday experience; this does not take into consideration things like dark matter, dark energy, and other possible supersymmetric particles.

[3] Sean Carrol, The Particle at the End of the Universe

Path of the Immortals Bundle


Warning: Use of undefined constant user_level - assumed 'user_level' (this will throw an Error in a future version of PHP) in /home/customer/www/skywatchtv.com/public_html/skywatchmagazine/wp-content/plugins/ultimate-google-analytics/ultimate_ga.php on line 524