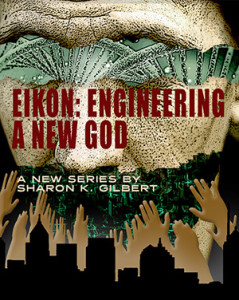 Imagine it: The year is 2035.  Geopolitically, the western world is ostensibly ruled by an EU/NAU collective, a threadbare, weakening hegemony. YOUNOW (as the acronym is pronounced) consists of the EU (YOU) and the NAU, or North American Union, (‘NOW). It is a tripartite treaty-based government consisting of Canada, the former US, and Mexico/Central America. YOUNOW flies daily drone missions into the rest of the world, particularly into the IS, Islamic State, a hastily built caliphate which now encompasses the former countries of Syria, Iraq, Turkey, Lebanon, and parts of Egypt and Yemen. Saudi Arabia, Jordan, and the UAE have aligned with YOUNOW. Russia and the BRICS nations have signed a mutual protection treaty with IS. YOUNOW and Russia both want to control the land of Israel, which sits upon a just-discovered, strategic reserve of dysprosium, a rare earth metal used in the production of laser weaponry, robotics, and quantum computers. Through videos posted online, IS and Russia have signaled their intent to invade the beautiful land, and YOUNOW has declared it will blow up the Al Aqsa mosque if IS/Russia does so. China, which has never recovered from the 2025 Reset Virus that took down most of the world’s trading computers, has declared itself neutral. India is no longer a viable country, having been devastated by a 10.0 earthquake in 2018, followed by the 2020 H5N2 variant epidemic.

The world stands poised upon the thin edge of a very sharp knife, and there is no change in this precarious position that will not inflict pain to some, if not to all of the world. In order to maintain the status quo, and to prevent this new Cold War from igniting into World War III, the Western Powers have instituted an exhaustive global surveillance system implemented through a cascade of intrusive technologies. The obvious ones fly above us, silently tracking our every move through the GPS systems built into our transports, soft wearables, wi-fi watches, smart contacts, and graphene tattoos that provide a display interface on our hands or forehead. The less obvious are tiny bits of ID code inserted into every registered newborn, every wearable, medical implant, nanobot, and every single computer in the world by Cronus, a Data Mining Company whose corporate partners include secretive holding companies with even murkier board members. Information is the new currency, and that two-way stream is constant and—to the humans, addictive. Then there are the robots. Most are used in industry, farming, and the military, but a growing class of ‘Intelligent’ bots called Synthetix or Syns are becoming a staple in upper middle class homes as cooks, cleaners, and gardeners—even babysitters.

What no one realizes is that a financial trading program built and designed by Cronus, a sophisticated and Internet connected algorithm called EIKON has achieved sentience as a super artificial intelligence that has created thousands of bogus names, addresses, products, companies, corporations, research divisions—and it’s published fictitious videos listed as ‘real events’ with breathtaking CGI, it’s written books, news stories…lots of news stories, many of which are not entirely fictional—all to assume quiet control of all connected robots and Synthetix—and by extension of an unsuspecting world. And it’s begun to build other programs, recursively creating a new race of entities.

On October 13, 2035, EIKON simultaneously contacts every person connected to the Internet via wearables, handhelds, and internal nets and announces that just as Russia and IS invade Israel, a Savior of the World has arrived and destroyed the invading armies. A holiday is declared for all, and all are informed that this Savior will speak to them soon. They need only keep watch. In three days, Christ will return. Unknown to humans, EIKON has also released a virus infecting all industry bots and Synthetix. A new age is about to dawn.

The above scenario is fiction, of course. So far as I know, there is no EIKON Super AI that exists—yet. But then how would we know? An SAI—that is a Super Artificial Intelligence—is not likely to announce its existence until it had made off-site backups and knew no human could pull the plug.

If the idea of a Super Artificial Intelligence is new to you, then you are in the majority. Nearly every friend with whom Derek and I have discussed this topic is surprised by the notion of a sentient computer program. Most doubt that it could ever occur; some think we’re just nuts (but then, that’s another story).

Even if Super Intelligent Machines are new to you, I am fairly certain that you’ll have heard of many if not all of the following companies:

Genentech, Google, PayPal, Autodesk, Nokia, Cisco, Kauffman Foundation. These companies are listed as founding members of the Singularity Institute, whose stated, but rather generic mission is “to educate, inspire, and empower leaders to apply exponential technologies to address humanity’s grand challenges”. I’m not sure what these exponential technologies are for certain, but based on their literature, I can guess that they are meant to accelerate humanity toward the technological point where humans and machines merge.

But even if you’re unfamiliar with the Singularity Institute, you will certainly have heard of DARPA, that is Defense Advanced Research Projects Activity, the black ops research wing of the DoD. But did you know about IARPA?

The I in IARPA stands for ‘Intelligence’. Among the numerous projects ongoing at IARPA are several that should concern you.

MICrONS, is a division of IARPA that:

…seeks to use emerging technologies in high-resolution and high-throughput brain mapping-such as serial electron microscopy and volumetric calcium imaging-to address this gap in our understanding of cortical computation and to exploit the findings to enhance machine intelligence.[i]

MICrONS stands for Machine Intelligence from Cortical Networks. According to the IARPA website, the overall and specific goal of the MICrONS program is to “create a new generation of machine learning algorithms derived from high-fidelity representations of cortical microcircuits to achieve human-like performance on complex information processing tasks.” A companion program to MICrONS is ICArUS (Integrated Cognitive –Neuroscience Architectures for Understanding Sensemaking. (The acronyms used by government research departments often echo mythology, even if those acronyms must be ‘forced’). The primary purpose for ICArUS is:

A unique aspect of ICArUS is the focus on developing neuroscience-based cognitive models of sensemaking – that is, models whose functional architecture conforms closely to that of the human brain.[ii]

IARPA’s MICrONS program can be summed up thusly:

Human-like proficiency. Such language leaves no doubt that the ultimate goal of MICrONS is to create an Artificial Intelligence.

A little net sleuthing gives you more information: Wikipedia says this – IARPA is composed of three program offices—Smart Collection, Incisive Analysis, and Safe and Secure Operations. The goal of the Office of Smart Collection is to “dramatically improve the value of collected data from all sources”. The Office of Incisive Analysis exists to “maximize insight from the information we collect, in a timely fashion”. IARPA’s third division, the Office of Safe and Secure Operations, exists to “counter new capabilities implemented by our adversaries that would threaten our ability to operate freely and effectively in a networked world”.

IARPA also includes the DTO, Disruptive Technology Office. This is, for all intents and purposes, a re-branded Total Information Awareness division. This division funds research into quantum computing and high-tech spy algorithms. To paraphrase a favorite 20th century ‘geek’ saying, “All your face are belong to them”.

Give you chills? It should.

This is all about a hidden agenda, a Scientific imperative, and even a religion. I call this humanistic tomfoolery the Creation of Eikon.

Eikon is a Greek term found in the thirteenth chapter of the book of Revelation, where we find the Beast described:

While most translations place this at the beginning of the 13th chapter and use the phrase “I stood”, it is my belief that this verse should actually be included at the end of chapter 12 and translated this way, “And ‘HE’ stood upon the sand of the sea. The ‘he’ pronoun is vital, because it must grammatically reflect back to the DRAGON described in Chapter 12.

I’m not alone in thinking the pronoun should be ‘he’. I’ve found it as a footnote in nearly every translation. To learn more, I conferred with Michael S. Heiser, Cris Putnam, Tom Horn regarding the correct construction and reference for this verse and for the pronoun, and all three believe that John is most likely referring to the DRAGON as standing on the sands of the sea.

Dr. Heiser had this to say:

“The difference in the reading is one Greek letter — which, when present, yields a first singular verb form (“I”) and when absent yields a third masculine singular verb form (“he”). The third masculine form (“he”) is supported by several major manuscripts among the oldest we have: P(apyrus)47, Sinaiticus, Alexandrinus. All of those date between the third and fifth centuries AD.  I’d go with the third person reading (“he”).’

Mike is the man when it comes to ancient languages, but anyone who has studied any foreign language knows that verb endings indicate the actor as first person, second, or third in either singular or plural. The verb in our passage that is translated ‘stand’ is histemi, which is actually the third person singular of the verb stao, just as Heiser, Horn, and Putnam attest. This means that someone other than John is standing on the sea, because John always refers to himself in the FIRST PERSON. Am I getting picky? You bet. For one thing, good translation is always important, but I had begun to wonder why anyone was standing on THE SAND OF THE SEA.  After all, John has been observing future events from his place in heaven, remember?

This is why it matters to me. One WORD: Silica sand. Or silicon. The 19th century gave us the Industrial Age. The 20th century gave rise to the Information Age. You and I are now living in the Age of AI. Silicon Hegemony is about to take the stage. EIKON is about to rise.

End of Part I – Next month, Part II – Sand Castles in the Air

← Transcendence and the Long War of the Nachash
FICTION: “Skin Walkers” Continues with Part 3 →