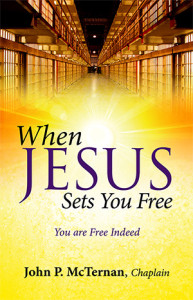 One of my most vivid memories as a federal agent involved the arrest of a young businessman for paying bribes. This man owned and operated a massage parlor/bordello. This was the first time that he had been arrested and he was frightened. Strangely enough, he had never considered that he could be arrested and go to jail for his crimes. But the government had overwhelming evidence to convict him, including recorded conversations of him paying bribes.

After the arrest I searched him and found a laminated card with Psalm 23 on one side, and on the other, the Lord’s Prayer. I held up the card and looked right at him. He said that his parents were Christians and had given it to him. They had pleaded with him to come to Jesus Christ and get out of his life of crime. I told him, “You should have listened to them, because now you are in the hands of the U.S. Attorney.” This young man was terrified. I saw it in his eyes, and heard it in his voice.

By the time that he had been processed, it was late in the day. I had to turn him over to the U.S. Marshals for an overnight stay in jail and arraignment before a judge the next day. As we walked to the Marshals’ Office, his fear had escalated to panic. I placed the laminated card in his shirt pocket and told him to read it, repent and turn to Christ. The marshals knew we were coming, and two of them were waiting for us. When he saw them, the young man actually pleaded with me not to leave him. I told him that he had to face this alone. I stood and watched as the marshals grasped his arms and took him through metal doors into a holding cell. The young man looked back and we locked eyes. His were wide with rising terror.

In my mind, I still can see those eyes. They showed the fear that man’s legal system can inflict on a person. But this terror is insignificant compared to what will happen when someone faces God from the wrong side of His divine legal system. In my new book, “When Jesus Sets You Free, You Are Free Indeed” I explain how an individual can choose to be on the correct side of God’s law and thus, never face the spiritual equivalent of the terror which that young man experienced for breaking man’s law. Because God provided Jesus Christ as your Advocate, you can have assurance of forgiveness for your sins before God’s court of justice.

The concepts in the book resulted from a merger of my 26 years of career experience as a federal agent, my intensive study of the Bible, and my ministry to prisoners. All three merged in my mind to give me a very clear understanding of how God deals with man through a precise legal system. If you understand man’s legal system, then it is very easy to understand God’s. The key is to see sin as the equivalent of crime in God’s system, and then all the rest falls into place.

I pray that God will use this book to give all who read it the assurance of eternal life with Him, through His ordained Advocate, Jesus Christ.

1 John 2:1 My little children, these things write I unto you, that ye sin not. And if any man sin, we have an advocate with the Father, Jesus Christ the righteous:

The Healing of the Broken Heart (Excerpt From Chapter Six)

Luke 4:18  The Spirit of the Lord is upon me, because he hath anointed me to preach the gospel to the poor; he hath sent me to heal the brokenhearted …

The Bible uses graphic words to describe what happens when a heart is broken. The picture is one of violent tearing and fracturing that shatters an object into pieces. If you ever have seen a picture of a severely fractured bone, this is what a broken heart looks like spiritually! A fractured bone needs an operation to put all of the pieces back together, and so it is with a fractured heart.

Because of the curse of sin, this world is designed to break the heart. Once the heart is broken, there is nothing on earth that can fix it. Psychology, with all of its drugs, cannot heal it. There are self-help programs with various steps to peace, but they cannot heal it, nor can religion. The effects of the broken heart only can be lessened or managed by these methods.

Matthew 9:12 But when Jesus heard that, he said unto them, They that be whole need not a physician, but they that are sick.

← A New Spirituality for a New Humanity: Technology and the Creation of Gods
Parenting in the Land of Moloch →