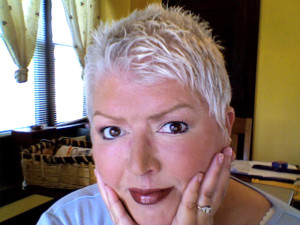 Sharon and her husband Derek are the remarkable talents behind PID Radio and View from the Bunker, two popular internet radio programs that helped to pioneer ‘netcasting’ and draw faithful audiences from across the globe each week.

Long before meeting Derek online in 1997 (ask her about it sometime), Sharon studied opera theater at the University of Nebraska in Lincoln, singing roles as diversified as the evil but doomed ‘Witch’ from Humperdinck’s Hansel and Gretel, to the sullen and secretive ‘Secretary’ from Menotti’s The Consul, and the befuddled ‘Miss Todd’ in another Menotti favorite, The Old Maid and the Thief.

As if music weren’t enough, in 1994, Sharon earned a top-honors degree in biology with molecular emphasis from James D. Watson’s alma mater, Indiana University. She is the author of The Laodicea Chronicles and The Armageddon Strain, and she is a contributing author to several non-fiction works under the Tom Horn banner including God’s Ghostbusters and Pandemonium’s Engine.  She scours the net for news and tidbits for the Gilbert House online Christian news site, PID News. She is an avid fiction fan and has published her own take on spiritual warfare in her novels Winds of Evil, The Armageddon Strain, Signs and Wonders, and a new serialized book available only here at SkyWatch Magazine, Skinwalkers.

Now that the Gilberts have joined the team at SkyWatch TV, Sharon’s added her design and web talents to publication of this magazine as well as planning the upcoming women’s talk show, SkyWatch Women, which should premier late in 2015/early 2016.

Sharon’s beautiful and talented stepdaughter Nicole studies graphic design in St. Louis. Sharon and Derek have been married since 1998 and currently reside in southwest Missouri. If you drive past their house, you might hear even Sharon practicing opera in the barn while Sam T. Dachshund joins in with howling approval.