FOR WHOM THE BAAL TROLLS (Pt 3) 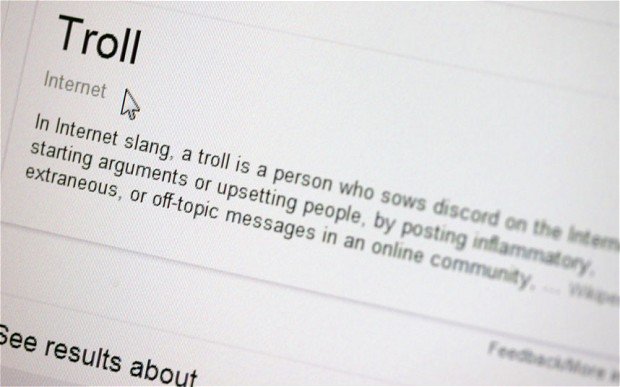 In our 1998 book, Spiritual Warfare: The Invisible Invasion (download free in our store at http://www.skywatchtvstore.com/ForbiddenGates-p/fg.htm ), we documented how, throughout history, entire geographies became strongholds of demonic activity as a result of what governments and citizens were willing to tolerate in foreign, domestic, public, cultural and social policies. Specifically, we cited biblical examples like the city of Pergamum, which Scripture identified as having become a seat of satanic influence (Revelation 2:12–13). More recent examples would include the history of Nazi Germany and similar cases. What does this have to do with Internet trolls? This phenomenon—territorial demonization—also occurs on a small scale, wherever space or property (real property including home office space, land, personal property as in possessions, commercial property, public property, and even intellectual property) is provided for purposes hostile to moral or biblical law.

As an example, many years ago as young Christians, we walked through a local mall during the Christmas season and came upon a New Age bookstore conducting a grand opening. In a derisive tone, I (Tom) said to my wife Nita, “Can you believe the lack of intelligence of some people?” I strolled casually into the store, snatched a book from the shelf, and began offering sarcastic commentary as I read from its pages. I could tell my wife was uncomfortable with what I was doing, so I placed the book back on the shelf and proceeded out of the store. Suddenly, a dull sensation hit the pit of my stomach and shot upward through my chest into my cranium. My head started spinning, powerful nausea took hold, my hands began to shake, and I could tell I was about to collapse. It was literally as if something invisible had jumped on me and was injecting rapidly spreading poison throughout my body. Feigning interest in sales items, I moved away from the shoppers and began praying under my breath, asking for forgiveness for my smart attitude, for my lack of caution, and for my lack of concern for the lost. I prayed for deliverance from evil and for healing of my body and mind. After more than an hour of such intercession, I was finally restored. As a young preacher, I discovered a valuable lesson that day: The princes of this world are powerful and territorial, and we should enter spaces that have been dedicated to them only with the proper attitude and when guided by the Lord.

Even then, experiences with exorcism many years later taught me that Satan’s jurisdiction and legal rights to property and people are extrapolated to an entirely different level when the phenomenology involves inner space as opposed to external, physical territory. This is because “habitable space” and spatial occupancy—the amount of substance (or demons, in this case) that can fit into a specific area—are different between material and spiritual dimensions. A unique argument, one that has existed since the Middle Ages and highlights this concept, involves the question of how many angels can fit on the head of a pin, illustrating that even the ancients pondered advanced physics, space-time, quantum gravity densities, relativity theory, and hyperdimensional materiality (though the ancients knew nothing of these terms), allowing for different maximal density of “beings” within what otherwise appears in the physical world to be the same “space.” Dr. Anders Sandberg, in the research paper, “Quantum Gravity Treatment of the Angel Density Problem” for the Royal Institute of Technology in Stockholm, Sweden, actually derived a number for the density of angels at critical mass that could fit on the head of a pin. He arrived at 8.6766*10exp49 angels (3.8807*10exp-34 kg), thus theoretically fixing through physics how an entire legion of demons (forty-two hundred to fifty-two hundred spirits, plus auxiliaries) in the fifth chapter of the New Testament book of Mark could possess the inner space of a single man.[i]

An important question related to this mysterious relationship between people surrendering inner and external territory to evil spirits—and the boundaries of that association—involves the difference between those who are deceived into unwittingly giving place to the devil and thus become “demonized,” and those who knowingly form alliances with evil supernaturalism, such as many Internet trolls achieve. The contrast between these types of persons may be defined in the 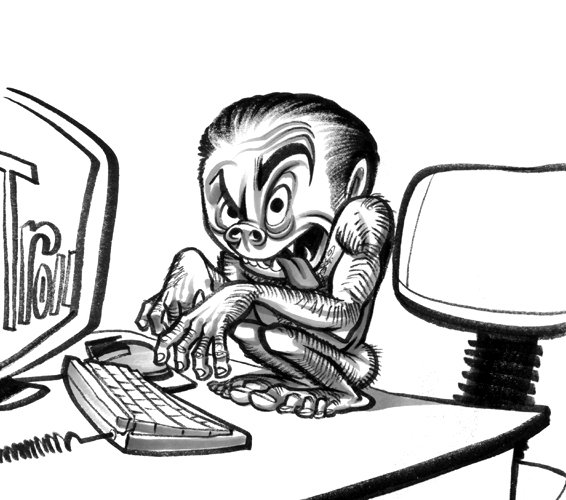 most frequent New Testament expressions used to refer to demonic possession: 1) daimonizomai, meaning “to be demonized”; and 2) echon daimonion, which means “having a demon,” and can actually denote a person who possesses the demon, not the other way around. In the Bible, this might describe persons like Saul, who sought out a woman possessed by a “familiar spirit” to summon the deceased Samuel, even though he knew God’s commandment not to allow such practices in Israel (1 Samuel 28), and possibly Judas Iscariot, into whom “Satan entered” (Luke 22:3) as a result of his decision to do what his heart may have told him was betrayal of God. In echon daimonion, it is therefore one of the premises that territory (including one’s computer room at home) can be surrendered to evil spirits by persons actually reaching out to and “taking hold of the demon” through willingly choosing to do what they otherwise know is satanic (as in “trolling”). That some people are not only aware of this marriage with evil, but energetically nurture it, is difficult for most of us to understand—yet the reality exists and is growing. An example of one such person was brought to us for treatment decades ago while we were still involved with exorcism. It involved a young woman who was released from a mental institution to spend a week under the care of her family, and her family, who sought help from the church because they believed her condition was the result of diabolical possession. Having been approached by a relative of the girl, we were told how, over time, she had become withdrawn and eventually delusional. She began hearing voices and held lengthy conversations with what appeared to be empty rooms. Finally, her condition became so detached from physical reality that she had to be placed in a psychiatric facility. As time went on and her condition worsened, prayer for her by her family was met with hostility and then outright violence, and her parents were desperate for help. After consulting with our group, an agreement was reached to have the young woman brought in for evaluation. We requested privacy and asked that a limited number of family members be present. Her caregiver agreed, and the story of the girl and what happened that week remains private. What we can say is that hers was the only case ever examined by our group in which the rare determination was made that while this person was truly possessed, exorcism was not an option. The simple reason was (the reader would understand if the unthinkable facts could be published) that she actually wanted the demons. They had a right to be there.

Interestingly, some years later, Nita and I were back in the same city and noticed that our host pastor looked tired. We asked him if it had been a busy week, and he proceeded to tell us about an exorcism he had participated in a few days earlier. As he recounted the story of a certain possessed woman and how the church had fasted and prayed for a week, followed by seventeen hours during which a select group of ministers in a private room drove multiple demons from her, we realized he was talking about the girl from the institution. We remained quiet as he repeated the exhausting story, telling of the many personalities and voices they encountered during the drawn-out ritual. He claimed that when the last spirit finally came out of her, she sat up and for the first time appeared lucid. When they asked her if she wanted to accept Jesus as Savior, she began cursing and crying, complaining that he and the others had made her friends go away. Through chest-heaving sobs, she began calling out to unknown persons by name. As she did, the pastor said he felt something move across the room into her. Her eyes rolled back, and once again she lost control of her faculties. The exorcism ended.

While the experience above is a glaring illustration of one aspect of echon daimonion, in which a person seeks out and “possesses the demon,” over the years when on those few occasions we witnessed what was considered authentic possession (as opposed to most cases evaluated as psychological or biological issues), it was typically daimonizomai, wherein the individual did not want to be under the spirit’s influence.