FOR WHOM THE BAAL TROLLS (Pt 5) 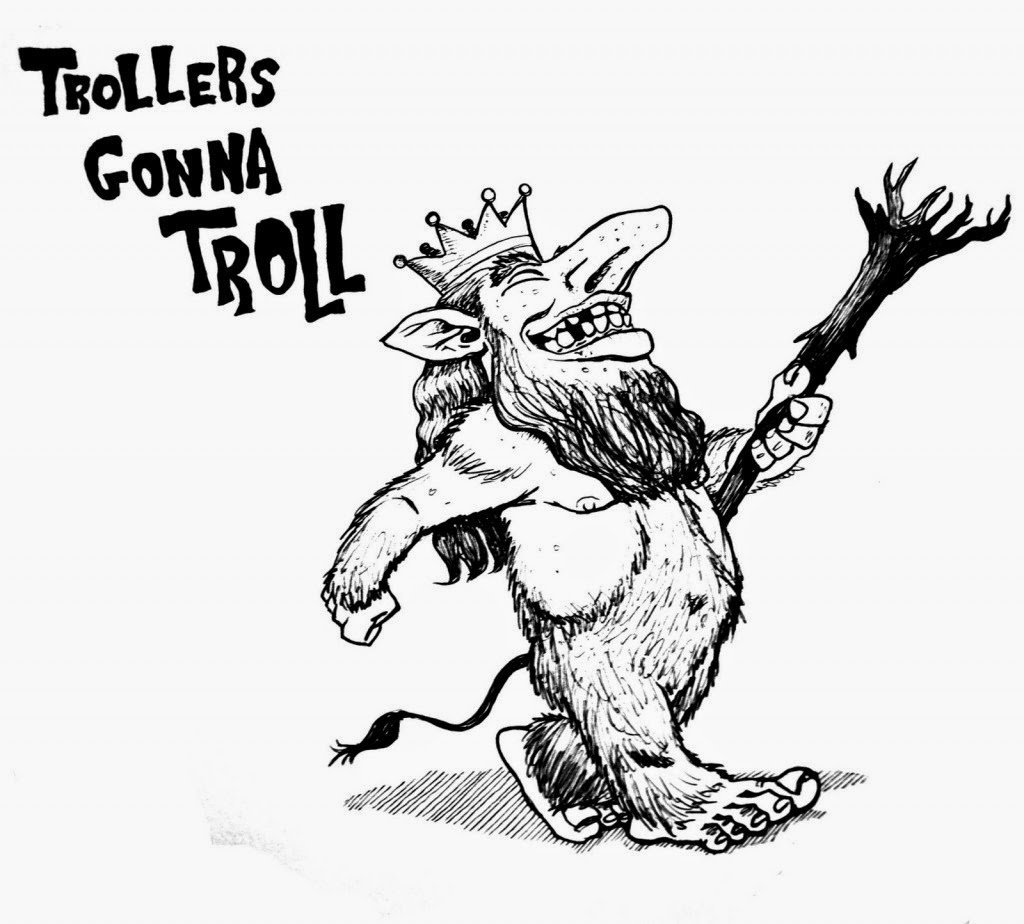 During the decades my wife and I served the institutionalized church as pastors and later as executives, we (like most ministry leaders obviously would be) were certainly aware of “trolls” even before the modern usage of that term was defined.  We witnessed the two types of “believers” the Bible calls the “wheat and the tares,” and have strong memories of the spiritual differences between the two. Before our house burned down in 2011, while searching for a particular document we had placed in an old photo album some time ago for safekeeping, we took an unexpected stroll down memory lane in this regard. We had gone through at least a dozen books of images and old newspaper clippings, seeing members of churches we had pastored and records of events frozen in time from nearly thirty years inside the organization. Finally, between dusty storage bins and spiderwebs, we found what we were looking for. We placed the coveted item among the research notes for a future book, then returned everything else to the closets.

That should have been that, but for the next week, the old memories in those boxes kept calling to us about things and friends from the past—people who represented the true mission of the church and were wonderful examples of what it really means to be a Christian. Their names would not be recognized by most today—dedicated believers like O. R. Cross, Henrietta Stewart, Lorraine Morgan, Wyoming Rosebud Dollar, C. K. Barnes, Eugene and Evelyn Fuller, Annie Walton, Eugene Stockhoff, and numerous others of the New Testament clan.

And then there was another group hiding in plain sight among the believers, sometimes even leading them—the ones the Bible calls “clouds without water, carried about of winds; trees whose fruit withereth, without fruit, twice dead, plucked up by the roots” (Jude 1:12).

Among this second class were—and still are—some fantastic heretics we have known.

Take our old friend Carlton Pearson, for instance. When we were pastoring near Portland, Oregon, during the eighties, our church was the host for TBN’s West Coast broadcasts and special events in which some of America’s top evangelists—including Carlton—appeared almost nightly for a while. In those days, the church was in flux. The Great Generation with its faith of the fathers was getting older, and errant doctrines made delicious by these nasty end-time agents known as daimonions were finding more and more willing hearts who were having the time of their lives abandoning solid theology in exchange for such teachings as the “Doctrine of Inclusion” (in which nobody goes to hell), eventually branding such false prophets as heretics (including Carlton Pearson) among thoughtful evangelicals. We can tell you that Carlton didn’t start out that way. He was a sweet man with a heart of gold who unfortunately lost his way and embraced delusion. God only knows how many he has since led astray.

Then there were those who adopted things far worse than “Inclusion”—for instance, “Kingdom Age” theology (also known as Reconstructionism, Kingdom Now Theology, Theonomy, Dominion Theology, and most recently, Dominionism), which singularly has wrought some of the most far-reaching destruction within the body of Christ this century.

Given the upcoming 2016 US Presidential election, Dominionism is something Christians need to understand for the type of hyper-Calvinism (though supported by both reconstructionists and nonreconstructionists) it is, which ultimately seeks to establish the Kingdom of God on earth through the union of politics and religion. Though we as American believers have opportunity (and one could even argue, responsibility) to vote for and support moral leadership, we need to balance that temporal concern with the more important eternal knowledge that our true “kingdom” is not of this world, and that combining religious faith with politics as a legislative system of governance such as Dominionism would do hearkens the formula upon which Antichrist will come to power! Note how in the book of Revelation, chapter 13, the political figure of Antichrist derives ultranational dominance from the world’s religious faithful through the influence of an ecclesiastical leader known as the False Prophet (BTW—this could be concerning given how the current US President wants to lead the UN after his present term expires, and Pope Francis is looking for a global political leader to join him in 2016 to push their mutual agendas . . . but that is a subject Cris Putnam and I will take up later this year). Similar political enthusiasm exists among revived Dominionists going into 2016, despite the fact that neither Jesus nor His disciples (who turned the world upside down through preaching the gospel of Christ, the true “power of God,” according to Paul) ever imagined the goal of changing the world through supplanting secular government with an authoritarian theocracy. In fact, Jesus made it clear that His followers would not fight earthly authorities purely because His kingdom was “not of this world” (John 18:36). So while every modern citizen—religious and nonreligious—has responsibility to lobby for moral good, that should NOT be the MAJOR focus of believers. I would go even further and suggest that, combining the mission of the church with political aspirations is not only unprecedented in New Testament theology—including the life of Christ and the pattern of the New Testament church in the Book of Acts—but often a tragic scheme concocted by sinister forces that seek to defer the church from its true power while enriching insincere bureaucrats. 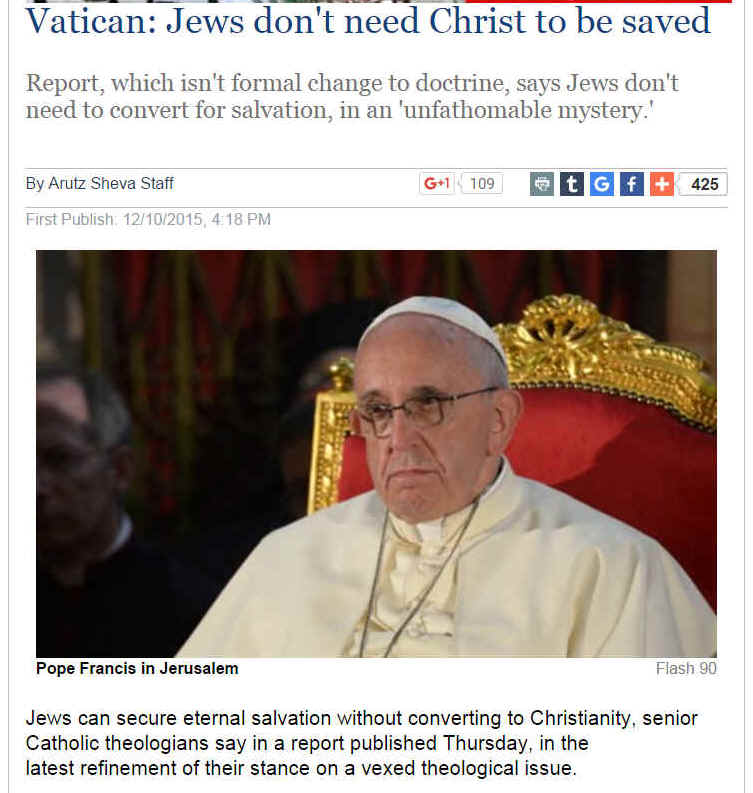 But while great heresies like Dominionism and Inclusion are, or should be, self-evident, other contenders for the most spectacular doctrines of devils in the church today would have to include Ecumenical Environmentalism and Dual Covenant (wherein Jews do not need to accept Jesus as Messiah), which has been aggressively espoused by the Vatican under Pope Francis and Emeritus Pope Benedict as well as allegedly some surprisingly well-known modern evangelical preachers. Yet those aged voices that called out to us recently from our fading boxes of memories also reminded that while it’s easy today to get an “amen” while condemning the big lies of Dominionism, Ecumenical Environmentalism and Dual Covenant, the most insidious doctrines are those “smaller lucifers” that are often harder to perceive. For instance, how easy it is (and was) to see through the glaring examples of self-serving and lavish lifestyles that some of our old televangelist friends sought support for, while overlooking or even excusing Luciferianism (selfishness) that is measured in the tiniest of portions, minute amounts so cleverly concealed within subtle and popular doctrines today that they are nearly impossible to detect.

Ask any evangelist who has tried to take the gospel outside the four doors of the local assembly what we mean by this and hear them repeat stories of how quickly certain church members arose to resist the plan and grumble over the resources that could otherwise be used to benefit them. This is the cancer that decades of Prosperity Preaching, inward focusing, and entitlement “me-ism” have produced. Of course, most of these anti-evangelists wrap their Luciferianism in nifty religious phrases—like Judas Iscariot did when he pretended to care for the poor but secretly wanted to steal the value of the oil that was used to anoint the feet of Jesus (John 12:1–6). These types resemble Judas in another way as well: They don’t even know how they are thus being used as fleshy gloves, the earthen hands of that invisible spirit, the master of waterless clouds operating within or behind them that hates true fishers of men. But for those with eyes to see, the father of lies (and his trolls) always gives himself away through his envy of others, seeking what he can gain from—not what he can give to—believers and religion, then pretending something is wrong with those he cannot control, those who get things done like Jesus did, disparaging them while he himself accomplishes nothing but division, diversion, and destruction.

Perhaps you have seen this spirit in the actions or heard it in the mouths of people you thought were your partners. When once you (or somebody you knew) had nothing more to give them, they turned away from you—or worse, against you—and revealed the awful truth: Their religious spirit had only ever come for what it could get, gain, and absorb, and when there was nothing left to take, it turned to do what it had always planned, “to kill and to destroy” (John 10:10a). This is because, as Jesus Himself put it, such are the children of murder: “[They] are of [their] father the devil, and the lusts of [their] father [they] will do. He was a murderer from the beginning, and abode not in the truth, because there is no truth in him. When he speaketh a lie, he speaketh of his own: for he is a liar, and the father of it” (John 8:44).