(EDITOR’S NOTE: OVER THE NEXT COUPLE WEEKS A SHORT ONLINE SERIES WILL BE POSTED IN THE LEADUP TO THE FINAL ENTRY BY TOM HORN AND CRIS PUTNAM REGARDING THEIR 4-YEAR INVESTIGATION INTO THE VATICAN, THE FINAL POPE PROPHECY, THE SECRETS OF MT. GRAHAM, THE LUCIFER DEVICE, AND AN IMMINENT WAR THAT POPE FRANCIS & THE MYSTICS BELIEVE WILL RESULT IN THE ARRIVAL OF THE FINAL ROMAN EMPEROR OF ANCIENT CATHOLIC PROPHECY) 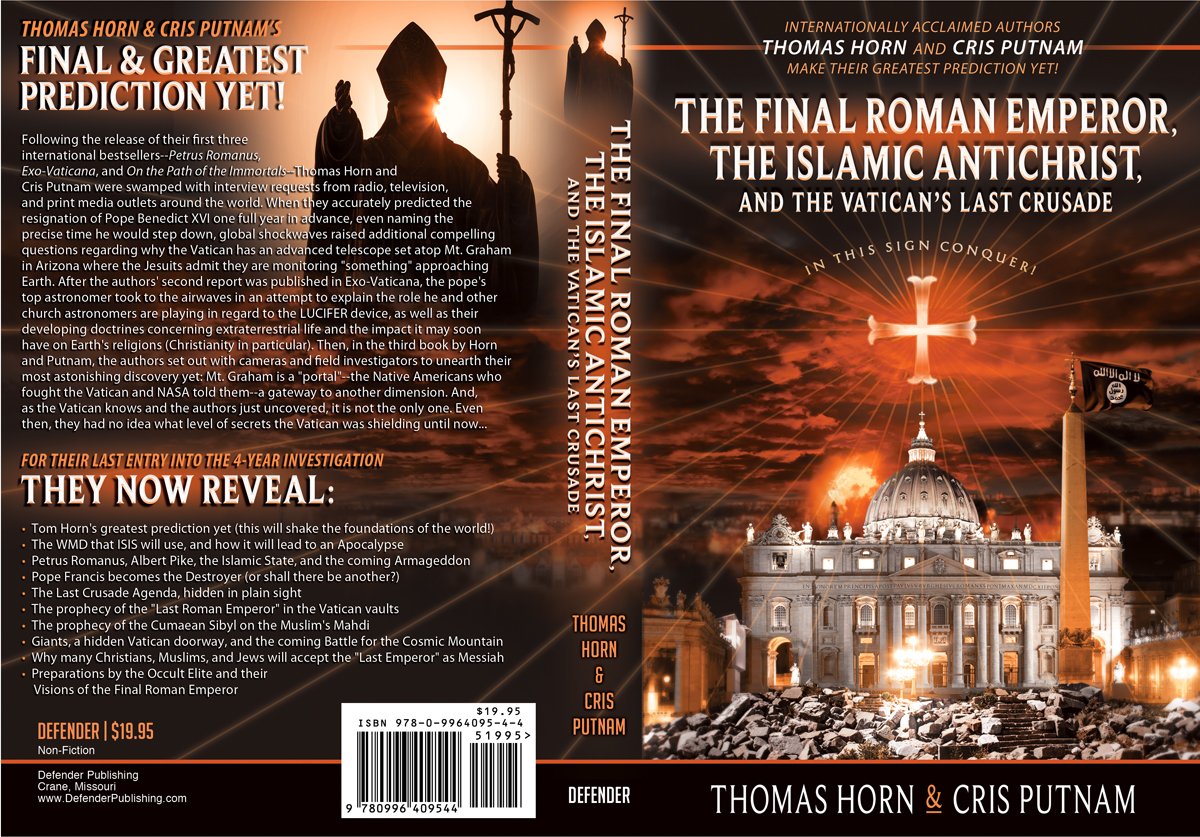 Following the release of their first three international bestsellers–Petrus Romanus, Exo-Vaticana, and On the Path of the Immortals–Thomas Horn and Cris Putnam were swamped with interview requests from radio, television, and print media outlets around the world. When they accurately predicted the resignation of Pope Benedict XVI one full year in advance, even naming the precise time he would step down, global shockwaves raised additional compelling questions regarding why the Vatican has an advanced telescope set atop Mt. Graham in Arizona where the Jesuits admit they are monitoring “something” approaching Earth.

After the authors’ second report was published in Exo-Vaticana, the pope’s top astronomer took to the airwaves in an attempt to explain the role he and other church astronomers are playing in regard to the LUCIFER device, as well as their developing doctrines concerning extraterrestrial life and the impact it may soon have on Earth’s religions (Christianity in particular).

Then, in the third book by Horn and Putnam, the authors set out with cameras and field investigators to unearth their most astonishing discovery yet: Mt. Graham is a “portal”—the Native Americans who fought the Vatican and NASA told them—a gateway to another dimension. And, as the Vatican knows and the authors uncovered, it is not the only one. Even then, they had no idea what level of secrets the Vatican was shielding until now…

FOR THEIR LAST ENTRY INTO THE 4-YEAR INVESTIGATION THE AUTHORS WILL UNVEIL:

In PART ONE of this short series I detailed how years ago I died and went to Heaven where God ‘sealed revelations’ within me in accordance with Job 33:15–17. 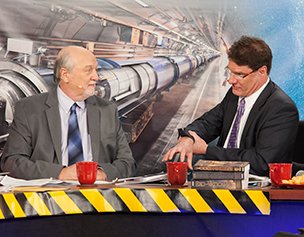 TOM HORN WITH CRIS PUTNAM ON THE “CERN” SET

In the Bible it is clear that God does “seal” knowledge, wisdom, and revelations in the hearts of those who follow Him. That these concealed truths can be “quickened” or made alive at the right moments as they are needed is depicted in such texts as Matthew chapter 10:19–20, where Jesus says to His disciples: “But when they deliver you up, take no thought how or what ye shall speak: for it shall be given you in that same hour what ye shall speak. For it is not ye that speak, but the Spirit of your Father which speaketh in you” (emphasis added). That this reflects a deep partnership between our personal devotions and studies (2 Timothy 2:15; Psalm 119:11) and the indwelling Holy Spirit as part of the mystical union God holds with all members of the true Church—the Body of Christ—can also be seen in Proverbs 3:6, which says, “In all thy ways acknowledge him [that’s us doing our part], and he shall direct thy paths [His part].” Again in the book of John (6:63) it refers to the Holy Spirit as the one “that quickens” (Greek zōopoieō—“to cause to live, to make alive at that moment”) the Word of God as well as those “sealed instructions” that Job talked about.

I’m not sure how this experience plays out for others, but several times in my life and at times completely unexpected, I have been jolted from my sleep at night in bed with an astonishing glimpse that I believe is taken from that original storyboard God gave me years ago, and about which I begged Him to not “let me forget.” On one occasion, for example, I was shaken from sleep by a very powerful and detailed list of things that would happen in the former religious institution I had been an executive in. I jumped from bed, wrote down the vision as I had seen it—including names of people who would be involved and exactly what they would do and how it would greatly damage the ministry if the district leaders did not intervene (they didn’t, and it did damage the ministry)—and then I sent that detailed letter to the state superintendent. I also gave a copy to my son, Joe Ardis, and to my wife, Nita. Within three years, everything played out exactly as I had seen it, down to the smallest particulars. In fact, it was so precise that it shook Joe deeply, causing him to come to me afterwards to express his utter amazement as to how it could have been possible for me to foresee such comprehensive events with such accuracy.

WATCH THE TRAILER FOR THE NEW BOOK AND FINAL ENTRY!

A more recent quickening revelation is one that the world somewhat knows about now involving how me and Cris Putnam were able to very precisely predict the historic resignation of Pope Benedict in our book, Petrus Romanus: The Final Pope Is Here, as well as on television and radio a year in advance.

This began with a series of preternatural events too long to list in this book, but of which ultimately brought me and Putnam together to investigate and write our first best-seller, Petrus Romanus. During the research phase of that work, Putnam uncovered the obscure manuscript of a Belgian Jesuit, Rene Thibaut, who predicted sixty years in advance that the papacy would change hands in 2012 based on his understanding of the nine-hundred-year-old prophecy by St. Malachy that we were studying. Putnam worked diligently to translate Thibaut’s work into English and to verify his mathematical (and mystical) calculations using a software spreadsheet and language translator.

At first, we found Thibaut’s speculations interesting partly because of the year 2012, which the world was abuzz about in the lead-up to that date. But as we made inroads behind the scenes with Catholic academics and historical artifacts, we began to believe something much bigger was afoot and that either the Malachy prophecy was genuine (that is, it was either divinely or demonically inspired) or that some of the Cardinal electors believed it was genuine and were consequently electing popes down through the years who could somehow be seen as fulfilling their lines in the prophecy, and therefore it had become a self-fulfilling oracle.

It was during this time that one night I was, once again, rattled from sleep and instantly convinced that Putnam had been led by God to make this discovery and that, in fact, Pope Benedict would indeed step down in April 2012 using “health reasons” as a cover for abdication. We went on television and radio in 2011 (and out on a limb, quite frankly) as the book was being written and rushed through editing, typesetting, and print, so that it could be in stores before the anticipated resignation of the pope. We wrote specifically on page 470 of Petrus Romanus that Pope Benedict would “likely” step down in April, 2012, but in media (which people can watch on YouTube in numerous interviews from 2011) we were more insistent that not only “could” it happen, but, we predicted, it would.

As the year 2012 came and went and neither Pope Benedict nor the Vatican made any announcement that he was stepping down, I thought—perhaps, for the first time since I had woke up dead in heaven years earlier—the “sealed,” Job-like “instructions” mechanism had either not worked or that I had been mistaken. Yet as the months passed I somehow remained convinced that we had seen the vision correctly…I would email Putnam, declaring, “It’s not over till it’s over,” while at the same time saying to myself, What are you talking about? Benedict is still the pope!

Then something happened that the world now knows about—on February, 28, 2013, at 8 o’clock in the evening, the resignation of Pope Benedict was announced by the Vatican, which immediately gave the New York Times an interview in which they made the following astonishing admission: Pope Benedict had secretly and officially tendered his resignation to select members of the Curia in April 2012…just as Putnam and I (and Thibaut, and the quickening!) had said he would. (This was an event that had not happened for hundreds of years, and one that everybody was telling us would never happen again…that is, until it did.) This was immediately confirmed by Giovanni Maria Vian, the editor of the authorized Vatican newspaper, L’Osservatore Romano, who wrote that the pope’s decision “was taken many months ago,” after his trip to Mexico and Cuba ended in March 2012, “and kept with a reserve that no one could violate”[i] (meaning it was to remain top secret and was to be known only to a handful of trusted Vatican cardinals until preparations for Benedict’s housing and the public announcement was ready).

This revelation was astounding! Putnam had been led by God to uncover the trail, Thibaut had mystically speculated the event sixty years in advance, and the quickening had confirmed for me this historic event with pinpoint accuracy all ahead of time. Media everywhere went crazy! My office phone did not stop ringing for weeks with top media from around the world (including major outlets within Rome) wanting to interview us to ask “who our insider at the Vatican was.” CNN begged me to come on their program, which I declined. The History Channel pleaded with us to participate in a special series, and Putnam agreed, and so on. But why am I talking about this now? Is it so we can pat ourselves on the back and brag about how incredibly accurate our prediction was?

I’m raising this issue now because there has been another quickening, and this time it involves the current Pope Francis—the last Pope, Petrus Romanus, according to the Malachy list. (Or is he!? More on that question later.) This quickening also encompasses the revelation I will shortly detail as being much bigger and more concerning than the last one was, and yet it is with the same level of confidence I had when we foresaw that Pope Benedict would step down that I, Tom Horn, will convey what I predict is going to happen over the next 48 months.

COMING UP NEXT (PART 3)—ISIS, the Final Roman Emperor, and the Next Prediction 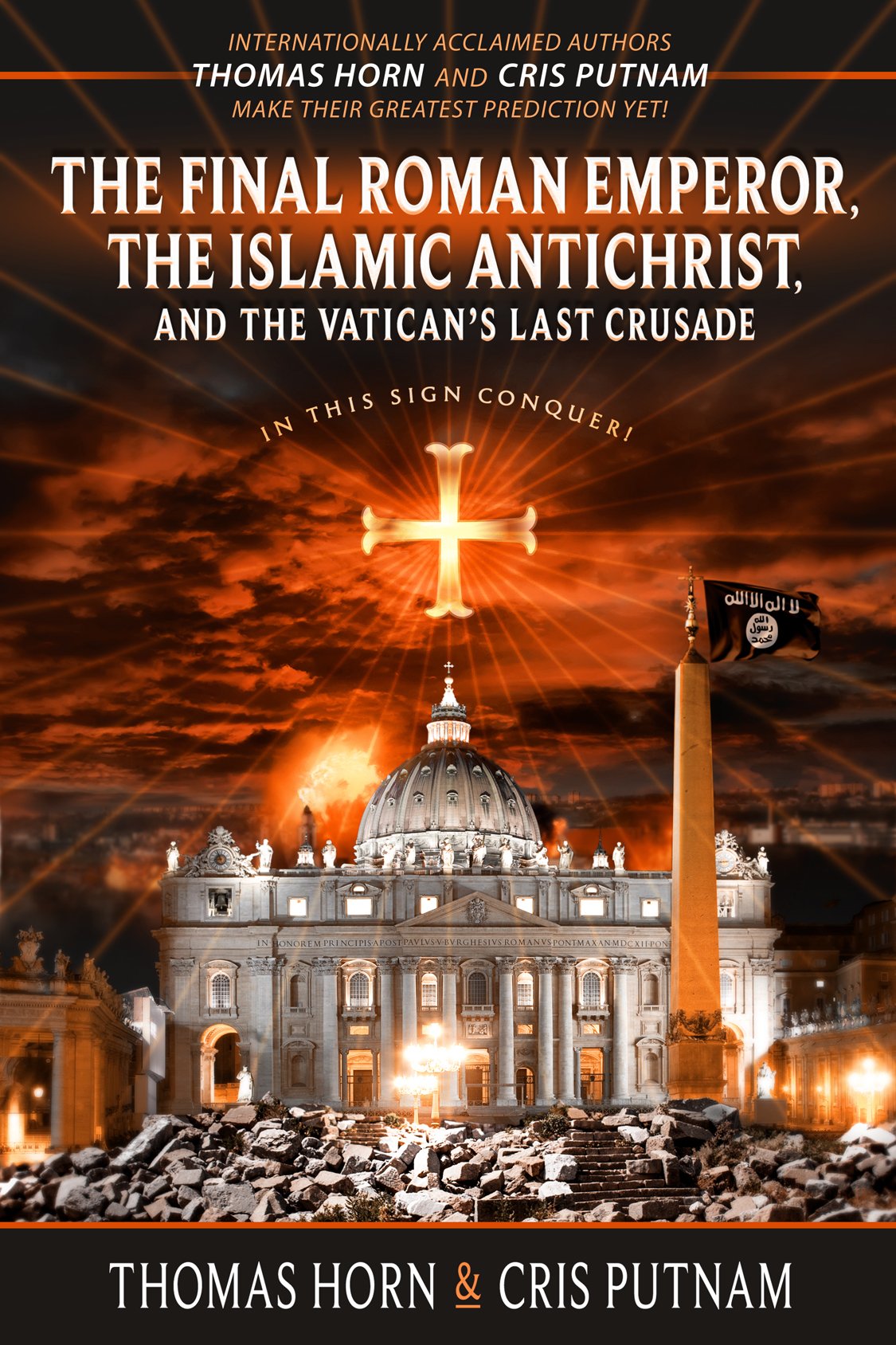 COMING SOON WITH THE BIGGEST GIVEAWAY OF 2016!