In the last entry we introduced the twin tunnels of the Gotthard Base Tunnel and the deeply occult ceremony held in Switzerland not far from CERN. In this entry let’s examine each phase of this live-streamed rite. It commenced with the interfaith blessing as mentioned earlier. Following this invocation of the triple-goddess, the shepherd aroused the horned man, who strutted into the scene (complete with eerie red lighting and smoke—like he’d risen from the Abyss), accompanied by his hellish friends—many engaged in ritualistic sex and poses. This parade of promiscuity also included a creepy “angel” that flew over top of some of the miners (presumably, representing the nine who died). Once the first phase (we’ll call it the opening of the portal) concluded, the various religious and political dignitaries boarded the train and headed toward the northern terminus at Erstfeld. Note, that the choice to begin in the south and end in the north represents the ascension of something to the surface, that is the opening of the Abyss.

The primary performances took place on a massive outdoor stage in Erstfeld. This small city lies within the canton of Uri in Switzerland. (Uri, by the way, is a type of extinct bison, echoing the “horned” theme once again). As the dignitaries settled into their comfortable bandstand seats, a display lit up, showing what looked like a huge rock mountainside. Dancers dressed as miners “climbed” this rock face and dug into the earth, so to speak, to unveil what was beneath: a great machine, formed from human arms, that rotated and churned into various shapes and designs, many of which resembled the Large Hadron Collider at CERN.

Once this “opening” is achieved, the miners strip off their orange jumpsuit attire (males only at this point, who are now bare-chested) and take up “arms”; that is, they use staves to perform a dance routine that looks like warfare. Once this battle concludes, a group of women join the man (the women wear only white underwear), and the entire dance troupe engages in a frenzied display amidst a cloud of dust (simulating smoke, perhaps?) This frenetic dance arouses a giant.

Clearly, this endeavor is far more than Switzerland’s braggadocio about an engineering feat! The connection between CERN and ritualistic summoning of a sleeping giant (the “horned god” of Cernunnos or even Melkart—both are types of the rising/dying god, and Melkart “slept” for half the year, which may be why Elijah told the priests of Baal to “call louder,” because he might be sleeping).

As the giant wakens, the dancers perform ritualistic sex rites, many homosexual in nature. Following this simulated copulation, the dancers fall to the floor as if dead.

On the screen behind the dancers, you can see three men dressed as miners. Just as the dancers have died, these men also “die” after being chased by something that looks like smoke. The three men (representing perhaps the nine who died in the construction of the tunnels) fall down a deep hole, as if traveling to hell as a sacrifice, while the dancers (now revived), continue their debauched choreography. As the dead miners descend, they are met with giant hands:

We then see three ghostly female dancers arise from the pit:

As these ghostly women fly above the dancers, a giant eye forms behind them on the screen, and below a troupe of similarly ghostly dancers enter the stage area, wearing veils and skirts. At this point, men begin to assume female attire, demonstrating a reversal of traditional morals and roles as the spirit of the Abyss takes over. Whirling dervishes accompany these strange dancers, along with men wearing costumes that make them look as if they are covered in animal hair or straw. These strange “Cousin It” types creep alongside a long line of musicians who bear Alpine horns. It’s clear that the strange mashup of Alpine with Middle Eastern traditions is intended to show an international revelry welcoming the risen “god” from the Abyss.

Behind the musicians and ghostly dancers, the horned god makes his grand entrance to the stage, and following him (as if to bless him) is the first of the triune goddesses: the Maiden. She is dressed in virginal white, and she trails behind the horned Cernunnos, “Goat Man.”

Like Krampus, the Goat Man wears a cutaway tuxedo with a red carnation, representing his assimilation into our modern culture:

As the Goat Man dances with the strange collection of humanity on the stage below, his image is also displayed on the monitor screen behind the troupe, showing the “true demonic spirit” behind the world’s return to pagan worship:

Notice that three scarabs fly before this screaming face (the spirit of Antichrist). Scarabs represent rebirth in Egyptian culture. The screen again changes, and the massive Antichrist face becomes a vortex of eyes. This Antichrist New World Order will shut down all free will, and the citizens of the world will be watched (the Watchers) every moment of every day.

As these Watchers rise up from the Abyss, the Goat Man embraces the Maiden, impregnating her. He is then declared to be king as all bow down to worship him.

As with many pagan pantheons, the king then dies (remember that the “horned man” is a type of rising/dying god, and many of these deities (once dead) are replaced by a child (Osiris/Horus, Nimrod/Tammuz are examples). After the Goat Man’s “death,” we see a strange Goat Child appear off to one side of the stage (as if he exists in a separate place):

Now that the Goat Child has been conceived, a chorus of men and women (some cross-dressing) bring offerings of greenery and branches, and roots begin to appear on the large screen behind the main stage.

The massive roots in the program show the occult inversion of the Tree of Life, and within a few moments these roots transform the world into a massive machine. Men dressed as miners stand upon large pistons, and cogs within the great machine interconnect and drive these pistons. The New World Order that has been set into motion by the summoning of the satanic Goat Man culminates with the reappearance of the Maiden, now adorned in blood red and heavily pregnant (the second face of the triune Goddess). She is the Whore of Babylon, ruling a world of imprisoned humanity:

Note the horned figure just behind the Whore dancer. The Goat Man is now a Goat Woman, again indicating a strange reversal of the old order. The ancient Watchers whom pagans worshiped as gods had the power to take both male and female forms, giving rise to the belief in “twins” (Hermes/Aphrodite is one example of a twin god). As the Whore gives birth, the Goat Man appears to revive, only now his “goat head” has been removed, making him appear more human. Remember, the Antichrist will appear to revive from a fatal “head wound,” and once resurrected, will be worshiped by all the world.

Note the inversion of form here. Men are dressed as women and women as men. The New World Pagan Order will stand the Judeo/Christian world on its head, and the old gods will return to enthrall mankind using drugs, rampant sexual “freedoms,” and secret knowledge.

This bizarre opening ceremony cost Switzerland eight million euros to stage—a ridiculous amount considering the economic crisis facing nearly every nation of this bloc. Sacrifice, sex magic, and science (CERN) form the hellish trinity of practices revealed in this detestable display. Who in their right mind would spend even one euro on such a strange ceremony? Clearly, this live-streamed event was intended as a worldwide ritual and not a celebration of engineering.

The Goat Man is waiting to rise, and Switzerland’s ritual tells us that unregenerate mankind will welcome him when he emerges from the pit. The triune goddess will ride the “beast system,” and though this crazed play shows an ecstatic world population that works together like a well-oiled, debauched machine, the truth is far more insidious. The Goat Man, the Antichrist, will enslave mankind using his own lusts as a key.

The beast you saw was, and is not, but is about to come up from the Abyss and then go to destruction. The inhabitants of the earth—all those whose names have not been written in the book of life since the foundation of the world—will be astounded when they see that the beast was, and is not, but is to come (Revelation 17:8, NET, emphasis added).

We delve into dark passages with hands created by God Almighty. How He must weep at mankind’s debasement of His marvelous design.

COMING UP NEXT: CERN’S OCCULT CONNECTION 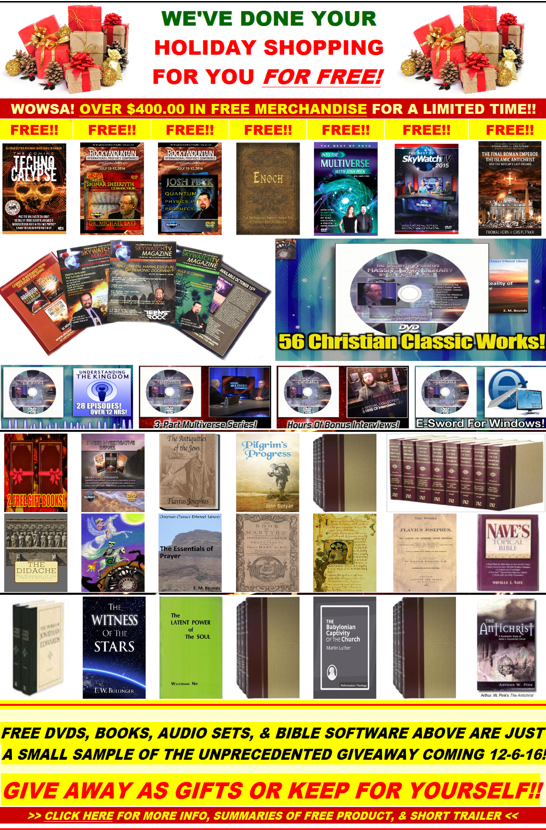