NEW BOOK, DOCUMENTARY, AND CONFERENCE TO FINALLY UNEARTH TRUTH BEHIND “THE GREAT SMITHSONIAN COVER UP” (PART 1) 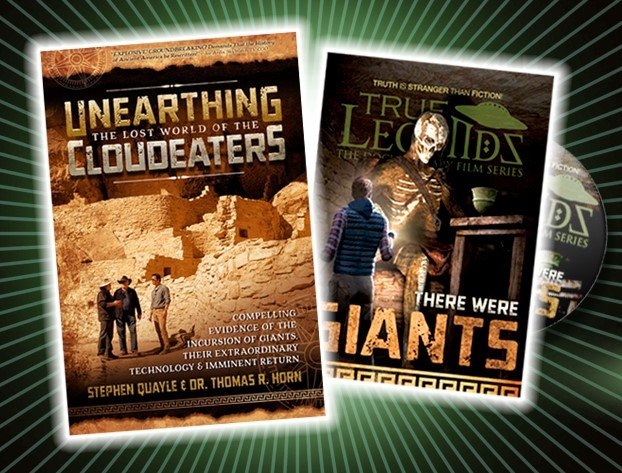 Starting this week, SkyWatch TV begins a series of televised investigative interviews with Steve Quayle, myself, and our respective teams that will slowly uncover over the following weeks trailblazing research we’ve been secretly working on since 2016. You will be hearing a lot about this in major media this year. Besides giant interlopers who traversed the Atlantic Ocean and secret Anasazi routes to corrupt earliest Americans with portal-opening sorcery, human sacrifices, ritual cannibalism, and the technology of the fallen ones, fresh ground is finally broken into the so-called “Great Smithsonian Cover Up.” For those who may not know what I mean by a Smithsonian ‘Cover Up’, let’s start with what we all now know was a giant hoax.

On December 3, 2014, one of the World Wide Web’s most popular and misleading articles of all time was published by World News Daily Report: “Smithsonian Admits to Destruction of Thousands of Giant Human Skeletons in Early 1900s.” In this article, it was claimed that the U.S. Supreme Court had issued a ruling that the Smithsonian was to release classified papers to the public proving their cooperation in the covert concealment/destruction of gigantic human bones in order to uphold our mainstream concepts of human evolution. This so-called evidence—involving, but not limited to, a “1.3 meter long human femur bone” unearthed in Ohio and brought to the court hearing—would, the article said, “help archaeologists and historians to reevaluate current theories about human evolution and help us greater our understanding of the mound builder culture in America and around the world…[and further states that] after over a century of lies, the truth about our giant ancestors shall be revealed.”[i]

Not surprisingly, an article of this sensational magnitude immediately found its way to social networking newsfeeds and lay-media outlets, showing over sixty thousand shares on Facebook alone within weeks of its publication. The Internet was bombarded with whispers of “proof” that we humans could not have evolved in the way we have been told by science.

The article was, however, riddled with lies. Let us take a quick look at only a short list of untruthful declarations that the public was victim to.

Source: The inside sources quoted were a Mr. James Churward and Mr. Hans Guttenberg, “spokesman” and “director” of the “American Institute of Alternative Archeology” (AIAA). Both these men, and the institute they belong to, are completely fictitious. They do not exist. Effectively, these men and their organization were chosen from thin air to pack a punch of authority upon the article.

Dating: Any and all dates associated with the Supreme Court ruling are entirely ambiguous, as the article only states that the classified documents were from the “early 1900s.” This presents an issue, since “classified documents” also did not exist heavily during this time. The very first classified documents, according to our Central Intelligence Agency: 1) detail invisible ink writing techniques used by the Germans during WWI; 2) are dated to 1917–1918; and 3) are “the only remaining classified documents from the World War I era.”[ii]

Removing the ambiguity from the equation and assuming these bones documents might have been slightly later than the “early 1900s” still delivers us to assume rationally that while the classification system was still in its infancy, the Smithsonian museum bones would have been small beans to the powers that be whose responsibility it was to conceal issues of national security during a wartime era. It was only because of the war that our nation began to utilize classification, and it wasn’t for another several decades that matters such as these claims of hidden/destroyed bones would have been “classified” to begin with.

Public record: Anything the Supreme Court rules on would be made a matter of public record. If the AIAA (that organization that doesn’t exist) had truly pressured the Smithsonian to come clean on their cover-up—if the Smithsonian really did converge in a messy legal battle over defamation that ended when the Supreme Court got involved and ruled that the Smithsonian release their classified documents—then this obscure World News Daily Report would certainly not be the only media company carrying the headline. A matter of such importance to the scientific community as the complete and public overhaul of evolutionary science would have been on the news all over the world. As it stands, verification of these referenced documents, and any court proceedings involving this case, cannot be found in any archive anywhere, governmental or otherwise.

Image: The photo of the femur bone “uncovered in Ohio in 2011 by the American Institute for Alternative Archeology” was 1) taken in Turkey, not Ohio, and 2) photographed in the 1990s, not 2011. The photo has been passed and shared around the Internet as early as 2008.

Disclaimer: For those of you who may wish to believe that the article is filled with truth, but that the website’s editor merely did a poor job of outlining the story and linking to the correct course channels, the site’s disclaimer is the final nail in the coffin:

Information contained in this World News Daily Report website is for information and entertainment purposes only.…

This website may include incomplete information, inaccuracies or typographical errors.…

WNDR shall not be responsible for any incorrect or inaccurate information, whether caused by website users or by any of the equipment or programming associated with or utilized in this website or by any technical or human error which may occur.

WNDR assumes however all responsibility for the satirical nature of its articles and for the fictional nature of their content. All characters appearing in the articles in this website—even those based on real people—are entirely fictional and any resemblance between them and any persons, living, dead, or undead is purely a miracle.[iii]

That pretty much sums it up. Anything even remotely resembling truth on their website is, by their own admission, “purely a miracle.” This final tone of sarcasm on their part is not lost on the readers who seek real truth in a world where a completely falsified article can be memed and shared over social network sites and lay-media coverage over sixty thousand times within weeks just because a bored online blogger gets a kick out of weaving tall tales.

Articles like this one from the WNDR are capable of bringing about international attention, but unfortunately, they are also capable of initiating a great wave of skepticism and dismissal over a subject that does hold truth. Regardless of how many people instantly jumped at the bit to be sure everyone on their news feed heard about the Smithsonian cover-up of giant human bones, when the source of such material is corrupt, it only renders a greater public disregard for any facts that can be proven on the subject. And when the true facts are later represented, those who were jaded by the first wave of lies aren’t interested in being duped again, so they ignore the evidence, assuming everything is erroneous even when it can be proven true. Real archaeological investigations delivering astronomically large bones inspire reactions such as, “Oh, yeah, I heard about that ‘giant bones’ deal. It’s all a scam.”

This tragedy becomes far worse when other media sites pick up on the headline and repost or rewrite a similar report that links back to the first (which has happened hundreds of times, in this case). It merely becomes mounting evidence that the entire story—and all the claims therein—are based on the product of wild imaginations. Ultimately, what World News Daily Report has done by blasting “entertainment” (their words) to the nation is a great disservice to those in the historical and scientific fields who have made it their lives’ work to expose what the Smithsonian really may have hidden away.

I do not intend to waste any time with irrelevant “shame on you” diatribes against a site whose staff may not have any clue as to the injury they have heaped upon real discovery and investigation, as that is not the purpose of this feature. However, no case study on such an issue as this could be considered complete without the unbiased disclosure of fabricated and insincere reports—and the damage those falsehoods lend to a more serious society of people who seek truth in a day when quick-share impulses launch colossal impairment upon accuracy—alongside what is faithfully factual.

Furthermore, this is not the only source of misinformation on the topic of giant human bones and the involvement the Smithsonian allegedly had in concealing the evidence. Many, many other books and articles have assisted in the public’s rejection of the facts through errant reporting, and innumerable photo-shopped images have surfaced depicting dig sites with human skulls the size of school buses (and here, too, once people are informed the images are faked, they turn to immediate disbelief of any information that is real). An entire book could be written that responds to and debunks these lies, but, again, that is not the purpose of this series of articles. Perhaps, then, the best place to turn our focus next will be the actual reports and official Smithsonian receipts and records that most of the world doesn’t know about. We do that and a whole lot more in the upcoming book, Unearthing the Lost World of the Cloudeaters and the groundbreaking documentary, There Were Giants, as you will discover in the weeks ahead.

NEXT UP: AUTHENTIC SMITHSONIAN SECRETS REALLY ARE GIANT

STARTING THIS WEEK SKYWATCH INVESTIGATION UNEARTHS THE LOST WORLD OF THE CLOUDEATERS! PREORDER TO RECEIVE $175.00 IN FREE BOOKS PLUS THE ALL-NEW “SHADOW HAND” COLLECTION! 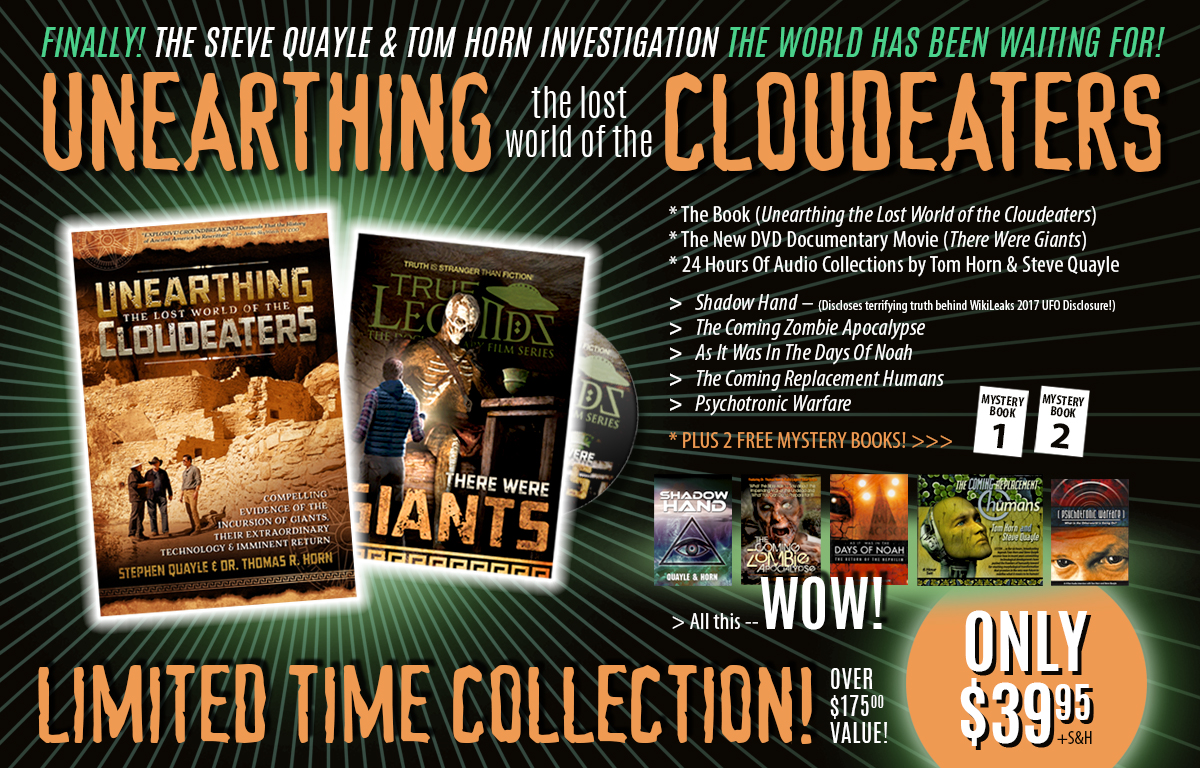 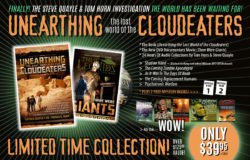 STARTING THIS WEEK SKYWATCH INVESTIGATION UNEARTHS THE LOST WORLD OF THE CLOUDEATERS! PREORDER TO RECEIVE $175.00 IN FREE BOOKS PLUS THE ALL-NEW “SHADOW HAND” COLLECTION!