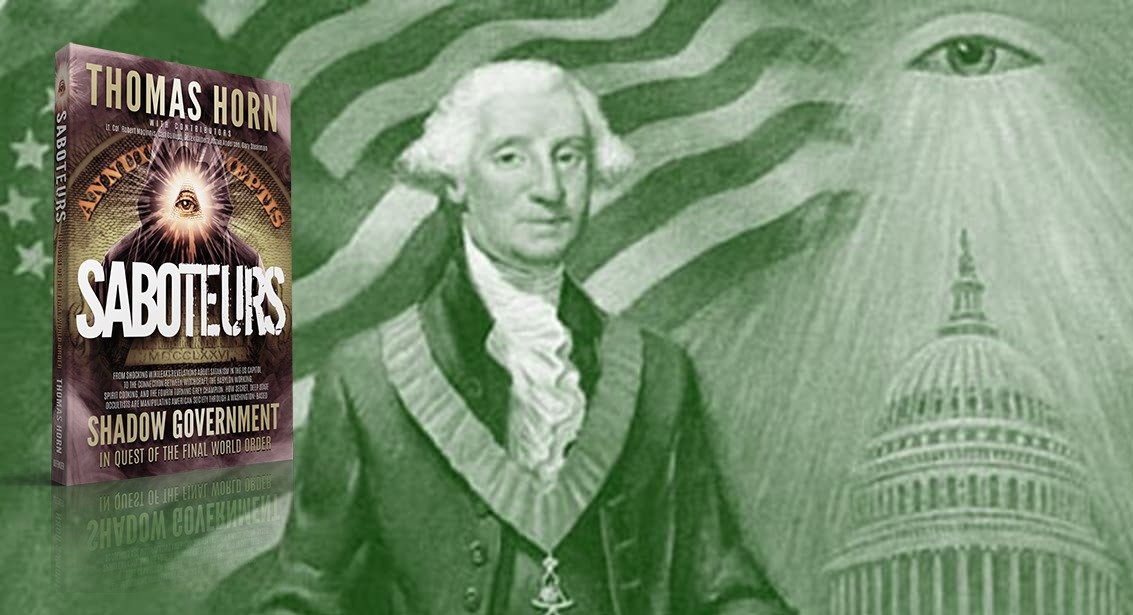 Again and again, we see the pattern of Freemasons “reclothing,” “distorting,” “warping,” “inverting,” and “hijacking” symbols to make them appear as one thing to the general public but point to that “peculiar and particular purpose” behind the veil. In this particular instance, to the early settlers of the newly born United States of America, the all-seeing eye of the Holy Trinity was placed above the Great Pyramid to “warp” it into the all-seeing eye of the unholy trinity: Isis, Osiris, and Horus. One might now wonder: “Why the Great Pyramid specifically?”

Hall had this to say about the Great Pyramid and its link to the Baconian “New Atlantis” (translation: New World Order) dream:

The Pyramid of Gizah was believed by the ancient Egyptians to be the shrine tomb of the god Hermes, or Thot, the personification of Universal Wisdom.

No trace has ever been found of the cap of the great pyramid. A flat platform about thirty feet square gives no indication that this part of the structure was ever otherwise finished; and this is appropriate, as the Pyramid represents human society itself, imperfect and incomplete. The structure’s ascending converging angles and faces represent the common aspiration of humankind; above floats the symbol of the esoteric orders, the radiant triangle with its all-seeing eye.…

There is a legend that in the lost Atlantis stood a great university in which originated most of the arts and sciences of the present race. The University was in the form of an immense pyramid with many galleries and corridors, and on the top was an observatory for the study of the stars. This temple to the sciences in the old Atlantis is shadowed forth in the seal of the new Atlantis. Was it the society of the unknown philosophers who scaled the new nation with the eternal emblems, that all the nations might know the purpose for which the new country had been founded?…

The combination of the Phoenix, the pyramid, and the all-seeing eye is more than chance or coincidence. There is nothing about the early struggles of the colonists to suggest such a selection to farmers, shopkeepers, and country gentlemen. There is only one possible origin for these symbols, and that is the secret societies which came to this country 150 years before the Revolutionary War. Most of the patriots who achieved American independence belonged to these societies, and derived their inspiration, courage, and high purpose from the ancient teaching. There can be no question that the great seal was directly inspired by these orders of the human Quest, and that it set forth the purpose for this nation as that purpose was seen and known to the Founding Fathers.

The monogram of the new Atlantis reveals this continent as set apart for the accomplishment of the great work—here is to arise the pyramid of human aspiration, the school of the secret sciences.[i]

Hall didn’t limit his reflections of the Great Pyramid in this one work. In his Secret Teachings of all Ages, he took it a step farther, explaining that all:

…the Seven Wonders of the World, while apparently designed for divers reasons, were really monuments erected to perpetuate the arcana of the Mysteries. They were symbolic structures, placed in peculiar spots, and the real purpose of their erection can be sensed only by the initiated.… The Seven Wonders of the World were built by Widow’s sons in honor of the seven planetary genii. Their secret symbolism is identical with that of the seven seals of Revelation and the seven churches of Asia.[ii]

He goes on to say of the Great Pyramid particularly, “The Great Pyramid was supreme among the temples of the Mysteries.… It was the tomb of Osiris, and was believed to have been built by the gods themselves, and the architect may have been the immortal Hermes. It is the monument of Mercury, the messenger of the gods, and the universal symbol of wisdom and letters.”[iii] Earlier on in this same work, he explains:

Through the mystic passageways and chambers of the Great Pyramid passed the illumined of antiquity. They entered its portals as men; they came forth as gods. It was the place of the “second birth,” the “womb of the Mysteries.”[iv]

Rhodes Scholar James H. Billington and Harvard Professor Charles Eliot Norton also recognized the occult symbolism of the Great Seal, saying that it “hardly” represented our country in any way other than an “emblem of a Masonic fraternity.”[v] 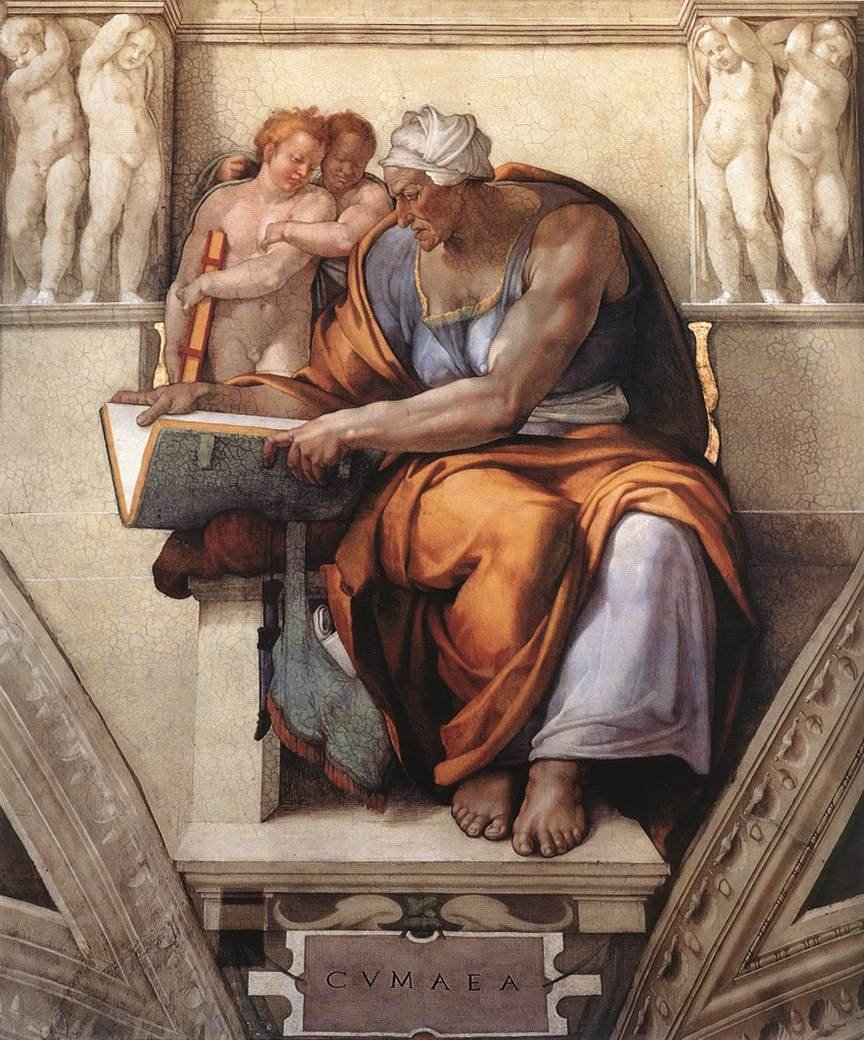 Ask yourself why the Vatican has the Cumaen Sibyl (the god Apollo’s most famous seer whose prophecy predicts his arrival at the end times as the leader of the new Golden Age (Novus Ordo Seclorum), which commences with the dawn of the final world empire) prominently displayed alongside Old Testament prophets inside the Sistine Chapel in Rome? Both the Apostle Paul and Apostle John warn that Antichrist will be the incarnation of the spirit of Apollo!

For Annuit coeptis, Charles Thompson, designer of the Great Seal’s final version, condensed line 625 of book IX of Virgil’s Aeneid, which reads, Juppiter omnipotes, audacibus annue coeptis (“All-powerful Jupiter favors [the] daring undertakings”), to Annuit coeptis (“He approves [our] undertakings”). The phrase Novus ordo seclorum (“a new order of the ages”) was adapted in 1782 from inspiration Thompson found in a prophetic line in Virgil’s Eclogue IV: Magnus ab integro seclorum nascitur ordo (Virgil’s Eclogue IV, line 5), the interpretation of the original Latin being, “And the majestic roll of circling centuries begins anew.” This phrase is from the Cumaean Sibyl (a pagan prophetess of Apollo, identified in the Bible as a demonic deceiver) and involves the future birth of a divine son, spawned of “a new breed of men sent down from heaven” when he receives “the life of gods, and sees Heroes with gods commingling.”

The meaning of all three Latin phrases from both sides together, once the imageries are all compared to Freemasonic agenda, could read:

But the trail goes even deeper than this.

Returning to what 33rd-Degree Freemason James David Carter wrote in 1864, we read of this reverse-side symbolism and numerology:

On the reverse, is the All Seeing Eye within a triangle surrounded by a golden glory. Besides the obvious Masonic significance of this design, it has a cabalistic value of seventy plus three plus two hundred, equaling two hundred and seventy-three which is the value of the phrase ehben mosu habonim (the stone which the builders refused) familiar to all Royal Arch Masons. It is also the value of the Hebrew proper noun Hiram Abiff, the architect of Solomon’s Temple and the principal character of the legend used in the Master Mason degree.… The triangle also represents the capstone of the unfinished pyramid and reminds the Mason of the immortality of the soul and that in eternity he will complete the capstone of his earthly labors according to the designs on the trestle-board of the Supreme Architect of the Universe. The unfinished pyramid cannot fail to remind him of the unfinished condition of the Temple when tragedy struck down its Masters architect.

The blaze of glory found on either side of the Great Seal cannot fail to remind the Mason of the Great Light in Masonry which is the rule and guide to faith and practice and without which no Masonic lodge can exist. It reminds him that only more light can dispel the pall of ignorance in which he stumbles until he enters tile Celestial Lodge where all light is given.[vi]

Again, many believe that the “New World Order” occult links in the Great Seal (as well as capital city monuments and architecture) is all just part of a conspiracy theory. But even spokespersons of the Freemasonic Order itself are coming forward to openly admit there’s more “plan” than there is “art” behind these designs. If we are to allow the repetitious symbolism to speak for itself, we arrive at this conclusion. When we allow the historically venerated Freemasons to speak for themselves, we again arrive at this conclusion. Where is the “hidden conspiracy” amidst all this proof? Can we even suggest that anything is even “hidden” by this point? It seems altogether quite transparently barefaced.

But why all these instances of thirteen? Did the designers of the Seal really want to give that much attention to the thirteen original colonies? Once or twice is understandable, but consider a bullet list of how many times this number appears on both sides:

A rudimentary search provides a lengthy list of superstitious connections to thirteen, many of which eventually trace back to the occult (if one is willing to dig that far back). Such a fear of this number exists that there is an actual, clinical phobia related to it. Triskaidekaphobia is derived from the Greek words tris, kai, deka, and phobos, translating literally to “three and ten morbid fear,” or “a morbid fear of three plus ten.” The following are only a few interesting connections to thirteen: 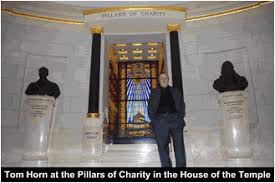 And the list goes on (including another unfinished pyramid with 13 steps at the House of the Temple where I met with leaders of the Scottish Rite Freemasonry during this investigation). For some strange reason, a lot of people fear the number thirteen. It also, however, plays an interesting role in a few numbers games. Just as quick examples: the simplest alphanumeric conversion table assigns a number to each letter from 1 to 26 (A=1, B=2, C=3, and so on). Some have pointed out that the values of USA (numbers 21, 19, and 1) can easily be toyed with to equate 13 (2 x 1 = 2 + 1 = 3 + 9 = 12 + 1 = 13). Another is AOL (America Online), whose logo appears to be the eye of Horus/Osiris in a pyramid (numbers 1, 15, and 12), and people are quick to point out that equation of 13 as well (1 + 15 = 16 – 1 = 15 – 2 = 13). Most of this just seems silly (as superstitions often do), but there is even still more to consider. For instance, the Illuminati (a radical, internal sect of Freemasonry) has thirteen top “satanic bloodlines”: Astor, Bundy, Collins, DuPont, Freeman, Kennedy, Li, Onassis, Reynolds, Rockefeller, Rothschild, Russell, and Van Duyn.

But according to esotericists like Hall, the extraordinary truth about the number thirteen so affixed to the Great Seal was a marker for those who understood it as a Masonic “power number,” sacred to the moon and representative of the head of Isis, as well as the number of Osiris’ remaining body parts Isis recovered along the Nile River (fourteen total; the male reproductive organ was never found, equaling thirteen). This is, of course, not even taking into consideration what numerology Bible scholars might reveal.

But perhaps the most intriguing connection to the number is what Ethelbert W. Bullinger disclosed in his book, Number in Scripture:

As to the significance of thirteen, all are aware that it has come down to us as a number of ill-omen. Many superstitions cluster around it, and various explanations are current concerning them.

Unfortunately, those who go backwards to find a reason seldom go back far enough. The popular explanations do not, so far as we are aware, go further back than the Apostles. But we must go back to the first occurrence of the number thirteen in order to discover the key to its significance. It occurs first in Genesis 14:4, where we read “Twelve years they served Chedorlaomer, and the thirteenth year they REBELLED.”

Hence every occurrence of the number thirteen, and likewise of every multiple of it, stamps that with which it stands in connection with rebellion, apostasy, defection, corruption, disintegration, revolution, or some kindred idea.[vii]

Perhaps even more interesting than everything discussed about the Great Seal so far, however, are the true colors that began to show in the 1930s and ’40s when it was decided the Seal would be placed on the dollar bill… and in the next entry the most guarded SECRET of the “Guru Letters and Great Seal Prophecies” will finally be exposed!