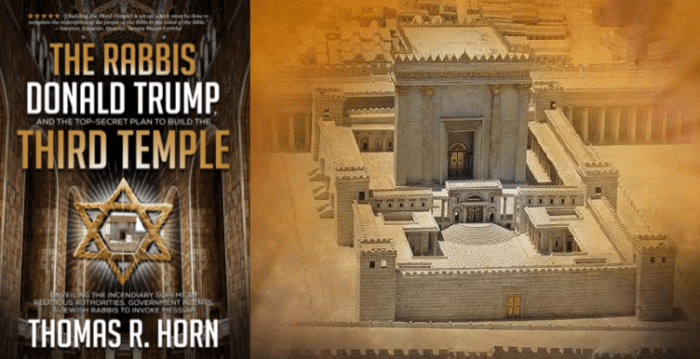 PART TWO: The Game Is Afoot!

Since the 1980s, the Temple Movement has been steadily working in earnest to gather and prepare the critical elements and to even train the priesthood that will serve in the new religious complex seated in Jerusalem. The importance of these efforts throughout parts of the Orthodox Jewish community and machinations of global political interests will become clearer as we reveal the Temple’s role in what rabbis believe has already started—the first stage of the messianic process (Moshiach Ben Yosef, or “Messiah from the house of Joseph”), which is described as the practical and social precursor to the second stage of the Messiah’s appearing as Moshiach Ben David (“Messiah from the house of David”) that includes reinstitution of Temple services for the third and final sanctuary under a Davidic dynasty.

But, you may say, the Muslim Dome sits atop the Temple Mount over the very (ancient) spot, some believe, where Jehovah’s Holy of Holies existed, and thus a Jewish Temple cannot be built, as it would start a world war if anybody tried to remove and replace the Al Aqsa Mosque, which rests on the far southern side of the Mount, facing Mecca, and/or the Dome of the Rock that currently sits in the middle where the Jews’ Holy Temple previously stood.

And yet, there are ways this substantial hurdle may soon be overcome.

For instance, a fault line near Jerusalem has been the cause of a half dozen major earthquakes over the last thousand years and may be strategically located to destroy the Islamic shrines at any point in time. Zechariah 14:3–4 reads:

Then the Lord will go out and fight against those nations, as he fights in the day of battle.

Such a catastrophic event could wipe out the Muslim compound and provide a catalyst for rebuilding Solomon’s Temple (or a version of it as a global center for all faiths) under international (perhaps even United Nations) efforts. Recent quake activity throughout the Holy Land (some thirty tremors have shaken Israel recently)[i] indicates that seismic activity could be building toward a prophetic eventuality. Reports in recent years have also featured scientific evidence and geological surveys warning that buildings in the Temple Mount area could be severely damaged if not demolished by an earthquake. The Associated Press, in what sounded particularly prophetic, reported, “Most at risk…is the Old City and the eleven-acre elevated plaza housing two major mosques, including the gold-capped Dome of the Rock. The site is known to Muslims as the Al Aqsa Mosque compound and to Jews as the Temple Mount—once home to the biblical Temples.”[ii]

It is also entirely possible that an event such as an earthquake would not be required to bring about the dream of a new Temple in Jerusalem. The Middle East is a powder keg, and war with its

missiles and bombs could take out the Islamic shrines in a single hour. Some claim the Muslim structures could even be intentionally targeted during a conflict as a way of facilitating the construction of a new Temple. Interestingly, the newest Mission: Impossible movie (Fallout) depicts a renegade arms dealer named John Lark who works with a global gang of thugs called “The Apostles” who possess three containers of plutonium, which they plan to use to fulfill the very scenario first outlined in my best-selling books Petrus Romans and The Final Roman Emperor by bombing the Vatican, the Temple Mount in Jerusalem, and Mecca. In a recent Jerusalem Post article, Palestinian President Mahmoud Abbas charged that Israel is secretly planning to make that happen “to destroy the Al-Aqsa Mosque in order to rebuild the Third Temple.”[iii]

And then there is a third possibility involving how the Third Temple could be built. On June 18, 2009, it was announced in Jerusalem as a result of theological research that “a prophetic rabbi” could allow for an extension of the Temple Mount to be made, on which the third Jewish Temple could be constructed. In an article called “A New Vision for God’s Holy Mountain,” Ohr Margalit, rabbinical studies professor at Bar-Ilan University in Israel, wrote that “the scenario of a holy revelation given to an authentic prophet that the temple be rebuilt on the current or an extended Temple Mount in peaceful proximity to the Dome, Al Aqsa Mosque, and nearby Christian shrines” is all it would take to approve such a plan.

According to Jewish law…such a prophetic mandate would then be binding. It would also be in keeping with the words of the twelfth-century Jewish sage Maimonides that Christianity and Islam are part of God’s ultimate plan “to direct the entire world to worship God together.” Interestingly, Theodore Herzl, the preeminent secular Zionist, detailed the same vision for a rebuilt temple in peaceful proximity to Islamic and Christian shrines on what he called “the holy region of mankind.[iv]

As alluded in the bullet points in PART ONE of this series, due to the occult value or sacredness of the numerous elements surrounding Freemason versions of Solomon’s Temple (on which all Masonic lodges and ceremonial rituals are based), there has been an idea for some time that groups from among the Freemasons and illuminated fraternities intend to rebuild or to participate in the rebuilding of a glorious new Temple in Jerusalem fashioned after the one built by Solomon. Disclosure of this has occasionally reached the public’s ear. The Illustrated London News, August 28, 1909, ran a spectacular supplement detailing this goal. The article was titled, “The Freemason’s Plan to Rebuild Solomon’s Temple at Jerusalem.” Three years later, September 22, 1912, the New York Times published an outline by Freemasons to rebuild the Temple under the title, “Solomon’s Temple: Scheme of Freemasons and Opinions of Jews on Rebuilding.” By 1914, some publishers had begun adding unprecedented details, including a report that the land on which the Dome of the Rock now stands was secretly purchased and plans were already under design for the construction of the third and final Temple. Researchers since have produced intelligence that a hushed collaboration is firmly in place, held back only against the right time, opportunity, and circumstances when exalted Freemasons and their associates will move with haste to reconstruct a new Temple, and then their messiah will pass through the golden Masonic portals of the Temple, announcing to the world that the universal savior of mankind has come (Apollo incarnate to them). 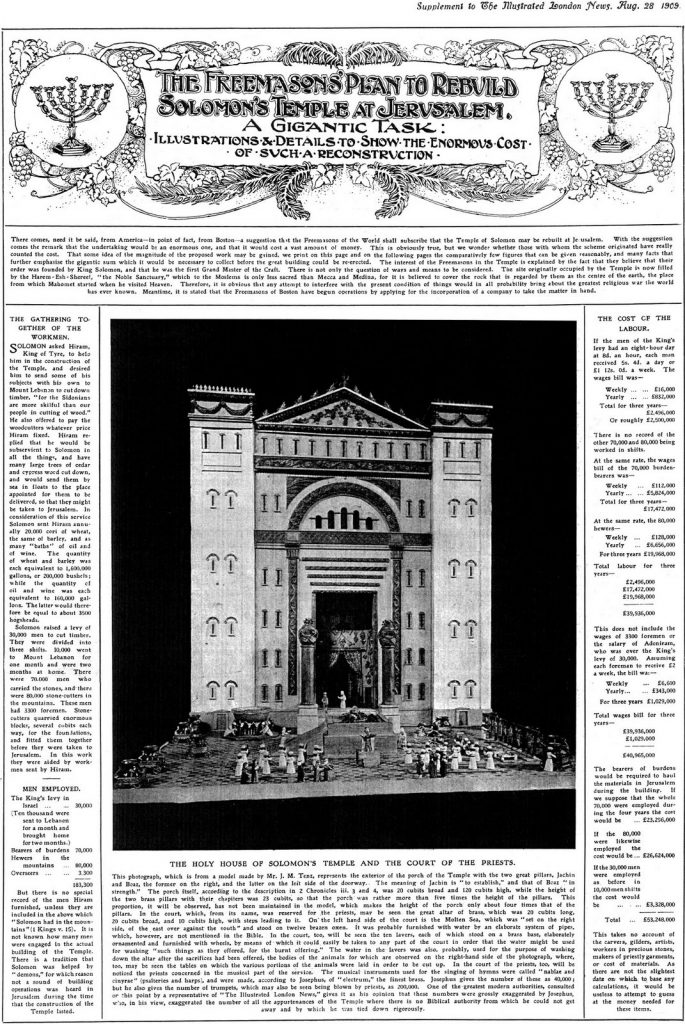 Image of the Illustrated London News, August 28, 1909, ‘The Freemason’s Plan to Rebuild Solomon’s Temple at Jerusalem

In addition to occultists, devout groups including the Temple Mount Faithful and the Temple Institute in Jerusalem are busy restoring and constructing the sacred vessels and vestments that will be used for service in the new Temple at the arrival of Messiah (see http://www.templeinstitute.org). While not all Evangelicals agree, some dispensationalist students of prophecy recognize the importance of such plans as signaling the coming of Antichrist and view Old and New Testament Scriptures as explaining that a false Jewish messiah will appear, enthroning himself as God in the Temple in Jerusalem, but afterward, he will defile the holy place by setting up a sacrilegious object—perhaps an image of himself—in the Temple and ordering the sacrifices and offerings to cease (see Daniel 9:27; 2 Thessalonians 2:3–4). For any of this to occur, it is necessary for the Temple to be rebuilt, thus making claims by Freemasons or other groups interested in fulfilling this monumental task interesting in light of unfolding end-times events. 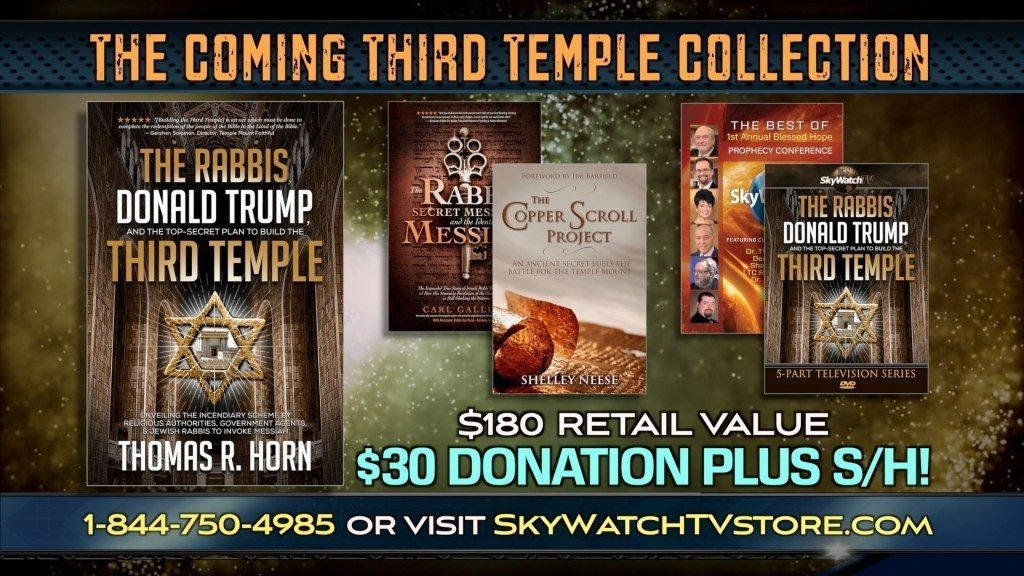 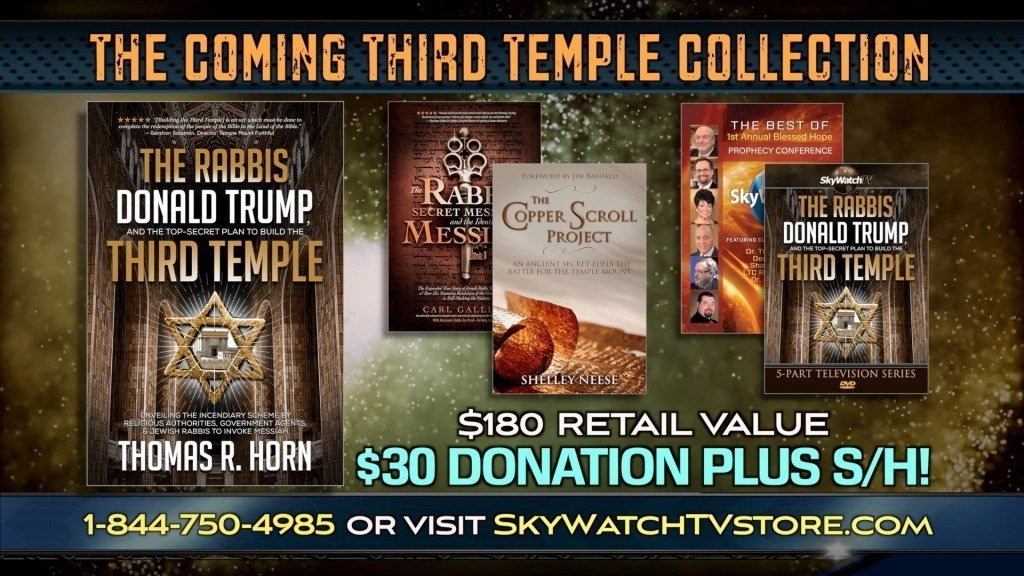