On special occasions typically in September SkyWatch TV features preparedness broadcasts with experts from around the world covering a broad base of issues from finance to surviving off-grid. A major reason for this involves what looks like the fulfillment of prophecy everywhere; unrest in the Middle East, the alignment of Gog and Magog, instability within the global economic system, threats to the national grid, terrorism and even gateways through biotechnology that could unleash upon earth pestilence of biblical proportions. People from all three of the world’s great religions see these developments as potential omens of an ‘End Times’ scenario leading to the Apocalypse. Yet many believers in God, especially in America, remain indifferent to the need to prepare for the unexpected. What can they be thinking!?

An article by Mimi Hall in USA TODAY recently pointed out this phenomenon, saying, “Most Americans haven’t taken steps to prepare for a natural disaster, terrorist attack or other emergency, according to a new study on preparedness, and only about a third have made plans with family members about how they would communicate with each other during a crisis.”

Part of the reason for this may be that we are by comparison well off in the United States, and we trust in our bank accounts to sustain us. Unfortunately, money sitting in savings and investments are useless if you become stuck in a storm or other crisis.

Another disarming reason I witnessed during my 25 years of pastoring for why people of faith neglect preparedness has to do with an odd defeatism that says, “If current events are prophesied to happen, then there’s nothing we can do about it anyway.”

The notion that calamity is unavoidable if it is divinely predicted is even sanctioned by some expositors who miss the pattern for preparedness in the Bible. While it is true that famine was prophesied for Egypt, it is also a fact that God led Joseph to prepare for it, and, as a result, he saved his family and the nations around about.

Proverbs 22:3 tells us that a prudent person will foresee such difficulties and prepare for them, while a simpleton will go blindly on and suffer the consequences. This is good advice not only for religious folks, but also people of any persuasion.

A third and perhaps the greatest reason why some people, including religious people never plan for disaster, is that they view the need to prepare for the unexpected as too complicated and costly. They imagine the back yard being dug up for construction of a massive bomb shelter and the basement crammed with row after row of dry grains and large containers filled with backup water.

The truth is, survival preparation is modestly affordable. Under most circumstances, the ability for individuals to remain mobile for a few days to a week or so by simply grabbing an inexpensive “survival bag” and heading out is more important than silos filled with long term storage foods.

Even when we envision a worse-case scenario – such as a terrorist nuke or ICBM exchange – low-cost shelters, that can be built at home and combined with a minimal amount of Potassium Iodide, would help keep as much as 99 percent of the population alive according to one synopsis by the Department of Homeland Security.

While having to try to endure radioactive fallout is a growing possibility, the fact is that most people are more likely to face disaster as a result of things like nature. Not long ago a journalist became lost in a snowstorm in Oregon and died from the exposure to freezing temperatures. If his car had been equipped with a survival kit, he would have had an excellent chance of survival.

During Hurricane Katrina, one woman had an emergency supplies kit in her attic that kept her and her two cats alive for days until help arrived. Another man, a doctor who had read a preparedness book and followed its instructions, was prepared with equipment and supplies. His house became a gathering place for people displaced by the storm.

For reasons such as these, my wife and I recently provided each of our children with a “walk out” kit for the trunks of their cars. These emergency bags contain enough food, water, shelter, first aid, lighting and communication supplies to keep them alive for days in the case of a vehicle malfunction or other situation where they would need to abandon their car.

Many of the items vital for a good survival kit can be found at your local shopping center: an inexpensive poncho, a basic first aid assortment, nylon cord, canvas for temporary shelter, duck tape, a whistle. Other items are a bit trickier to find and may need to be acquired from one of many online emergency preparedness companies. These include multi-year-shelf-life foods, multi-year-shelf-life water boxes or pouches, paper-thin thermal blankets designed by NASA to retain body heat, special hand-crank combination flashlights with radios and emergency signals built in, and so on. My personal favorite is the “Midland ER310” which requires no maintenance, no batteries, no bulb replacements, and can even power your cell phone. I also highly recommend having at least one military grade gas mask on hand.

Pre-made emergency kits containing items such as those above can be acquired online at costs from $30.00 and up, depending on the number of people and the number of days they are designed to sustain. Why then, given how affordable disaster preparedness is, are so many people unprepared for an emergency?

Within “faith communities,” part of the problem goes back to western dispensational fatalism that fails to see God’s instructions about the future and the responsibility He gives concerning preparation. Church authorities may speak of the hidden shelter that God provides His followers during a storm, yet often fail to see the believer’s responsibility cast throughout the Bible where we are to care for our families and communities by readying for the unknown.

Some teachers also erroneously believe that emergency preparedness reflects a lack of faith in God.

The opposite is true. The Book of James measures faith by personal action, and Hebrews 11:7 describes true faith this way: “By faith Noah, being warned of God of things not seen as yet, moved with fear and prepared an ark to the saving of his house.”

God told Noah that He would destroy the earth by a flood. He gave Noah instructions on how to be prepared so that he and his family could survive. Noah didn’t know when the flood would come, only that it was prophesied, and he prepared for it. When the Flood arrived, he was ready. His faith in and obedience to God’s word, his survival instincts, and ultimately his preparedness actions saved his family and preserved the human race.

The parallel between Noah and today is astounding. “As it was in the days of Noah,” says Luke 17:26-27 concerning the last days. Noah’s actions should define the modern believer’s responsibility, including the need for spiritual and physical preparedness. Of course, there are other places in the Bible that provide lessons about preparedness, including principles in the Books of Psalms and Proverbs, the parable of the faithful and evil servants (Matthew 24:45-51) and the parable of the ten virgins (Matthew 25:1-13). But 1 Timothy 5:8 goes even further, saying that a person who does not provide for the survival of their relatives has denied the faith and is worse than an unbeliever.

Given these instructions and the belief held by many today that we are living in “the last days” or at a minimum a time of unusual earth changes, leaders of religious institutions urgently need to educate their followers about taking personal responsibility for preparedness in an age of growing uncertainty. Dramatic lessons over the last few years have proven that we cannot depend on government agencies such as FEMA to save us if we need them. In fact, a report last month found that five years after the Sept. 11 terror attacks, the government still isn’t fully prepared to respond to a major public health emergency such as bioterrorism or a pandemic flu outbreak.

So, what can one do to help people with disaster preparedness? This is the good news. Hundreds of pages from reports and booklets on how to perform first aid, prepare temporary shelters, build bomb shelters, defend against terrorism and chemical contamination, shield against nuclear fallout, survive earthquakes, storms, floods, and dozens of other emergency situations are available at places like SkyWatchTVStore.com.

Spiritual leaders can obtain such works and place them on a table in a church foyer, hand them to neighbors, give them out during classes, or better yet teach a class on preparedness and tie it in with the mandates of Scripture. If nothing else, everybody can forward this article to the people they know with a recommendation that they do what is right to protect themselves as well as those God has placed under their care.

As a veteran of more than 40 years of church ministry, I call on pastors and other religious leaders to stand at the forefront of this issue and to make disaster preparedness some part of their ministry. This doesn’t need to define what you or your fellowship are about, but this can and must be part of the wise counsel you offer those you have responsibility for. You could literally save a believer’s life!

Together as people of faith, we should face the future with confidence and take the lead in disaster preparedness. Deuteronomy 30:19 says, “Today I have given you the choice between life and death, between blessings and curses. I call on heaven and earth to witness the choice you make. Oh, that you would choose life, that you and your descendants might live!” 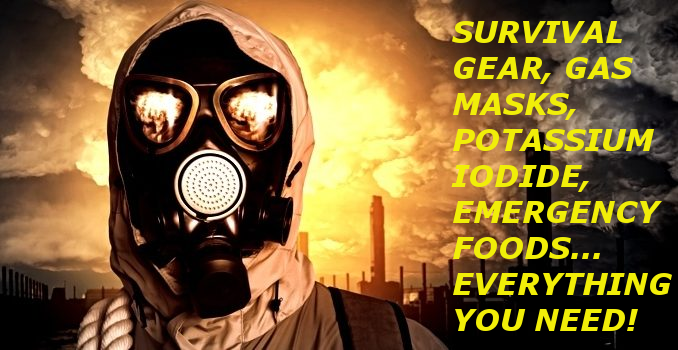