When the Constitution Hangs by a Thread, Will Mitt Romney at Mystical Age “72” Ride in on a White Horse? 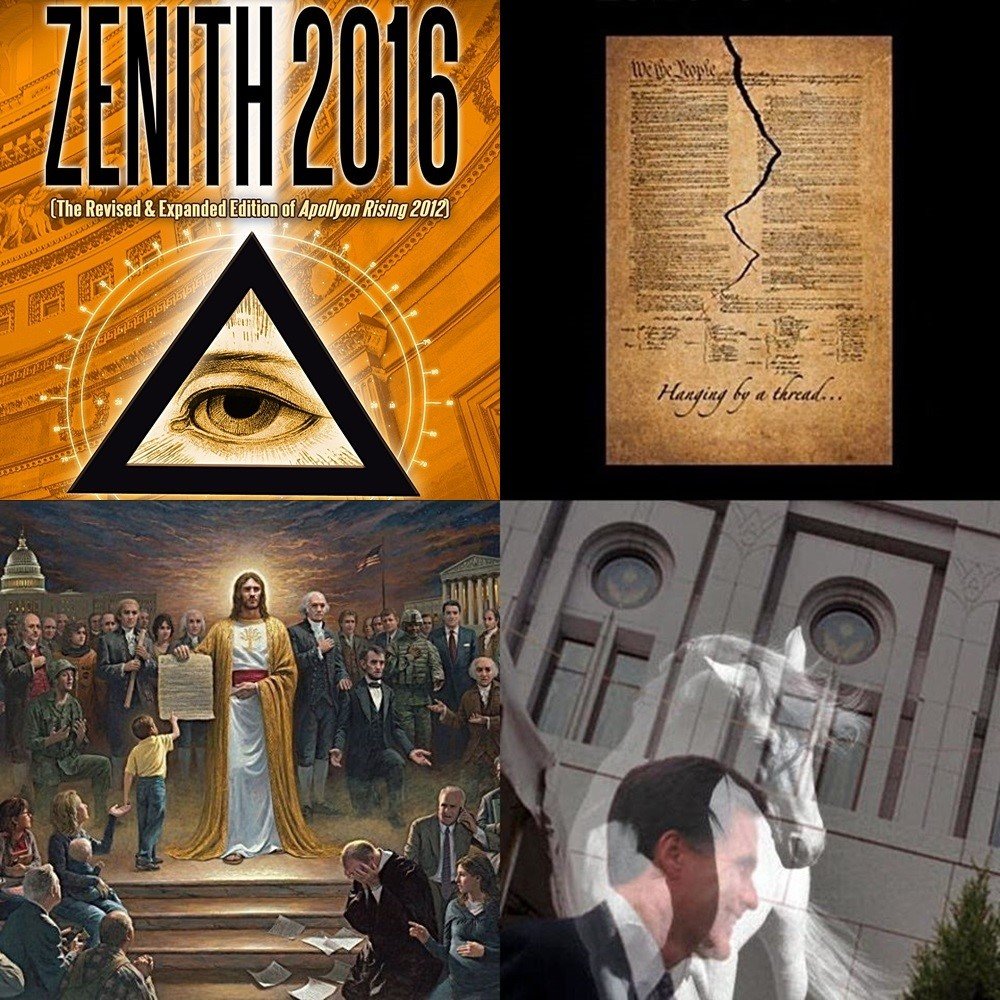 Mirroring the premise of the Fourth Turning is a controversial Mormon prophecy ascribed to Joseph Smith. The 1843 divination is called the “White Horse Prophecy” and is named after the White Horse of the book of Revelation. It predicts a time when the US Constitution will be in crisis only to be saved by a member of the LDS (Latter Day Saints, more commonly called “Mormons”).

According to history, after their expulsion from Missouri in 1838, the Mormon prophet Joseph Smith traveled to Washington, DC where he made an appeal to the national government for redress of wrongs suffered in that state. Judge Elias Higbee traveled with him and they were met by leading statesmen of the United States including “Henry Clay, John C. Calhoun, President Martin Van Buren, different members of the Cabinet, Senators, and Representatives.”[i] After hearing their grievances, Van Buren admitted their cause was just, but said that he could do nothing about it lest he lose the vote in Missouri. Smith found this outrageous, and uttered divine judgments against the United States Government. Mormon historian, Marvin S. Hill, wrote of this: “To secure legal sanction for his call to arms, Smith petitioned Congress to form Nauvoo [a small city established by early Mormons in Hancock County, Illinois, along a great bend in the Mississippi River] into a federal district and grant him authority to command federal troops in defense of the city. He warned his closest friends [in the Nauvoo City Council] that ‘if Congress will not hear our petition and grant us protection, they will be broken up as a government, and God shall damn them, and there shall be nothing left of them—not even a grease spot.’”[ii] Approximately four years later, Smith prophesied again, this time speaking of a day when the US Constitution would “hang by a thread” and would barely be “preserved and saved” by a rider of a White Horse or representative of the Mormon Church. The “White Horse Prophecy,” as it has come to be known, bares a dubious distinction because it was not given in public but rests mostly on the testimonies of two other Mormons—Edwin Rushton and Theodore Turley—who wrote it down as Smith delivered the prophecy at his home in May, 1843. The following year, Smith would run as an independent candidate against James Polk and Whig Henry Clay for the presidency of the United States. At that time he was advocating the overthrow of the US government and its replacement by a Mormon-led theocracy with himself as leader of “the army of God,” but his hopes were cut short when he and his brother Hyrum were attacked and killed by a mob. While the White Horse prophecy he gave (which, also of contemporary interest, states that “the two Popes, Greek and Catholic, will come together and be united”[iii]) is not considered undisputable by all Mormons, it has, at least in part, been repeatedly affirmed as genuine in general conference messages, including in October 1918, when the sixth LDS President, Joseph F. Smith, said, “Joseph Smith, the prophet…predicted that the time would come, when the Constitution of our country would hang as it were by a thread, and that the Latter-day Saints above all other people in the world would come to the rescue of that great and glorious palladium of our liberty.”[iv]

Other famous Mormons that have spoken in favor of the White Horse Prophecy include:

The list above goes on and on among various Mormons throughout history that have held the prophecy of a constitutional crisis and its salvation via a Mormon to be true. In more recent years, Utah Senator Orrin Hatch made an oblique reference to the prophecy during his year 2000 bid for the US presidency, saying, “I’ve never seen it worse than this, where the Constitution literally is hanging by a thread,”[x] and talk-show host, Glenn Beck, mentioned the “hang by a thread” portion of the White Horse Prophecy when he was on the Bill O’Reilly show on November 14, 2008.[xi]

This brings us to the present hour. The clock is ticking down toward the year [2020] when some expect a constitutional crisis to unfold right in time for a Mormon savior to appear on his white horse.[xii] Romney has already made his [displeasure with Donald Trump] public,[xiii] and he isn’t just any Mormon. He is the miracle baby of a woman who was told by her doctor she could never bear a fourth child. Born anyway in 1947, he became the star-child of George W. Romney, the most prominent Mormon in American politics (as governor of Michigan) and a seventh-generation direct descendant of Parley Parker Pratt, Sr., one of Mormonism’s founding twelve apostles. Named after the close family friend John Willard Marriott (one of the richest Mormons in history), Romney received his patriarchal blessing at nineteen years of age and was told by the Church that the Lord expected great things from him. Shortly thereafter, while helping his mother (Lenore Romney) in the 1970 campaign against Democrat Phillip A. Hart in the Michigan general election, “Mitt” Romney—as he was then being called and whose name can be made to equal 666—began hearing prophetic insinuations about his future role as a national leader. This included whispers among Mormons about the White Horse Prophecy, as author Sally Denton noted for Salon Magaine:

That same year [1970], the Cougar Club—the all male, all white social club at Brigham Young University in Salt Lake City (blacks were excluded from full membership in the Mormon church until 1978)—was humming with talk that its president, Mitt Romney, would become the first Mormon president of the United States. “If not Mitt, then who?” was the ubiquitous slogan within the elite organization. The pious world of BYU was expected to spawn the man who would lead the Mormons into the White House and fulfill the prophecies of the church’s founder, Joseph Smith Jr., which Romney has avidly sought to realize. (emphasis added)[xiv]

Though Romney has publicly sought to downplay the White Horse Prophecy whenever raised in media,[xv] he is aware that fellow students at BYU not only idolized him as the “alpha male” of their fraternity but commonly referred to him as “the One Mighty and Strong”—a direct line from the prophecy by Joseph Smith, Jr., the founder of the Latter Day Saints. This grandiose and prophetic title is taken from Isaiah 28:2, “The Lord hath a mighty and strong one, which as a tempest of hail and a destroying storm, as a flood of mighty waters overflowing, shall cast down to the earth with the hand.” Smith predicted this Mighty and Strong One would not only save the US Constitution but use his political office to bring about the “inheritances of the [Latter Day] Saints.” What that implies could be of significance for the future of the United States according to former candidate for Nevada governor and television newsman, Mike Moody.

As a young man, Moody was a personal friend of Romney and a member of the prestigious Cougar Club at Brigham Young University that held “Mitt” in such prophetic esteem. In his memoir, Mitt—Set Our People Free, he describes how the White Horse Prophecy motivated him personally “to seek a career in government and politics” because he believed that he and other Mormons were being divinely directed to expand the Mormon “kingdom” by helping Romney—whom he says is under a sacred blood-oath to the Mormon Church to actually replace the US Constitution—to advance the goal of a one-world government under Mormon paternalistic priesthoods and the “political Kingdom of God and Joseph Smith’s version of the Millennial Kingdom on Earth.”[xvi]

“We were taught that America is the Promised Land,” Moody told me on the phone, adding that, “the Mormons believe they are the Chosen People and that the time has come for a Mormon leader to usher in the second coming of Christ and a political Kingdom of God in Washington, DC.”[xvii]

After our discussion, Moody mailed me a copy of his book, Mitt—Set Our People Free, and I found it to be an intriguing and rare insight into Mormon theology and philosophy. I was already familiar with the LDS belief involving pre-mortal existence where they, as “spirit children,” existed in heaven and were sent by God to Earth to go through trials in bodies of flesh in order to be perfected like the Father. That is to say, following their time on this planet, worthy Mormons may also become gods and rule over their own worlds where they—just like the God of the Bible—can be served and worshipped throughout eternity by lesser humans (you and me) who fail to attain such divinity. What I had not realized, however, was the extent to which some Mormons—including those devoted to Mitt Romney—saw their place in the deity-building scheme unfolding within American politics. Early in his work, Moody reflects this creed when republishing personal correspondence between himself and the 2016 presidential hopeful. In his open letter to Romney, the former Mormon says:

At eighteen, my Patriarchal Blessing rattled through my brain like a coronation and a call to arms. Patriarch J. Harold Brinley laid his hands on my head in 1963 and told me I was a valiant, true son in the preexistence with important earthly responsibilities. He said when I raised my voice in defense of the truth [Mormonism] the Lord would magnify and enhance me in the eyes of my fellow men. The instructions in my blessing, which I believed came directly from Jesus, motivated me to seek a career in government and politics… My foreordained destiny had called me, and the words of my blessing swelled in my chest. I did my duty to the Mormon Gods and ran for Governor to expand our kingdom and help you [Romney] lead the world into the Millennium.”[xviii]

Whether it be Mitt Romney or another LDS member, the chances of a Mormon American President in [the future] is stronger than many think, as this religion—once widely held as a cult—is among the fastest growing in the world. What makes this prophetically interesting in light of the larger scope of this book and the occultist dream of a deified man in the role of a national leader (the second coming of Apollo), is how perfectly fitting Mormon theology balances with scriptural revelations concerning the arrival of the Antichrist. As with Joseph Smith’s prophecy, the Man of Sin will ride in on a white horse (Revelation 6:2), having preexisted before coming (again) in a body of flesh (Revelation 17:8). He will be a god-man, as Mormonism aspires to, and the embodiment of Jesus’ bad-boy “brother,” the Devil. Yes—despite the flack presidential candidate Mike Huckabee [speaking at the 2020 Branson Conference just ahead of the all-important presidential election] took in 2007[xix] for asking the question—members of the LDS do believe Jesus and Satan are brothers and you can read this for yourself on the LDS website in chapter three of their “Gospel Principles.” [xx] Mike Moody adds, “Mormons were taught as children that Lucifer is our big brother—the second born after Jesus—who presented God the Father with an earthly plan to force humanity into righteousness and mandatory salvation. [xxi] In response, Jesus countered with his plan of ‘free agency,’ which our Heavenly Father accepted for his spirit children over [the other son] Lucifer’s plan.” [xxii] Mormonism even provides for the posthuman technology known as ‘transhumanism’ that some believe is necessary to incarnate the Lord’s “brother” as the end times Man of Sin, and a Mormon Transhumanist Association [xxiii] exists to syncretize LDS religion with these goals.

[xvii] Michael Moody, in a personal phone conversation between he and Tom Horn, 2013.