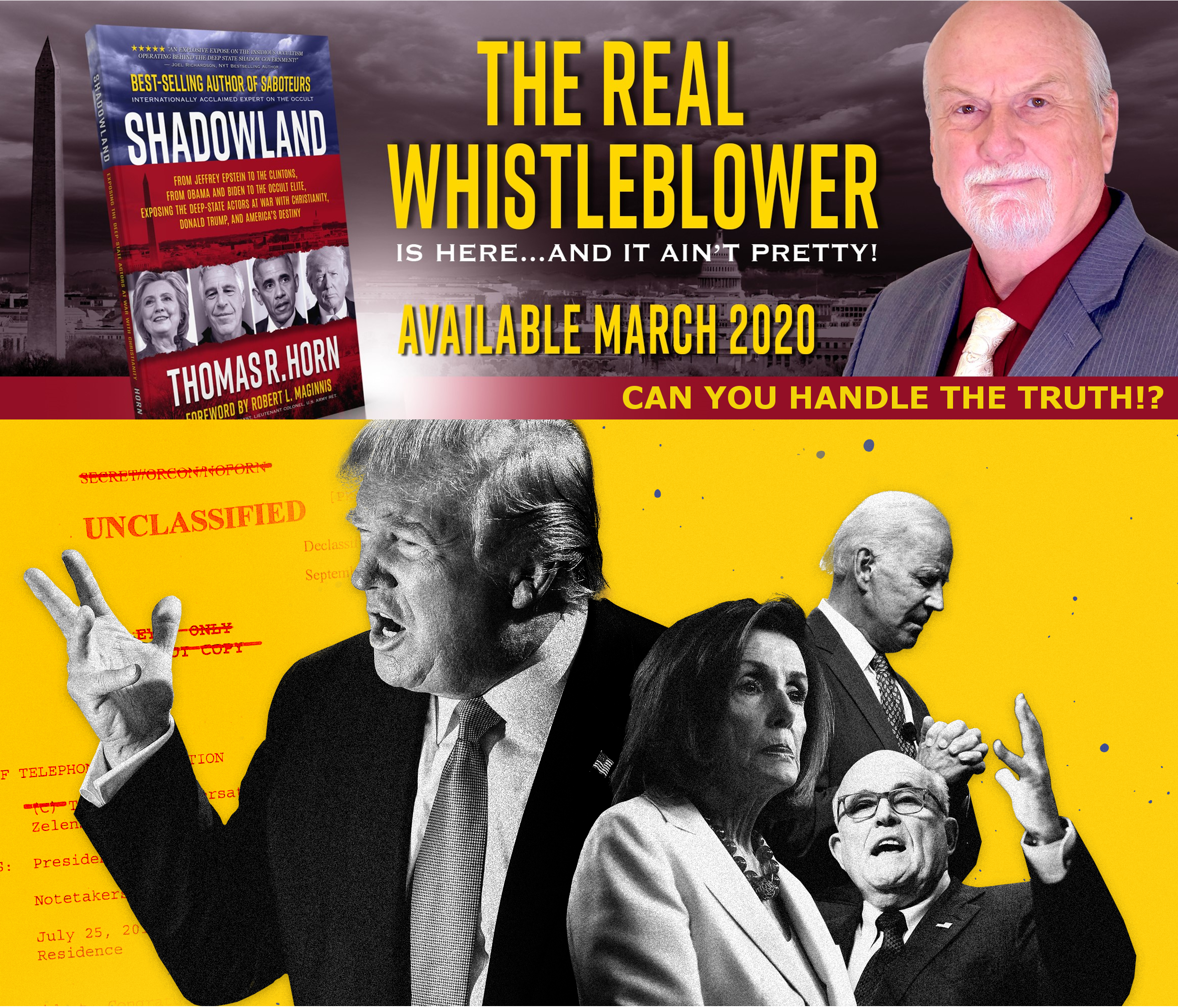 We are living in exciting and frightening times! It seems that not a day passes without a new national cultural or political scandal bubbling up from Washington’s evil swamp which gives most of us that queasy feeling the world is upside down.  This is especially true because the deep state and its progressive political cadre incessantly attack President Donald Trump while starry-eyed 2020 progressive presidential candidates promise nirvana and free everything to a post-Christian and gullible public which should know full well those are utterly empty promises.

Yes, many Americans are gullible, even some Christians to the siren call of progressives and vulnerable to the lies of the deep state cabal and their liberal media companions, the essence of what Tom Horn exposes in Shadowland (COMING IN MARCH). Tom helps open your eyes to the fact that many Americans have succumbed to a national pathos–taken captive by a host of occultic connections, true evil influencers–that could well destroy this country and make her irrelevant for the end times.

Shadowland exposes those occultic influences hidden especially within Washington’s deep state, our morally lost culture as well as thanks to the “leadership” of the progressive political movement which is determined to seize the reigns of America through their nefarious, evil ways. It is with this background that Tom Horn delves into high-profile lives and issues most writers genuinely fear to tread by calling out the rank evil that pervades many among our ruling elite and their nefarious, corrupt and morally debased shenanigans.

That’s why I’m both excited about Tom’s new work but also sobered, frankly frightened because if the current direction of America isn’t quickly reversed, all hope is lost.  Shadowland addresses true, although shocking accounts of real elites and actual tragic events we’ve all heard about in the nightly news which reflect just how far America has fallen, especially in the last couple decades. Tom provides us a new perspective on how this rampant evil could lead to America’s demise, a pleasing outcome for the world’s dark forces.

I trust Tom’s judgment on such critically important issues because I’ve come to know him. I met Tom in 2014, first telephonically and then in person as he agreed to publish my second book, Never Submit. I could tell from our initial meeting that Tom is a special, insightful, spiritually-aware, and wise man. I value his counsel and have learned much about his inspiring life story by sharing time with him over many meals, long car rides and just sitting around the kitchen table conversing about so many issues challenging America and especially the contemporary Christian.

Tom asked me to write the foreword to Shadowland because I’ve vicariously experienced much of what he so clearly addresses inside these pages. Shadowland is about the evil within our culture but especially inside the bubble of our nation’s capital city, Washington, DC. America’s Capital City on the surface (at least around the National Mall with its beautiful monuments) is captivating to the naked eye but beneath the charming surface it hides deep darkness, wickedness and it rests under an ever-present cloud of spiritual warfare.

Shadowland addresses so many of the issues directly associated with that ever-present dark cloud covering Washington, the place that has become my home for most of the past half century. For many years I’ve seen firsthand some of the things Tom writes about starting when I was a cadet at the United States Military Academy, West Point, New York when on breaks I would visit my mother who worked in the 1970s on Capitol Hill, in the White House, as the personal secretary to world famous psychic Jeanne Dixon, all before she married a wealthy Washington businessman. Through her tangled, insider web of Washington establishment friendships I met some true movers and shakers and saw firsthand the ugly underbelly of Washington’s evil, the elite and experienced the true deep state long before that became a household term.

Thirty years ago I returned to work full time in Washington’s wasteland of political and cultural intrigue thanks to the U.S. Army which assigned me to the Pentagon where I served as a member of the government’s largest bureaucracy. I ended that career serving on the Pentagon’s work group that wrote President Bill Clinton’s homosexual policy, Don’t Ask, Don’t Tell, which for me was a baptism under fire inside the rank evil of the deep state.

After retiring my Army uniform I joined the Family Research Council to work on contentious cultural and spiritually-charged issues, lobbied on Capitol Hill for Christian value-related legislation such as abortion and human rights, worked with many federal government agencies on issues like drug abuse and HIV/AIDS and spent considerable time engaged with the media as a broadcast analyst for Fox News and a columnist for Human Events. Today and for the past 17 years I’m back at the Pentagon very much imbedded in the Washington scene and experience the deep state every day inside the Capital’s bubble.

Those many years and experiences compelled me to write two books which Tom published, The Deeper State and Progressive Evil. Both books expose aspects of the unsavory reality of this modern era, America’s Sodom and Gomorrah-like culture and the pervasive spiritual warfare sparking the skies across this formerly great nation. Tom picks up where I left off with Shadowland to reveal some of the worst of that evil for our country and the head-on attacks on our nation’s rich Christian foundation.

Shadowland takes the reader on a wild ride, a trip only a few years ago that would be considered pure mythology. Unfortunately, now in 2020 Tom’s writing exposes the stark truth about the deep corruption across America, among some of the ruling elite, and explains how we’ve been duped by occultic-influencers, rank demonic forces. Yes, America has tumbled far from where our founders started this formerly great nation to a place we may never recover.

Much as Tom exposed in his past works like Saboteurs and Belly of the Beast, Shadowland unmasks the true nature and reason for America’s fall.  He guides the reader through the deep crevasses of the now infamous Russia hoax, the evil influence of fake news, progressives’ advancement of radical socialism, and the dark legacy of some high-profile narcissist elites. Shadowland will both intrigue you and keep you turning the pages wanting more.

Tom reminds us how we are momentarily enjoying a respite from the full impact of corruption perhaps just before the final downfall of America. He reviews recent history to remind us that President Trump, perhaps a modern Cyrus-like figure, came to the Oval Office promising much and his first term delivered on that promise. He campaigned for the presidency promising to return the power to the people by robbing the deep state of its ill-conceived influence while exasperating progressives and their seen and unseen allies and exposing cancerous corruption such as that of former Director James Comey at the Federal Bureau of Investigation and John Brenan, the former head of the Central Intelligence Agency. And he fought hard and successfully against the liberal media which spewed little more than lies via their incessant fake news. In spite of these challenges Mr. Trump rebuilt America’s economy and returned to America’s heartland many jobs robbed by the likes of the communist Chinese. He deserves our applause and another term in office but not if the shadowland agents of doom and gloom have their way.

Mr. Trump’s non-re-election in 2020 could well explode the progressive agenda on America unleashing all manner of evil for our country and the world. That’s a real danger and one every American voter must consider even if they disagree with some of the president’s idiosyncrasies.

You won’t regret investing your time reading Shadowland. It will open your eyes to the pervasive occult influences corrupting not just our federal government, Congress, the intelligence community, our media, and more broadly our culture. These radical influences are evident across this country from the police-attacking thugs in New York City to the progressive ruled, needle and feces-infested streets of the once beautiful streets of cities like San Francisco. Tom exposes the evil cabal’s tricks, their frightening manipulations and failed ideologies like socialism.

Shadowland comes onto the scene just as Americans voters begin to focus on the critical 2020 presidential election to decide which road to take into the future. It’s an open-eyed primer to help especially spiritually aware Christians to understand just what’s at stake and it lifts the veil on the future to reveal America’s possible demise shedding light on whether this once great nation can reverse course and be relevant at the not too distant prophetic end time.

HOLD ONTO YOUR HAT! NEW ARTICLES SERIES BASED ON “SHADOWLAND” STARTS NEXT WEEK!