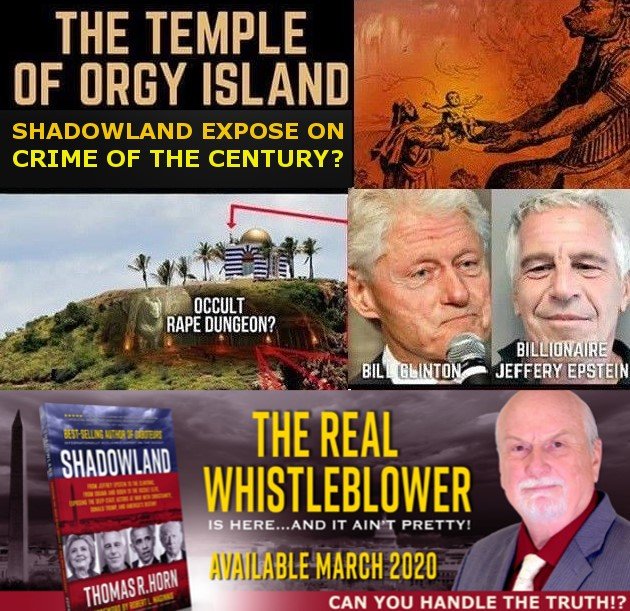 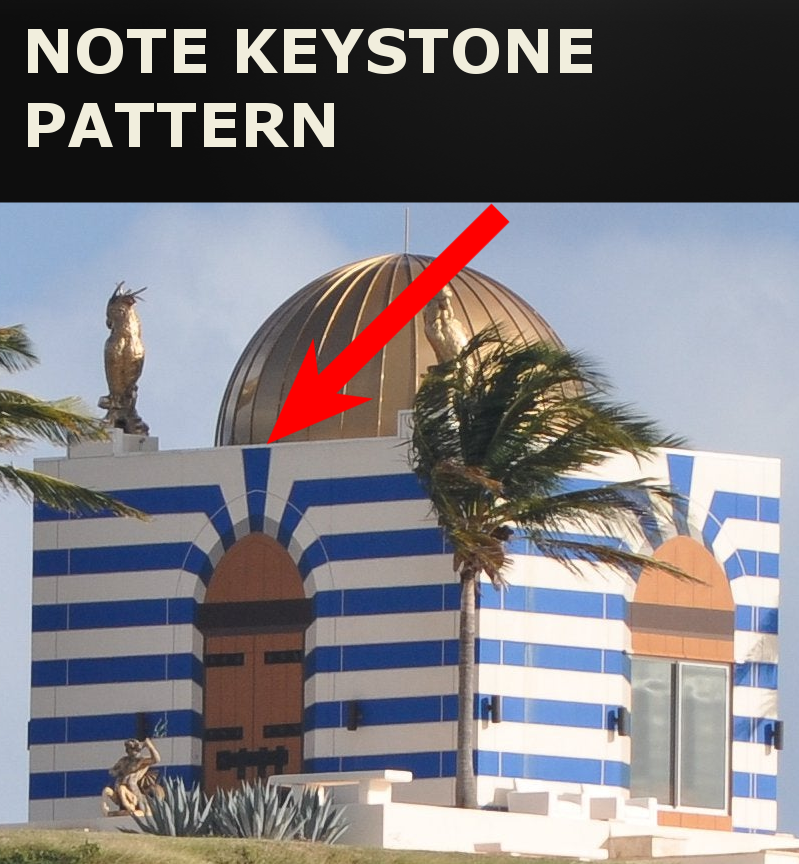 Famous freemason Albert Mackey, in his Encyclopedia of Freemasonry, said of the keystone that it is:

The stone placed in the center of an arch which preserves the others in their places, and secures firmness and stability to the arch. As it was formerly the custom of Operative Masons to place a peculiar mark on each stone of a building to designate the workman by whom it had been adjusted, so the Keystone was most likely to receive the most prominent mark, that of the Superintendent of the structure. Such is related to have occurred to that Keystone which plays so important a part in the legend of the Royal Arch Degree….In fact, in the Solomonic era, the construction of the arch must have been known to the Dionysian Artificers…[i]

It is telling and important here that Mackey recognizes the keystone design as dating back to “Dionysian Artificers” or architects, which modern high-degree masons esteem as the originators of occult structural designs—the three-dimensional language of “form”—derived from these ancient draftsmen and embedded with secret memories of symbolism, ancient myth and beliefs about gods and elements, and the metaphysical doctrines of the Mystery schools (which Freemasons hold they are the keepers of today). As such, the Dionysian Keystone is a “speaking symbol” for occultists and provides powerful reasoning around why Epstein chose such designs for his dark guests not only to enjoy at Pedophile Island but to come under the spell of—enchantment tied to the orgiastic human-sacrifices god that Dionysian architects were named after. As I noted in my book Zenith 2016:

Dionysus… is superficially depicted as the inventor of wine, abandon, and revelry, a description that seems inadequate in that it refers only to the basic elements of intoxication and enthusiasm, which was used of the Bacchae (the female participants of the Dionystic mysteries [those metaphysical ‘mysteries’ that Freemasons are keepers of today]; also known as Maenads and Bacchantes) in their rituals to experience Dionysus, the intoxicating god of unbridled human desire.

Ancient followers of Dionysus believed he was the presence that is otherwise defined as the craving within man that longs to “let itself go” and to “give itself over” to baser, earthly desires [as happened regularly at Epstein’s private island]. What a Christian might resist as the lustful wants of the carnal man, the followers of Dionysus embraced as the incarnate power that would, in the next life, liberate the souls of mankind from the constraints of this present world and from the customs that sought to define respectability through a person’s obedience to moral law. Until that day arrives, the worshippers of Dionysus attempted to bring themselves into union with the god through a ritual casting off of the bonds of sexual denial and primal constraint by seeking to attain a higher state of ecstasy. The uninhibited rituals of ecstasy (Greek for “outside the body”) were believed to bring the followers of Dionysus into a supernatural condition that enabled them to escape the temporary limitations of the body and mind and to achieve a state of enthousiasmos, or, “outside the body” and “inside the god.” In this sense, Dionysus represented a dichotomy within the Greek religion, as the primary maxim of the Greek culture was one of moderation, or “nothing too extreme.” But Dionysus embodied the absolute extreme in that he sought to inflame the forbidden passions of human desire. Interestingly, as most students of psychology will understand, this gave Dionysus a stronger allure among the Greeks who otherwise tried in so many ways to suppress and control the wild and secret lusts of the human heart. Dionysus resisted every such effort, and, according to myth, visited a terrible madness upon those who tried to deny him free expression. This Dionystic idea of mental disease resulting from the suppression of secret inner desires, especially aberrant sexual desires, was later reflected in the atheistic teachings of Sigmund Freud. Freudianism might therefore be called the grandchild of the cult of Dionysus. Conversely, the person who gave himself over to the will of Dionysus was rewarded with unlimited psychological and physical delights. These mythical systems of mental punishments and physical rewards based on resistance and/or submission to Dionysus were both symbolically and literally illustrated in the cult rituals of the Bacchae, as the Bacchae women (married and unmarried Greek women had the “right” to participate in the mysteries of Dionysus) migrated in frenzied hillside groups, dressed transvestite in fawn skins and accompanied by screaming, music, dancing, and licentious behavior. When, for instance, a baby animal was too young and lacking in instinct to sense the danger and run away from the revelers, it was picked up and suckled by nursing mothers who participated in the hillside rituals. On the other hand, when older animals sought to escape the marauding Bacchae, they were considered “resistant” to the will of Dionysus and were torn apart and eaten alive as a part of the fevered ritual. Human participants were sometimes subjected to the same orgiastic cruelty, as the rule of the cult was “anything goes,” including lesbianism, bestiality, etc. Later versions of the ritual (Bacchanalia) expanded to include pedophilia and male revelers, and perversions of sexual behavior were often worse between men than they were between men and women. Any creature that dared to resist such perversion of Dionysus was subjected to sparagmos (“torn apart’) and omophagia (“consumed raw”).

In 410 BC, Euripides wrote of the bloody rituals of the Bacchae in his famous play, The Bacchantes:

The Bacchantes…with hands that bore no weapon of steel, attacked our cattle as they browsed. Then wouldst thou have seen Agave mastering some sleek lowing calf, while others rent the heifers limb from limb. Before thy eyes there would have been hurling of ribs and hoofs this way and that, and strips of flesh, all blood be-dabbled, dripped as they hung from the pine branches. Wild bulls, that glared but now with rage along their horns, found themselves tripped up, dragged down to earth by countless maidens hands.[ii]

Euripedes went on to describe how Pentheus, the King of Thebes, was torn apart and eaten alive by his own mother as, according to the play, she fell under the spell of Dionysus. Tearing apart and eating alive of a sacrificial victim may refer to the earliest history of the cult of Dionysus. An ancient and violent cult ritual existing since the dawn of paganism stipulated that, by eating alive, or by drinking the blood of, an enemy or an animal, a person might somehow capture the essence or “soul-strength” of the victim. The earliest Norwegian huntsmen believed in this idea and drank the blood of bears in an effort to capture their physical strength. East African Masai warriors also practiced omophagia and sought to gain the strength of the wild by drinking the blood of lions. Human victims were treated in this way by Arabs before Mohammed, and headhunters of the East Indies practiced omophagia in an effort to capture the essence of their enemies.

Today, omophagia is practiced by certain voodoo sects as well as by cult Satanists, possibly illustrating an ongoing effort on the part of Satan to distort the original revelation of God, as eating human flesh and drinking human blood to “become one” with the devoured is a demonization of the Eucharist or Holy Communion. While the goal of the Satanist is to profane the holy, sparagmos and omophagia, as practiced by the followers of Dionysus, was neither an attempt at sacrilege or of transubstantiation (as in the Catholic Eucharist), consubstantiation (as in the Lutheran communion), nor yet of a symbolic ordinance (as in evangelical circles), all of which have as a common goal elevating the worshipper into sacramental communion with God. The goal of the Bacchae was the opposite—the frenzied dance, the thunderous song, the licentious behavior, the tearing apart and eating alive: all were efforts on the part of the Bacchae to capture the essence of the god (Dionysus) and bring him down into incarnated rage within man. The idea was not one of Holy Communion, but of possession by the spirit of Dionysus. When one recalls the horrific rituals of the followers of Dionysus, it’s easy to believe demonic possession actually occurred.[iii]

Earlier I mentioned how in occult and Masonic dogma the deeper meanings of symbols are often obscured so that only true initiates of the order can comprehend the hidden clues and meanings that otherwise remain inscrutable to most. What appears to be a grand-scale example of this esoteric practice also played out at Epstein’s New Mexico Zorro Ranch and on his private island in recent years involving a mysterious large rectangular earthen barrier or berm fortification of unknown function. The berm reflects uncanny similarity to the ancient Egyptian Shen or “Shenu,” a hieroglyphic representation of divinity (whether deities, pharaohs, or other influential persons) dating back to Mesopotamia.

The Shenu is often elongated similar to the berm area on Epstein’s island so that it might contain numerous objects, which were then considered magically protected by the pictogram charm and/or the gods associated with the Shenu, including Isis, Horus, Mut, Heka (“frog” goddess connected with children and witchcraft) and other Egyptian divinities.

While images of the enigmatic site on Epstein’s island were captured in 2013 bearing a detailed design at that time inside the approximately 20’ high walls with four walkways leading to an inner circle around a square, in 2017 as investigators closed in, it appears an intentional effort was made to disguise the uses of the area by replacing the perplexing layout with a temporary tennis court followed in 2019 by an empty containment field. However, the same original design of four walkways inside a confined area leading to a circular mid-section continues to be reflected at Epstein’s New Mexico Zorro Ranch as well, in a sizable “garden” that at first I thought might be a helicopter pad but that I later ruled out as such due to all the large woody landscaping a helicopter would not land on plus the scope of the field (note the scale of this area compared to Epstein’s 26,700 square feet mansion—once the largest home in New Mexico) not counting the fact that Epstein has a private airport very close by. 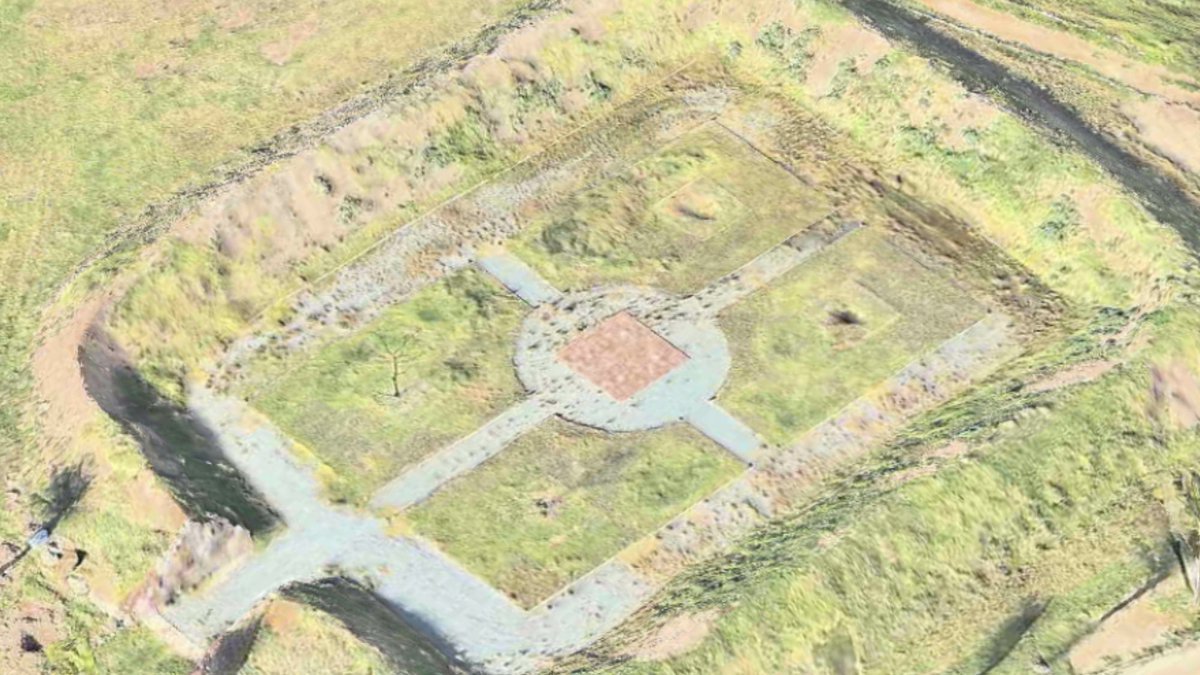 Shenu shaped berm area on Epstein island with twenty-foot high walls with four walkways leading to an inner circle around a square. 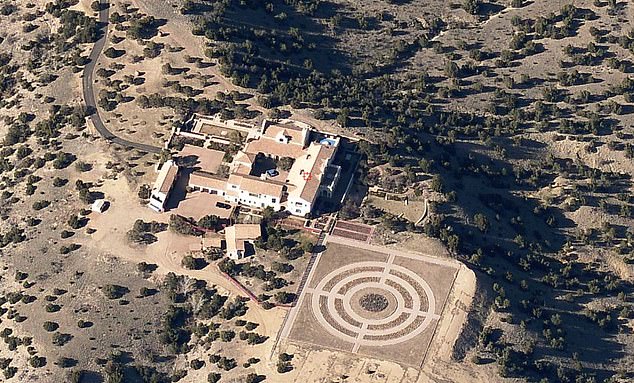 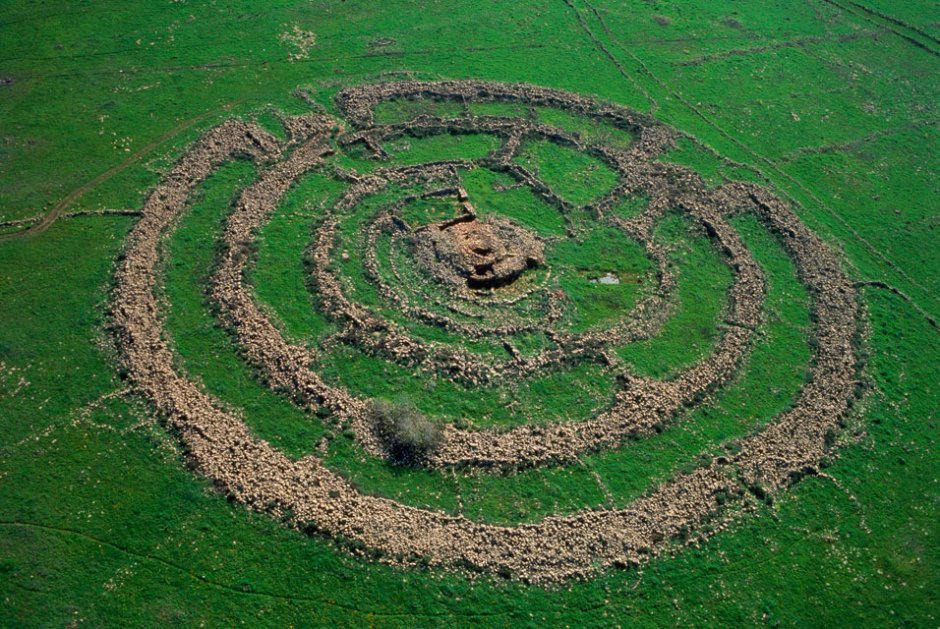 The circular patterns on Epstein’s properties first reminded me of Gilgal Refaim (Rujm el-Hiri) an ancient stone circular site in Israel. Gilgal in Hebrew means “a circle” while Refaim is connected to the “ghosts” of a race of giants that lived in the Bashan (Golan of today).

These areas and their design are practically identical to ancient cultic sites discovered in olden civilizations worldwide that were circular, square and/or rectangular. Having a long history predating the time of Christ by thousands of years, these ritual locations typically employed three main components—a temple (often domed like the one on Epstein’s island), a second area where ceremonials— frequently elaborate—were performed, and a third geometric pattern area (circle, square or rectangle) where the main sacrificial altar was located. We’ll get into that in the next entry.

UP NEXT: Earth Temples, Magic Circles, Sorcerers, And The Fine Art Of Demon Conjuring

[ii] Euripides, The Bacchantes, Dramatis Personare (Messenger to Pentheus concerning the Bacchantes), 410 BC.