AS WAS FIRST REVEALED IN DR. THOMAS HORN’S “THIRD TEMPLE” BOOK: Israel’s Endgame Is Full Ties With Saudi Arabia For Opening Up The Temple Mount, BUILDING THE THIRD TEMPLE

As Ynetnews in Israel reported this week: “The ink on the normalization agreement between the United Arab Emirates (UAE) and Israel has yet to dry but Israeli officials are already working on Jerusalem’s endgame in the Gulf. A senior Israeli official told Ynet sister publication Yedioth Ahronoth that Israel’s ultimate plan is to normalize relations with the Gulf’s most influential nation – Saudi Arabia. He also said the agreement between Israel and the UAE will allow Emiratis to visit and pray at the Al-Aqsa Mosque in Jerusalem, the third holiest site in Islam. “The agreement is a breakthrough for Muslims who wish to come in peace and pray at the al-Aqsa Mosque,” Kushner told the Washington Post. “Direct flights between the two countries will facilitate pilgrimages to al-Aqsa, a victory for religious pluralism and a rejection of the false narrative – used by extremists to bolster their ranks – that the mosque is under attack.”

However, for those who have read Dr. Horn’s bestselling new book The Rabbis, Donald Trump and the Top-Secret plan to build the third Temple, you will recall the following disclosure made last year in Horn’s work describing exactly what Ynetnews is now reporting and where it is leading. From pages 34-35:

These implications and anxieties surrounding the building of a Third Temple at Zion are not lost on ardent students of prophecy. They know the contest over this consecrated plot of land reflects profounder malaise that cannot be superficially perceived. Principalities and powers manipulate earthly governments, and the forthcoming construction project sits in the navel of an end-times clock that, once initiated, will quickly count down to the arrival of Antichrist, Armageddon, and the Second Coming of Jesus Christ. That’s the real reason secret meetings over control of the Temple Mount are proceeding outside the public’s view. Yet for the perceptive—those “with eyes to see and ears to hear,” as the Bible puts it—we clearly understand what is behind Palestinian and Muslim news agencies worried over the fact that “‘Saudi Arabia is currently investing a great deal of behind-the-scenes effort into taking away from Jordan its guardianship of the holy sites of Jerusalem,’ a senior official in the Palestinian Authority (PA) told Al-Monitor on condition of anonymity. The pressure seems linked to the Saudis’ friendly relations with the United States, and with President Donald Trump’s desire to win Arab support for his Middle East peace plan, which Jordan has not backed.”[i]

Until the murder of journalist Jamal Khashoggi—who publicly opposed the policies of Saudi Arabia’s new heir, Crown Prince Mohamed Bin Salman—the Saudi prince had been assiduously cultivating a relationship with Donald Trump and his son-in-law Jared Kushner (who has spent dozens of hours in phone calls and private meetings with the crown prince cementing a personal relationship with him[ii]) to guard the pursuits of his administration and Arabian interests in the US Congress and around the world. In trade for—or as part of—this diplomacy, the prince has spoken publicly in support of Israel having a right to their own land,[iii] and he even met in 2018 with American evangelical Christians “as the ultra-conservative Muslim kingdom seeks to open up more to the world and repair an image of religious intolerance.”[iv] Now that the CIA believes the Saudi prince may have played a role in the murder of Khashoggi, it is unclear what effect this may have on US relations.

Regardless, I am told and do believe that placing management of the Temple Mount into the hands of Saudis and progressive or “secular” Muslims and the US administration would be, by design, intentionally inching the world toward one aspect of Donald Trump’s “Deal of the Century” for Middle East peace (though the Third Temple negotiation could be part of a separate agreement) that cannot yet be uttered involving compromises that could ultimately allow for construction of the Third Temple. Even the secretary-general of the Muslim World League recently took “the unprecedented and potentially controversial step of urging Muslims to form a delegation alongside Christians and Jewish religious leaders to visit Jerusalem as a step toward peace.”[v] 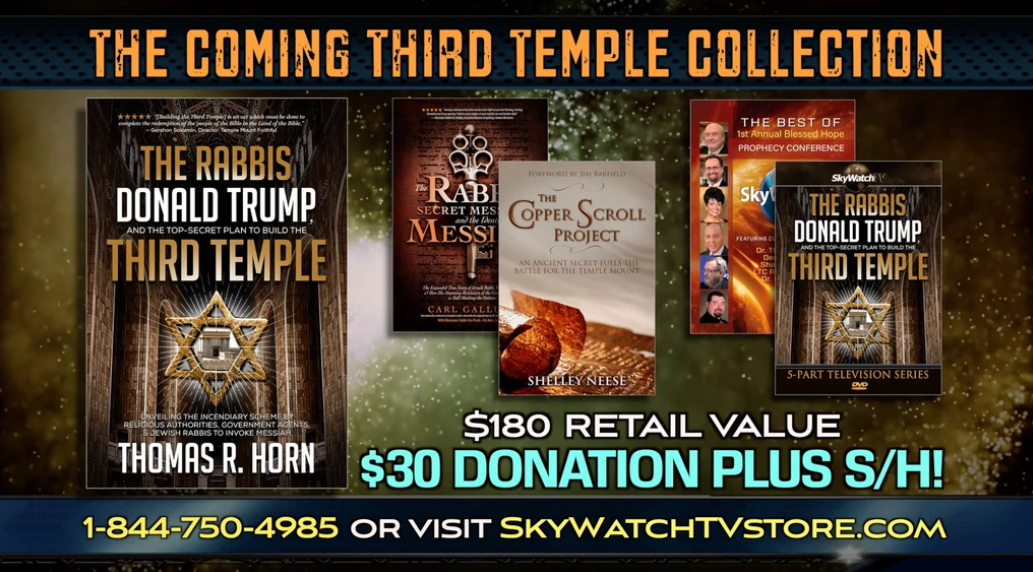