WAS IT A “CLOUDEATERS” (NEPHILIM) EXPERIMENT? Gigantopithecus Would Have Been Terrifying To Our Ancient Ancestors 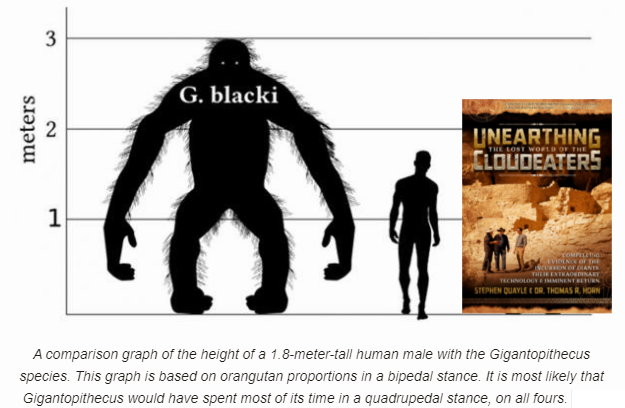 (SKYWATCH NOTE: Learn more about Gigantopithecus in the book Unearthing the Lost World of the Cloudeaters). From legends of Bigfoot to films like Mighty Joe Young, humans seem to have a fascination with giant ape-like creatures. This leads to the question of whether stories about giant apes have a basis in reality. Although the evidence for Bigfoot is ambiguous, there is fossil evidence for very large apes living in the past, particularly Gigantopithecus. In 1956, a jaw belonging to the creature was discovered by a farmer, which gave paleontologists a better understanding of the nature of Gigantopithecus. Since its discovery, scientists have learned much more about this mysterious “ape.” Based on a comparison with the tooth size to body size ratio in modern ape species, paleontologists estimate that a member of a Gigantopithecus species could have been up to 10 feet (3.05 meters) tall and probably weighed as much as 1,200 lbs. (544.31 kg)… (READ MORE)