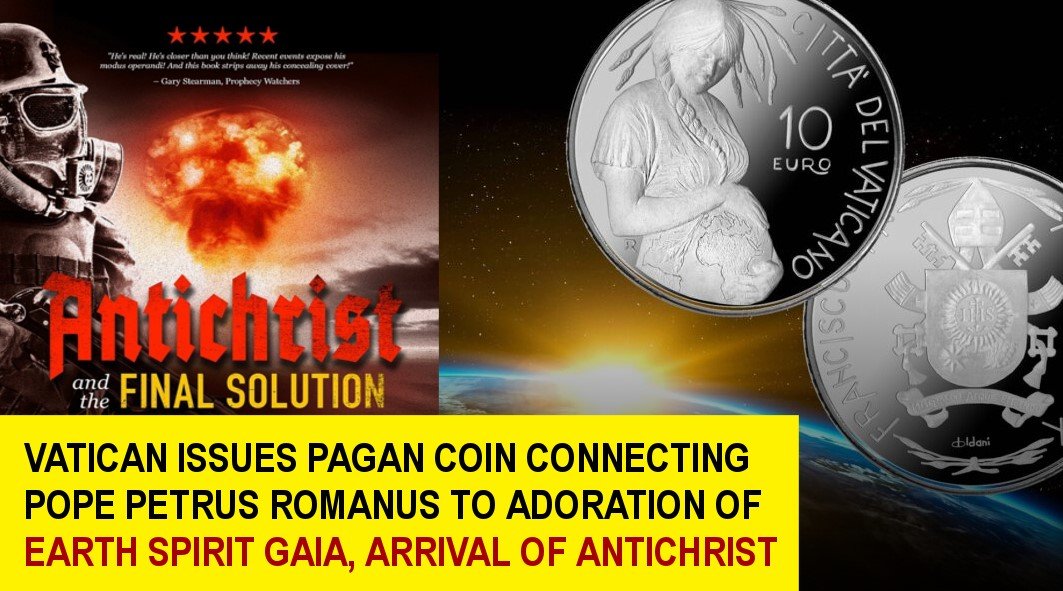 Marked by the symbols of the pagan Earth Mother and the emblem of Pope Francis, the planet Earth is featured on the new silver coin from the Vatican as a symbolic womb defended and looked upon by the earth mother. This is an ancient, pagan concept, and, as I have written elsewhere, the end-times celebration of a spirit the Bible calls “demonic” heralds arrival of Antichrist.

According to the Greeks, the greatest outcome of the love affair between Zeus and Leto was the birth of the most beloved—and soon to return oracle gods—Apollo, the spirit that will inhabit Antichrist according to the New Testament (see 2 Thess 2:3; Revelation 17:8 where the Greek word “Apollyon-Apollo is translated “Perdition” in the KJV). More than any other deity in ancient history, Apollo represented the passion for prophetic inquiry among the nations.

Apollo, with his twin sister Artemis, was said by the Greeks to have been born in the land of Delos—the children of Zeus (Jupiter) and of the Titaness Leto. While an important oracle existed there and played a role in the festivals of the god, it was the famous oracle at Delphi that became the celebrated mouthpiece of the Olympian. Located on the mainland of Greece, the omphalos of Delphi (the stone the Greeks believed marked the center of the earth) can still be found among the ruins of Apollo’s Delphic temple. So important was Apollo’s oracle at Delphi that wherever Hellenism existed, its citizens and kings, including some from as far away as Spain, ordered their lives, colonies, and wars by its sacred communications. It was here that the Olympian gods spoke to mortal men through the use of a priesthood, which interpreted the trance-induced utterances of the Pythoness or Pythia. She was a middle-aged woman who sat on a copper-and-gold tripod, or, much earlier, on the “rock of the sibyl” (medium), and crouched over a fire while inhaling the smoke of burning laurel leaves, barley, marijuana, and oil, until a sufficient intoxication for her prophecies had been produced. While the use of the laurel leaves may have referred to the nymph Daphne (Greek for “laurel”), who escaped from Apollo’s sexual intentions by transforming herself into a laurel tree, the leaves also served the practical purpose of supplying the necessary amounts of hydrocyanic acid and complex alkaloids which, when combined with hemp, created powerful hallucinogenic visions. Another drug possibly used by the Pythia is known as DMT [dimethyltryptamine]. This chemical—naturally produced in the pineal gland and present in some wild plants—has been used for thousands of years by shamans to contact the spirit world. Others suggest that the Pythia may have employed a version of the psychoactive drug “absinthe” to induce a spirit-traversing mental gateway—a practice also employed throughout Greek paganism as well as by shamans of other cultures but condemned in the Scriptures (Galatians 5:20; Revelation 9:21 and 18:23) as pharmakeia—the administering of drugs for sorcery or magical arts in connection with demonic contact. The book, Forbidden Gates, discusses this phenomenon in more recent times, saying of absinthe in particular:

This unique, distinctive distilled liquid of pale green color was known in the late nineteenth and early twentieth centuries as the “green fairy.” Although its consumption almost became an obsession across Europe and more mystical cosmopolitan centers in America like New Orleans, it was most closely associated with the bohemian artistic culture thriving at the time. It was a favorite of eclectic artists such as the painter Salvador Dali and writer Oscar Wilde, due to its reliable propensity to facilitate their contact directly with their inspirational spirit “muses.” Occult magician Aleister Crowley was so devoted to absinthe for its spiritual invocation capabilities that he wrote his famous lengthy poem, “The Green Goddess,” in its honor. It was the only alcoholic beverage banned across Europe (as well as North America) because the diagnosed “absinthism” addiction and effects were deemed much worse than regular alcohol. The curious matter about absinthe is that it is distilled from the wormwood plant, which has the official name of Artemis absinthium. Artemis was a Greek and Roman goddess who was (a) considered a “huntress”; (b) associated with fire and keys; and (c) the sister of Apollo. She was associated with the goddess Hecate, who was known as a “luminal” god who controlled the access to portals in the spirit world.[i] (Emphasis added)

Whatever the case may have been for the ancient Pythian or Sibyl, it was under the influence of such “forces” that she prophesied in an unfamiliar voice thought to be that of Apollo, himself. During the Pythian trance, the medium’s personality often changed, becoming melancholic, defiant, or even animal-like, exhibiting a “possession” psychosis that may have been the source of the werewolf myth, or lycanthropy, as the Pythia reacted to an encounter with Apollo/Lykeios—the wolf god. Delphic “women of python” prophesied in this way for nearly a thousand years and were considered to be a vital part of the pagan order and local economy of every Hellenistic community.

WATCH AS DR. THOMAS HORN EXPLAINS THE CONNECTION BETWEEN THE PROPHECIES OF THE CUMAEAN SIBYL, THE VATICAN, THE GREAT SEAL OF THE UNITED STATES AND THE COMING OF ANTICHRIST!

Whether by trickery or occult power, the prophecies of the Sibyls were sometimes amazingly accurate. The Greek historian Herodotus (considered the father of history) recorded an interesting example of this. Croesus, the king of Lydia, had expressed doubt regarding the accuracy of Apollo’s oracle at Delphi. To test the oracle, Croesus sent messengers to inquire of the Pythian prophetess as to what he, the king, was doing on a certain day. The priestess surprised the king’s messengers by visualizing the question and by formulating the answer before they arrived. A portion of the historian’s account says:

The moment that the Lydians (the messengers of Croesus) entered the sanctuary, and before they put their questions, the Pythoness thus answered them in hexameter verse: “…Lo! on my sense there striketh the smell of a shell-covered tortoise, Boiling now on a fire, with the flesh of a lamb, in a cauldron. Brass is the vessel below, and brass the cover above it.” These words the Lydians wrote down at the mouth of the Pythoness as she prophesied, and then set off on their return to Sardis.… [When] Croesus undid the rolls…[he] instantly made an act of adoration…declaring that the Delphic was the only really oracular shrine.… For on the departure of his messengers he had set himself to think what was most impossible for any one to conceive of his doing, and then, waiting till the day agreed on came, he acted as he had determined. He took a tortoise and a lamb, and cutting them in pieces with his own hands, boiled them together in a brazen cauldron, covered over with a lid which was also of brass.[ii] (Herodotus, Book 1, 47)

Another interesting example of supernatural insight by an Apollonian Sibyl is found in the New Testament book of Acts. Here, the demonic resource that energized her visions is revealed.

And it came to pass, as we went to prayer, a certain damsel possessed with a spirit of divination [of python, a seeress of Delphi] met us, which brought her masters much gain by soothsaying: The same followed Paul and us, and cried, saying, These men are the servants of the most high God, which shew unto us the way of salvation. And this did she many days. But Paul, being grieved, turned and said to the spirit, I command thee in the name of Jesus Christ to come out of her. And he came out the same hour. And when her masters saw that the hope of their gains was gone, they caught Paul and Silas.… And brought them to the magistrates, saying, These men, being Jews, do exceedingly trouble our city. (Acts 16:16–20)

The story in Acts is interesting because it illustrates the level of culture and economy that had been built around the oracle worship of Apollo. It cost the average Athenian more than two days’ wages for an oracular inquiry, and the average cost to a lawmaker or military official seeking important state information was charged at ten times that rate. This is why, in some ways, the action of the woman in the book of Acts is difficult to understand. She undoubtedly grasped the damage Paul’s preaching could do to her industry. Furthermore, the Pythia of Delphi had a historically unfriendly relationship with the Jews and was considered a pawn of demonic power. Quoting from Zenith 2016, we read:

Delphi with its surrounding area, in which the famous oracle ordained and approved the worship of Asclepius, was earlier known by the name Pytho, a chief city of Phocis. In Greek mythology, Python—the namesake of the city of Pytho—was the great serpent who dwelt in the mountains of Parnassus.… In Acts 16:16, the demonic woman who troubled Paul was possessed with a spirit of divination. In Greek this means a spirit of python (a seeress of Delphi, a pythoness)…[and] reflects…the accepted Jewish belief…that the worship of Asclepius [Apollo’s son] and other such idolatries were, as Paul would later articulate in 1 Corinthians 10:20, the worship of demons.[iii]

So what does this have to do with the Vatican and the second coming of Apollo, the spirit that soon will reside in Antichrist?

The Cumaean Sibyl (also known as Amalthaea), whose prophecy about the return of the god Apollo is encoded in the Great Seal of the United States, was the oldest of these Sibyls and the seer of the underworld who, in the Aeneid, gave Aeneas a tour of the infernal region. This adds to a mystery of adoption of the Pythians and Sibyls by the Vatican as “vessels of truth.” These seers, whose lives were dedicated to channeling from frenzied lips the messages of gods and 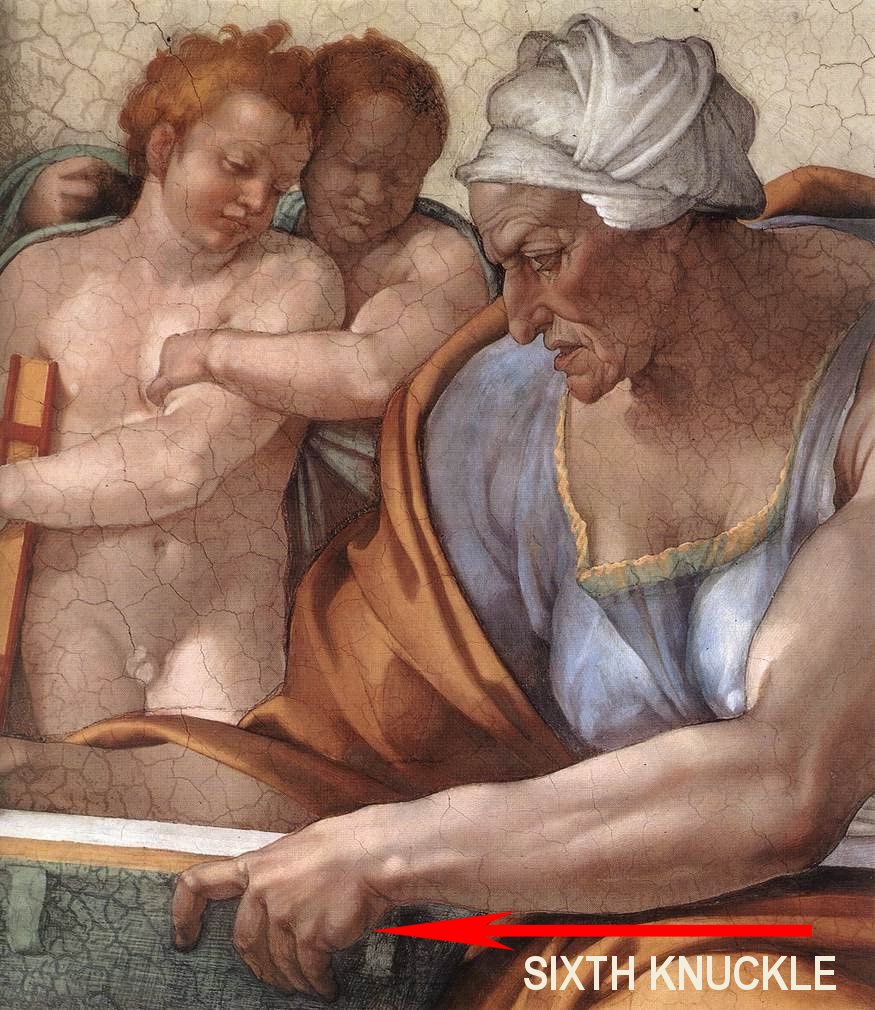 goddesses, turn up in Catholic art, from altars to illustrated books and even upon the ceiling of the Sistine Chapel, where five Sibyls including the Delphic (like Paul cast a demon out of) join the Old Testament prophets in places of sacred honor. Yet it is the Cumaean who not only sits so prominently inside Catholicism’s most celebrated chapel, but who’s painting, on close examination, unveils a secret—a magnificent clue—which her Italian Renaissance artist left concerning her, and her returning Lord’s, origin and identity. For upon consideration, the portrait reveals “the sign of the 6th knuckle.” The Cumaean’s left thumb is inside the book and the fingers of her left hand wrapped outside in standard book-holding fashion. A clearly visible extra knuckle is portrayed, secreted perhaps by Michelangelo to depict a sixth digit bent under the palm, or to illustrate that a sixth finger had been lost or cut off at the knuckle. Either meaning is deeply occultic, and as students of history and the Bible clearly know, this ties both the Sibyl and her prophesied savior Apollo to the offspring of the fallen Watchers, the Nephilim (see 2 Samuel 21:20), of which Apollo/Osiris/Nimrod was chief.

Now, they have a silver coin to herald her—and her son’s arrival—joined to Pope Francis, the “Final Pope”.