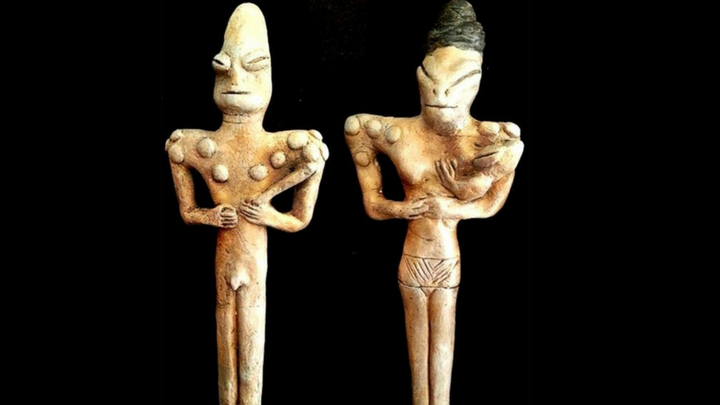 Despite any prejudicial slants regarding God, most scholars agree that human civilization emerged in the Fertile Crescent, the land between the Tigris and Euphrates rivers, around 10,000 BC. (We’re using dates that are generally accepted by a consensus of scholars so we don’t get bogged down arguing about the timeline.) Agriculture, cities, writing, trade, science, and organized religion all developed in a broad arc that stretched from Egypt through the Levant and down into Mesopotamia. 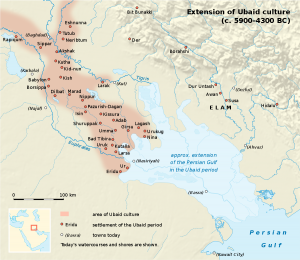 Map of the extent of the Ubaid culture (click to enlarge).

Curiously, the evidence uncovered thus far supports the idea that Adam and Eve, and later Cain, traveled east of Eden to begin their lives. (Note: We place the Garden of Eden in the vicinity of Jerusalem.) As such, the first evidence of civilization appears at Sumer, today’s southeastern Iraq, where it seems to have emerged fully formed with no preliminary steps.

A few scholars speculate that earlier attempts to organize what we call “civilization” lie at the bottom of the Persian Gulf. The theory goes that Eden, from which all humans came, stood in the “Gulf Oasis,” a lush valley watered by the Tigris and Euphrates rivers, as well as the Karun River from Iran and the Wadi Batin from Saudi Arabia. The Persian Gulf rose rapidly between 6000 and 5000 BC, during the Neolithic Wet Phase, and as the Gulf moved northward, people moved ahead of it, leaving the evidence of their earlier settlements hidden beneath the gulf’s waves.

Scholars refer to this Mesopotamian civilization as the Ubaid culture. Of course, that’s not what the people who lived in it called themselves; we don’t know their proper name because they never invented writing. The Ubaid civilization gets its name from Tell al-`Ubaid, a small settlement mound in southeast Iraq where two well-known archaeologists, Henry Hall and Sir Leonard Woolley, first dug up bits of Ubaid pottery between 1919 and 1924.

Does The Bible Say They Were Real AND ARE COMING BACK!?

Archaeologists who study the Ubaid culture agree that its influence spread from Eridu in southeast Iraq, eventually going as far as what is today northwest Iran, northern Syria, southern Turkey, and the Levant (Syria, Lebanon, Jordan, and Israel). 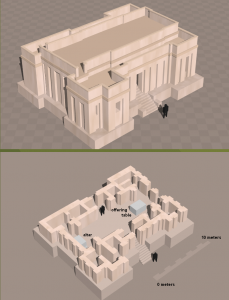 Temple of the god Enki at Eridu, the E-abzu (“House of the Abyss”). Click to enlarge.

What is most interesting about Eridu is that, besides being the oldest city in Sumer, it was the home of the oldest and largest ziggurat (step pyramid) in Mesopotamia—and, we believe, the actual Tower of Babel (see chapter 3 of Derek’s book The Great Inception or chapter 18 of our previous book Veneration for the evidence). This was the temple of one of the most important gods of the ancient Near East, called Enki by the Sumerians and Ea by the later Akkadians and Babylonians. Enki was the god of the sweet waters, those needed for life. To illustrate this, he was depicted with two streams of water flowing from his shoulders to represent the Tigris and Euphrates rivers, the main sources of fresh water in Mesopotamia.

Enki was the god of magic, craftsmanship, and wisdom. Although Enlil was king of the gods (before the rise of Babylon in the time of Abraham and Isaac, when Enlil was replaced at the top of the pantheon by Marduk), Enki was the keeper of the mes (sounds like “mezz”). The mes were decrees of the gods that formed the fundamental concepts and gifts of civilization—everything from religious practices to social interaction to music.

The Babylonian creation myth, the Enuma Elish, describes how everything on earth came into being after Marduk defeated chaos in the form of the monstrous she-dragon, Tiamat. (Yes, this is another lie from the Fallen Realm.) Marduk, the chief god of Babylon, was the son of Enki. However, the older Sumerian story credits Enki with giving life to all things, including mankind, and names Enlil the slayer of Tiamat.

Apparently, the fallen realm squabbles over who gets credit for stealing God’s ideas.

There’s one more aspect of life in the ancient Near East we’d like to call to your attention. It’s something we only hear about from fringe pseudo-scholars who blame the phenomenon on extraterrestrials. (Think big hair.) Scholars, that is, archaeologists and sociologists, have known at least since the late 1940s that before the people of Mesopotamia learned how to write, they’d begun turning their children into coneheads. 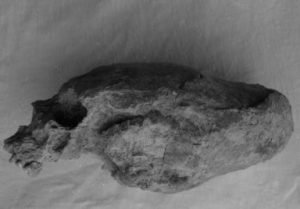 Skull found at Chogha Sefid in norrhwestern Iran dated to about 7000 BC.

Based on human remains dated to between about 10,000 BC and 3500 BC, it appears that cranial deformation was widespread in the Ubaid culture, and at Eridu, the world’s first city. If Cain or his son established Eridu (Cain’s grandson was named Irad,[1] etymologically similar to Eridu), then we can place them at ground zero for the worldwide phenomenon of head-shaping.

An archaeological dig at Eridu just after World War II revealed about a thousand bodies that had been buried during the Ubaid period. Of the 206 sets of remains the archaeologists exhumed, “all of the crania had been deformed in one fashion or another.”[2] 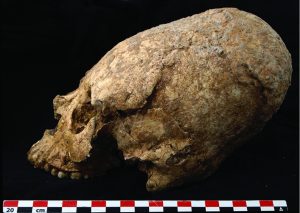 Deformed skull from tomb at Tol-e Chega Sofla in northwest Iran (c. 4000 BC).

Got that? 206 out of 206. Not a few, and not just the elites, but every person from every stratum of the Eridu culture had a deformed skull.

Evidence of head-shaping has been found at sites all over Iraq, southwestern Iran, eastern Turkey, the valleys of the Zagros mountains, and the western shores of the Persian Gulf, dated from 7500 BC to about 4000 BC. After that, the practice seems to disappear.[3]

Here’s another bit of data to chew on: At Eridu and nearby sites in pre-Flood southern Sumer, and only there, archaeologists have found about 120 terracotta figurines that scholars call ophidian, meaning “snake-like.” These figurines are slender bipeds, adorned with button-like protuberances, more often female than male, and often in poses that are exclusively mammalian; for example, a female lizard-like figure suckling an infant.

Now, ancient astronaut evangelists on cable TV shows claim that these reptilian mothers were our space ancestors, the Anunnaki who came from the stars to create humanity by tinkering with ape DNA.

They’re thinking along the right lines, but by ignoring the supernatural, they miss the most likely answer. 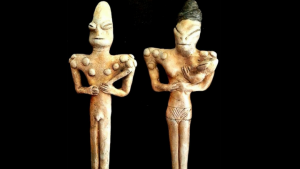 We’ll never know for certain why this happened, but we can speculate. Perhaps, the people who formed the earliest human civilizations copied a look that someone, somewhere, had seen and decided was the physical ideal. We still do this. Modern-day teens copy hairstyles and fashion from magazines and television, and men emulate the latest Marvel hunk, right? Except that the ophidian style head-shaping fashion statement didn’t change with the seasons; it appears to have been worn by nearly everybody in the ancient Near East for more than six thousand years!

For it to last that long, it must have conveyed some advantage to those who practiced it. Think back to what we discussed about the serpentine nachash and seraphim, and remember that at least one of them rebelled against Yahweh. Is it possible that the citizens of the prehistoric Near East were trying to curry favor with a god? 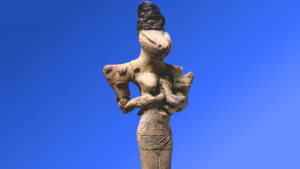 As mentioned earlier, Eridu is considered to be the center of the Ubaid culture. The Ubaid period is defined as the civilization in the ancient Near East just before the time of Nimrod and the Tower of Babel, roughly between 6500 BC and 3800 BC. It would have begun not long after Adam and Eve got kicked out of the Garden.

Now, remember that God wanted humanity to “have dominion over the fish of the sea and over the birds of the heavens and over every living thing that moves on the earth”?[4] He did not direct mankind to form into stratified groups, with one person atop the social pyramid. We weren’t to take dominion over each other. As Jesus told His disciples thousands of years later, “You know that the rulers of the Gentiles lord it over them, and their great ones exercise authority over them. It shall not be so among you.”[5]

Adam and Eve were created to work the land. God designed humans to be self-sufficient—growing our own food, tending our own flocks, and helping each other whenever and however we’re needed. When you live that kind of life, you’re too busy to dominate your neighbors. And since you don’t depend on handouts for your family’s daily bread, government cannot dictate to you. It makes sense that Israel was led by judges in times of trouble during its early years, but a king wasn’t part of the original plan—even though God, who knows the end from the beginning, surely saw what was coming and let the Hebrews make Saul king anyway. 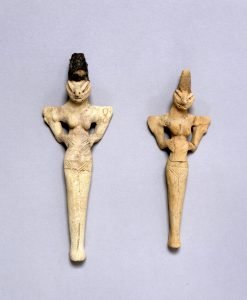 Female ophidian figurines found at site of ancient city of Ur in southeast Iraq, now on display at Penn Museum in Philadelphia (click to enlarge).

Now, archaeologists and sociologists have noticed two other aspects of civilization that commenced during the Ubaid period: first, the transition from a rural to an urban society, and second, their society becoming increasingly stratified. The evidence (primarily grave goods) indicates that, as people moved from the country to the city, the rich got richer and the poor got poorer. Just like today.

The Ubaid period also saw the construction of the first temples in Mesopotamia. Each of their cities worshiped a “city god” for whom the locals built a temple. And each of these temples had a granary for collecting the offerings of the commoners. Of course, this required somebody to oversee offerings and storage of the commodities, but also the recording of who provided the offering and how much was given—a ledger of sorts, requiring a new skill: writing. Archaeologists and sociologists believe this led to an elite class of hereditary leaders and priests who determined which folks deserved to receive grain from these granaries during times of famine. Substitute “income tax” and “social security withholding” for grain offerings, and it’s clear that things haven’t changed all that much in the last eight thousand years.

We can only speculate how such a system emerged. Logically, it’s a pretty good guess that the rebel entities who’d rose up against Yahweh at this early stage had set themselves up as these city gods. It’s also conceivable, based on what we know about angels from the Bible, that one or more of them appeared to the pre-Sumerians (possibly even Cain) and explained that, as gods, 1) they each needed a house or temple, and 2) each temple required a priest-king to oversee the offerings and ensure that all the city gods were pleased. The result? The upper class—kings, priests, and scribes—increasingly lived in luxury, while the peasants worked the land to support them. There was no middle class.

From the point of view of the Fallen Realm, destroying the world was much easier when you only had to manipulate a handful of useful idiots who then convinced the rest of the people to do things your way. As evidence, archaeologists have concluded that the Ubaid period was a time of increasing disparity between the classes,[6] but they miss the hidden truth because they fail to examine the evidence through a spiritual lens. Instead, they dissect more tangible data, such as climate, technology, and artistic expression (i.e., those ophidian figurines). They blindly miss the possibility that the unseen realm may have guided these cultural changes—one might say they gave mankind secret knowledge. And it was done to corrupt humanity and render it unfit for God’s purposes.

The long war lies at the heart of all history. But if Christians remain blind and don’t admit to these truths, then we can bet secular historians, archaeologists, and anthropologists won’t bother to put on those “spiritual eyeglasses.”

[3] Kirsi O. Lorentz. “Ubaid Headshaping: Negotiations of Identity Through Physical Appearance?” in Beyond the Ubaid: Transformation and Integration in the Late Prehistoric Societies of the Middle East, Robert A. Carter and Graham Philip eds. (Chicago: University of Chicago Oriental Institute, 2010), pp. 141–142.