Giants, Gods, and Dragons (Part 6): The Messiah, Mount Hermon, and Jack the Ripper 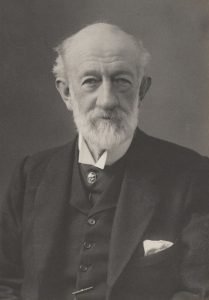 Sir Robert Anderson served as assistant police commissioner of London’s Metropolitan Police during the 1888 Jack the Ripper investigations. While it may seem incongruent to bring a nineteenth-century policeman into our discussion of Daniel’s prophetic visions, it is actually quite enlightening. Sharon’s research into police departmental structure during the Ripper investigation forms the bedrock for The Redwing Saga series of novels. During that research, she discovered a marvelous connection between these serial murders and, of all places, Mount Hermon: the very mountain where the Watchers of Enoch descended and dared to take human women as their “wives.”

We’ll return to Anderson in a moment, but first, let’s consider his superior in the Metropolitan Police Department, Commissioner Sir Charles Warren.

Before his appointment as police commissioner, mathematics “nerd” Warren served his native England as an army surveyor in Egypt, South Africa, and the Levant—including the ancient sites of Jericho and Jerusalem. As part of his duties, Warren surveyed the Old City and the Temple Mount. In 1867, he discovered and documented the details of “Warren’s Shaft,” a vertical channel next to Gihon Spring that provided fresh water to Bronze Age and Iron Age Jerusalem. 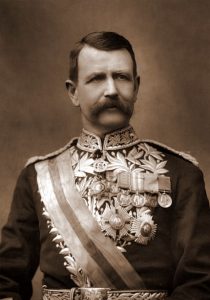 In 1869, on behalf of the Palestine Exploration Fund, Sir Charles climbed up the forbidding sides of Mount Hermon to determine its true height and describe any archaeological sites found there. As such, Warren explored, measured, and sketched an ancient temple known as Qasr Antar. Here, the visitor passed through a temple, but was then forced him to continue upwards along the peak, in a peculiar anti-clockwise spiral pattern, in order to reach the summit.

The southern peak’s rocky terrain had been scooped out to receive ritual libations to the god or gods of the mount. In confirmation of this theory, Warren discovered within the area a strange stele (alternatively spelled stela; a stone pillar or marker), engraved on one side in ancient Greek. Once translated, the text is chilling to anyone who’s read of the Watchers’ descent onto Hermon and the vow each had to make to satisfy their leader Semjâzâ:

According to the command of the greatest and Most Holy God, those who take an oath, proceed from here.1 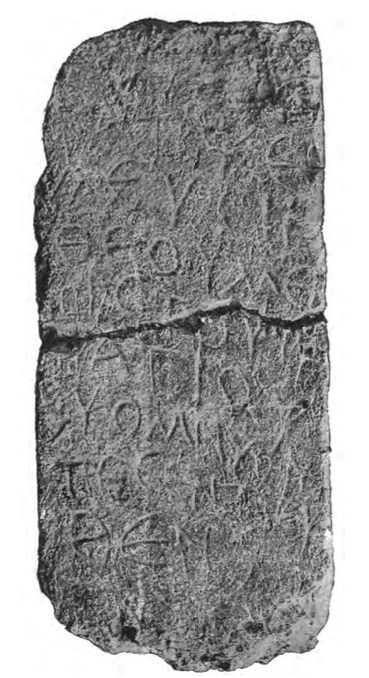 The stele discovered by Sir Charles Warren inside the temple on the summit of Mount Hermon.

After leaving the summit, Warren chose to remove the marker from Hermon’s slopes and carry it down the nine thousand-foot height for transfer to London. But being four feet thick and far heavier than his team could manage, the surveyor ordered the stone to be sliced longitudinally to reduce its thickness. Though the lighter weight did make the trip down the mountain easier, the ancient stone suffered as a result, cracking horizontally along its midsection.

The marker is currently housed at the British Museum, listed as Item 1903,0422.1.2 While visiting the museum in 2019, we tried to find the marker, but were told it is no longer displayed to the public.

In a strange coincidence and through a series of personal life changes that only our wonderful Lord might contrive, Sir Charles Warren eventually found himself working alongside a fellow Bible archaeology enthusiast. During the 1888 Jack the Ripper investigation, Warren’s assistant commissioner for crime was Sir Robert Anderson—mentioned earlier. Besides holding a degree in law, this erudite gentleman also held a degree in divinity; it was in this capacity, as a clergyman, that he published many treatises on the prophet Daniel. With the doggedness of a trained policeman and prosecutor, Sir Robert approached the study of Daniel’s seventy-week vision and dared to calculate the clues of its possible timing.

Know therefore and understand that from the going out of the word to restore and build Jerusalem to the coming of an anointed one, a prince, there shall be seven weeks. Then for sixty-two weeks it shall be built again with squares and moat, but in a troubled time. And after the sixty-two weeks, an anointed one shall be cut off and shall have nothing. (Daniel 9:25–26a; emphasis added)

As mentioned earlier, seven weeks added to sixty-two gives us sixty-nine total weeks until “an anointed one shall be cut off.” Believing this sixty-nine-week period must have ended sometime during Christ’s lifetime, Anderson endeavored to follow every clue at hand. He lists his thoughts in The Coming Prince, a powerful and insightful book.3

WHO OR WHAT is CHAOSKAMPF and the “GIANT LIVING CREATURES” in heaven? Will they be here SOON!?

Beginning on page 52, we read a summary of Anderson’s calculations. (All emphasis is added.)

If you wonder at the precision of these statements and calculations, Anderson goes on to explain that he was:

…indebted to the courtesy of the Astronomer Royal, whose reply to my inquiry on the subject is appended:

What a mind Sir Robert Anderson possessed! Again, we strongly recommend The Coming Prince to you, for it is filled with incredible insights and scholarly exposition. Sharon certainly found Sir Charles Warren’s connection to Mount Hermon fascinating; but then to discover that a second man, Sir Robert Anderson—who served side by side with Warren during that pivotal crime spree—had studied biblical archaeology and prophecy and composed entire volumes on both positively made her shout for joy!

Even today, Jack the Ripper remains a mystery; his identity is now synonymous with evil: a bogeyman embodiment of the ancient chaos-dragon, who would destroy all humans just to spite the Creator.

We now turn to one of the men who hunted Ripper to compute the timing of Christ’s entry into Jerusalem. Instead of welcoming Him as their Messiah, most in the city saw Him as an invader—even a charlatan. And so, He would be “cut off” and become a substitutionary sacrifice in our place.

Since therefore the children share in flesh and blood, he himself likewise partook of the same things, that through death he might destroy the one who has the power of death, that is, the devil, and deliver all those who through fear of death were subject to lifelong slavery. (Emphasis added)

By taking on flesh, the Lord provided a release from the curse of spiritual death, placed on us in the Garden. And it returns us to our original positions as members of the divine council. That is what this current battle is all about, and it is a continuation of the original war, the Chaoskampf.

Sir Robert Anderson’s calculations give us the very day when the first sixty-nine weeks ended!

And, according to the angel (most likely Gabriel), there is one more “seven” of years remaining until Israel is finally redeemed and released from bondage to the enemy. If we can rely upon this nineteenth-century master detective’s calculations—and many scholars do—then Christ literally fulfilled the first sixty-nine weeks to the very day; therefore, we may assume the final week of the seventy-week prophecy will proceed the same way—in literal fashion.

When Jesus was “cut off” on that Palm Sunday, the prophetic pause button was pressed. Ever since then, the world has waited for the timeline’s clock to resume ticking.

[1] Translation of the Mount Hermon stela by George Nickelsburg.

[3] Sir Robert Anderson, The Coming Prince, Or, the Seventy Weeks of Daniel: With an Answer to the Higher Criticism (London: James Nisbett and Company, 1915).