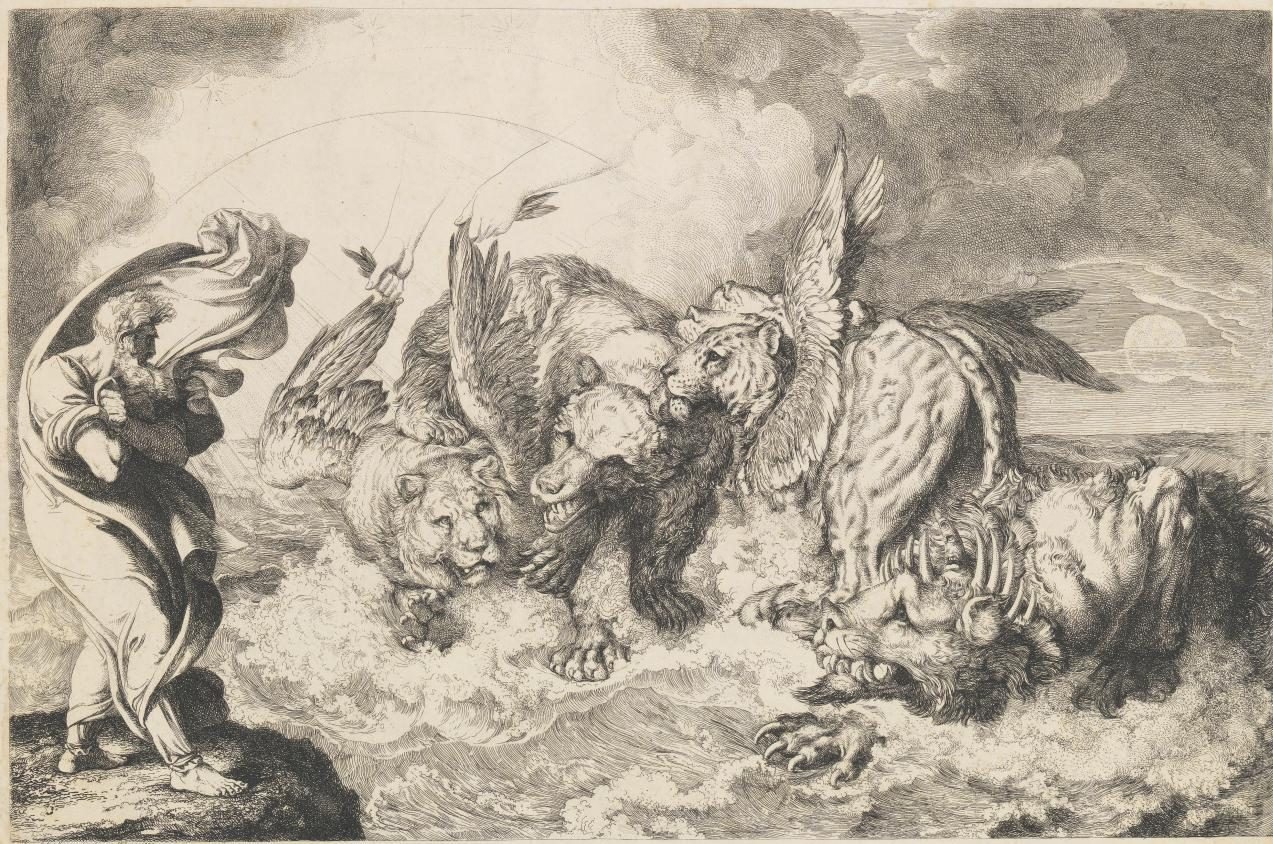 The seventy-weeks vision covers the total period of Gentile rule over the land of Israel. But if Jerusalem is considered the location of the Lord’s mount of assembly, then it is the true center—the omphalos—of the world, and the prime target for the Fallen Realm’s plots. Is it any wonder that the small-g gods want to blind us to this prophetic truth? The seventy-weeks timeline is a countdown to their final doom!

To forestall this inevitability, these rebel angels and their demonic offspring try to convince human governments to invade, or, failing that, to redraw the borders of Israel—even erase all history of the nation ever having lived there. But archaeological evidence is mounting that refutes that claim, meaning it will take a very big eraser if the Fallen Realm wish to maintain control of the Temple Mount through the Gentile nations. 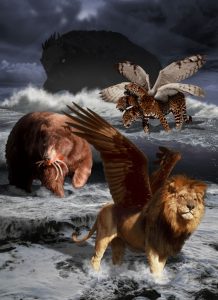 But a day is coming when the Lord will judge these rebels, and it is our belief that the Day of the Lord is close at hand. The people of Israel have yet to establish true autonomy. Despite becoming a supposedly sovereign nation in 1948, Israel is not permitted to exist or make foreign policy without United Nations’ oversight and input. The leaders of the West constantly act as though it is they, not her own people, who determine Israel’s future. This Gentile rule is just what Daniel foresaw all those centuries ago: Israel would live beneath the yoke and oversight of the Gentiles until the seventy weeks were complete.

To understand which nations would achieve this, we turn again to Daniel, who was shown these future periods of Gentile rule by the angel Gabriel. It was in the first year of Belshazzar king of Babylon that Daniel experienced “a dream and troubling visions” as he lay in his bed. As soon as awoke, he wrote down the dream, recorded for us in Daniel 7:

I saw in my vision by night, and behold, the four winds of heaven were stirring up the great sea. [Note: The four winds are also mentioned in Revelation 7, and the “great sea” could mean the Mediterranean, which gave rise to these beasts, but it might also represent yam or Chaos; see our earlier discourse on the Chaoskampf]. And four great beasts came up out of the sea, different from one another. The first was like a lion and had eagles’ wings. Then as I looked its wings were plucked off, and it was lifted up from the ground and made to stand on two feet like a man, and the mind of a man was given to it.

And behold, another beast, a second one, like a bear. It was raised up on one side. It had three ribs in its mouth between its teeth; and it was told, “Arise, devour much flesh.”

After this I looked, and behold, another, like a leopard, with four wings of a bird on its back. And the beast had four heads, and dominion was given to it.

After this I saw in the night visions, and behold, a fourth beast, terrifying and dreadful and exceedingly strong. It had great iron teeth; it devoured and broke in pieces and stamped what was left with its feet. It was different from all the beasts that were before it, and it had ten horns.

I considered the horns, and behold, there came up among them another horn, a little one, before which three of the first horns were plucked up by the roots. And behold, in this horn were eyes like the eyes of a man, and a mouth speaking great things. (Daniel 7:1–8; emphasis added)

MYSTERIES OF MT. HERMON — Will Rephaim (spirits of dead giants) return as THE ARMY OF ANTICHRIST?

In these verses, Daniel is shown present and future Gentile kingdoms on the earth, but then he sees a vision of the true King in the Divine Assembly as He enters the throne room, a scene that is echoed in Revelation 5. (One wonders if John and Daniel were present at the same future moment.)

As I looked, thrones were placed and the Ancient of Days [God the Father] took his seat; his clothing was white as snow, and the hair of his head like pure wool; his throne was fiery flames; its wheels were burning fire. A stream of fire issued and came out from before him; a thousand thousands served him, and ten thousand times ten thousand stood before him; the court sat in judgment, and the books were opened.

I looked then because of the sound of the great words that the horn was speaking. And as I looked, the beast was killed, and its body destroyed and given over to be burned with fire. As for the rest of the beasts, their dominion was taken away, but their lives were prolonged for a season and a time.

I saw in the night visions, and behold, with the clouds of heaven there came one like a son of man [Christ, the slain Lamb of God, arrives in heaven and is given the scroll as shown in Revelation 5], and he came to the Ancient of Days and was presented before him. And to him was given dominion and glory and a kingdom, that all peoples, nations, and languages should serve him; his dominion is an everlasting dominion, which shall not pass away, and his kingdom one that shall not be destroyed. (Daniel 7:1–14; emphasis added) 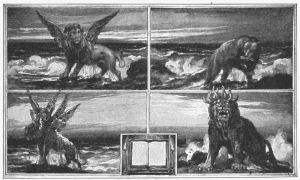 Here, we see the prophet Daniel taken to the throne of God and allowed to see the future coronation of Christ (Messiah) as the rightful heir to earth and ruler of humanity (and the universe) by His father, “the Ancient of Days.” And we see the divine council members are surrounding the throne as witnesses of this coronation.

Belshazzar, the king mentioned in the first verse of Daniel 7, was the eldest son of Nabonidus, the last king to reign over the Neo-Babylonian (Chaldean) Empire. His name means “Bel protects the king.” It’s unclear just which Bel (a generic term meaning “lord”) is meant here, but it most likely refers to Marduk; if so, Belshazzar’s very name disputed his absent father’s decision to remove Marduk as head of the Chaldean pantheon in favor of the moon-god, Sîn.

Prince Belshazzar never ascended the throne on his own, but ruled as regent during his father’s ten-year absence, during which Nabonidus served the moon-god in Arabia at the oasis of Teima. One assumes, therefore, that the “first year” of Belshazzar refers to the first year of his regency. Most historians put this at 553 BC. 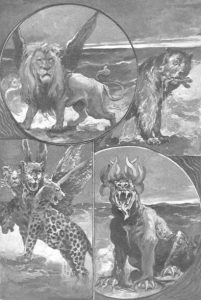 Now, with this in mind, let’s take a look at the vision itself. First, Daniel tells us that the dream occurs in the night. Night is obviously a time for sleep, but the hours of darkness are favorites for Fallen Realm activity. Oftentimes, people who suffer from night terrors do so between midnight and 3 a.m. Both of us have awakened many times during the night, only to notice that it’s three in the morning. And we’ve both been awakened periodically by an as-yet unseen “roof walker” who’s strolled across the top of our house at night, generally performing his mysterious activity near this same hour.1

Daniel also states that he experiences a “dream and troubling visions,” so it may be that the night brought him close to the spiritual battlefield, and that both sides—good and evil—vied for his attention. Of course, this is speculation, but as we’ll see in the next chapter, the Enemy certainly tried to stop the angel from delivering the visions recorded in chapters 10 through 12. Perhaps, the Enemy tried to prevent this one as well.

The vision of the beasts is a tantalizing one revealing four great, specific animals:

Understandably, Daniel is greatly disturbed by these visions, and he approaches one of the entities surrounding the throne. It’s possible that this is an angel, or it might be one of the cherubim who will later direct the apostle John to “come and see” the Four Riders of Revelation chapter 6. Whatever his identity, this heavenly being informs Daniel that the beasts he saw are four kings who will arise in the earth, but that these Gentile kingdoms are temporary, for it is the “saints of the Most High”—not human kings—who will rule forever.

Isn’t that amazing? Not only will Christ be crowned King of all kings, but we will rule with him! Hallelujah! 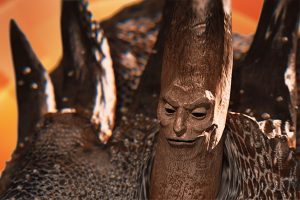 Daniel then adds this:

As I looked, this horn [i.e., the little horn that had arisen last and plucked up three of the ten] made war with the saints and prevailed over them, until the Ancient of Days came, and judgment was given for the saints of the Most High, and the time came when the saints possessed the kingdom. (Daniel 7:21; emphasis added)

The prophet is told that the fourth kingdom will be different; it will trample the earth beneath its feet. The ten horns represent ten kings, but these will give rise to an eleventh, one who is different from the others, and he will put down three kings. The saints of the Most High will be given into this king’s hand for “a time, times, and half a time.”

This phrase, “a time, times, and half a time,” is important, as it is generally interpreted as representing three and one-half years, or half of seven years. In other words, this future prophecy will be fulfilled during one-half of Daniel’s seventieth week. However, this is not the end. Praise God, dear readers, the enemy does not win!

But the court [the divine council as revealed in Revelation 5] shall sit in judgment, and his dominion shall be taken away, to be consumed and destroyed to the end. And the kingdom and the dominion and the greatness of the kingdoms under the whole heaven shall be given to the people of the saints of the Most High; his kingdom shall be an everlasting kingdom, and all dominions shall serve and obey him.

Here is the end of the matter. As for me, Daniel, my thoughts greatly alarmed me, and my color changed, but I kept the matter in my heart. (Daniel 7:26–28; emphasis added) 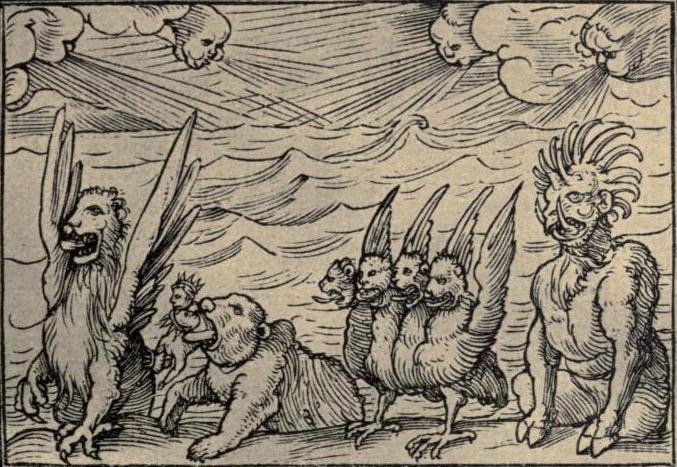 Looking back through the entire section, we can see how history fulfilled all the elements of Daniel’s vision.

[1] It sounds bizarre, but it’s true. Our home is too far from trees for the mysterious visitor to be a raccoon or a big cat, and besides, the footsteps are bipedal and much too heavy. The sound is that of a man walking across the roof.

[3] Adam Clarke. The Holy Bible: Containing the Old and New Testaments with a Commentary and Critical Notes to a Better Understanding of the Sacred Writings, Vol. IV (New York: Abraham Paul, 1825) p. 336.