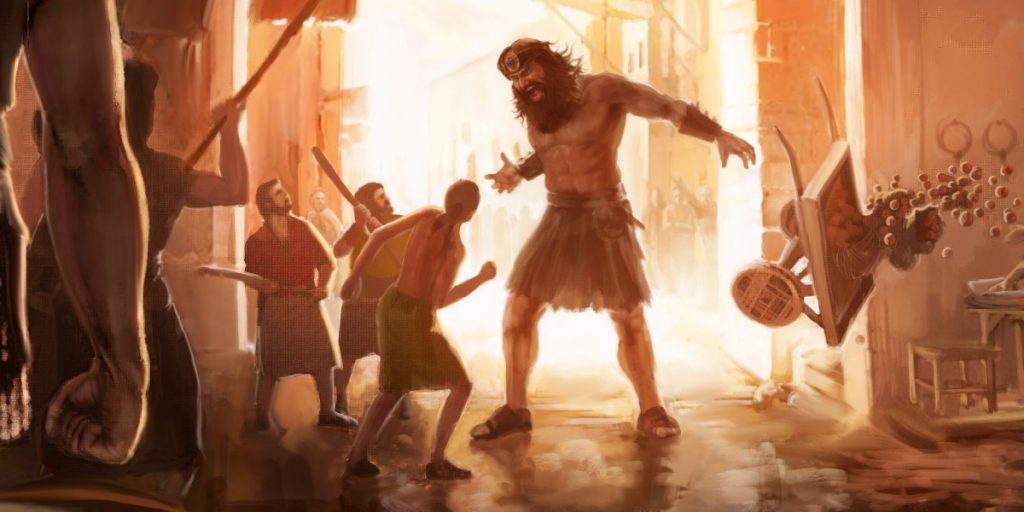 The word “apocalypse” is merely the transliteration into English of the Greek word apocalypsis, meaning “unveiling.” We get “Revelation” from the Latinized form. But before we discuss the infamous riders of Revelation 6, the Four Horsemen of the Apocalypse, we need context. Why are they riding? On whose authority? What kind of document are these seals attached to, and why is it important?

Revelation 5 opens with God sitting on His throne, holding a document in His right hand:

We can guess pretty easily who John meant by those in heaven or on earth—presumably, the prophet was talking about humans in the natural realm and the spirits in heaven. But who are those who exist “under the earth”?

Satan comes to mind, and it should be obvious why he wasn’t considered worthy. However, to the ancient world mind, there were other inhabitants of the spirit realm believed to occupy the space under the earth. John isn’t specific in identifying who, exactly, is under the earth, but it’s our view that these are the Rephaim spirits who plagued Israel at least from the time of Moses and probably much earlier.

Gilgamesh, a king of the ancient Sumerian city of Uruk, claimed to be two-thirds god.

Isaiah depicts them as kings of a bygone era now confined to Sheol, marveling that the rebel from Eden has been humbled like them.

Sheol beneath is stirred up
to meet you when you come;
it rouses the shades [the Rephaim] to greet you,
all who were leaders of the earth;
it raises from their thrones
all who were kings of the nations.
All of them will answer
and say to you:
“You too have become as weak as we!
You have become like us!”
Your pomp is brought down to Sheol,
the sound of your harps;
maggots are laid as a bed beneath you,
and worms are your covers. (Isaiah 14:9–11)

In his lamentation over the king of Egypt, Ezekiel depicts these long-dead leaders of the earth as denizens of the netherworld, although they appear to occupy a place of honor, separate from the run-of-the-mill dead:

They shall fall amid those who are slain by the sword. Egypt is delivered to the sword; drag her away, and all her multitudes. The mighty chiefs shall speak of them, with their helpers, out of the midst of Sheol: “They have come down, they lie still, the uncircumcised, slain by the sword.” […]

And they do not lie with the mighty, the fallen from among the uncircumcised, who went down to Sheol with their weapons of war, whose swords were laid under their heads, and whose iniquities are upon their bones; for the terror of the mighty men was in the land of the living. (Ezekiel 32:20–21, 27; emphasis added) 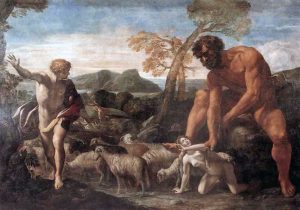 The term “mighty chiefs” in verse 21 is derived from the Hebrew ’êlê gibbōrîm. They’re located in the “midst of Sheol”; this is apparently a position of status, since the graves of the hated Assyrians “are set in the uttermost parts of the pit.” These mighty ’êlê appear to be the underworld small-g gods, venerated by the pagan neighbors of ancient Israel, called in the Ugaritic dialect the ilm ars (“gods of the earth”). This is confirmed by the Septuagint translation, which shows that Jewish religious scholars, three hundred years before the birth of Jesus, connected the “mighty chiefs” with the legendary giants of old, the Rephaim (i.e., the spirits of the ancient giants, the Nephilim):

And the giants will say to you, “Come in the depth of clamor! Than whom are you mightier? And descend and sleep with the uncircumcised in the midst of those wounded by swords!” (Ezekiel 32:21, Lexham English Septuagint)

Verse 27 is even more interesting. The first portion reads thus in Hebrew:

Some scholars believe that nofelim (“the fallen”) has a mispointed vowel and should read nephilim instead. That would transform the phrase into this:

They do not lie with the uncircumcised mighty ones, the Nephilim, who went down to Sheol with their weapons of war… (Emphasis added)

Once again, the translators of the Septuagint had this connection in mind:

And they were laid with the giants, who had fallen long ago, who descended into Hades with weapons of war… (Ezekiel 32:27, Lexham English Septuagint; emphasis added) 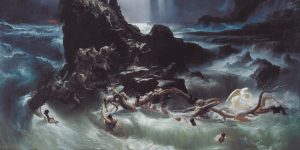 Rephaim are the spirits of the Nephilim destroyed in Noah’s Flood.

The “mighty chiefs” of verse 21 and the “mighty” of verse 27 are linked in Ezekiel’s mind with the ancient giants of Genesis 6, the Nephilim, who, after death, became the Rephaim spirits venerated by the pagan Amorites of Canaan. In turn, as we demonstrated in our book Veneration and in Derek’s previous book, Last Clash of the Titans, the Rephaim of Canaan became the ἥρως, transliterated as heros, of Greek religion—demigods like Herakles, Theseus, Perseus, and Dionysus.

This identification was well known to Jews of the first century AD, who’d been living in a world dominated by Greek and Roman religion and philosophy for about four hundred years by the time John wrote the book of Revelation. In addition, John was clearly familiar with the prophecies of Ezekiel; the destruction of Babylon the Great in Revelation 18 draws on the prophecy of the destruction of Tyre in Ezekiel 27. And since Ezekiel 28’s condemnation of the prince of Tyre is a parallel to Isaiah 14’s taunt of the king of Babylon, it’s clear that John knew the prophecies of Isaiah, too.

However, the point here is to demonstrate that even what may appear to be a throwaway line in Revelation 5:3 (“under the earth”) was based on John’s understanding of the spirit realm. Under the earth is where the demonic Rephaim lived, those who were worshiped as gods by the pagan Amorites, Canaanites, Phoenicians, Greeks, and Romans. And contrary to what most people in John’s day thought of Herakles, Dionysus, or the healing demigod Asclepius, not one of them was found worthy to open the scroll.

Continuing in Revelation 5, we encounter more supernatural entities that we need to discuss:

And between the throne and the four living creatures and among the elders I saw a Lamb standing, as though it had been slain, with seven horns and with seven eyes, which are the seven spirits of God sent out into all the earth. (Revelation 5:6)

The Lamb is obviously Jesus Himself, newly arrived in heaven. The concept of the Messiah as a sacrificial lamb was first expressed by Isaiah, who described God’s anointed one as “a lamb led to slaughter.” This is expressed numerous times in the New Testament, most directly by John the Baptist, who said, “Behold, the Lamb of God, who takes away the sin of the world!” (John 1:29). 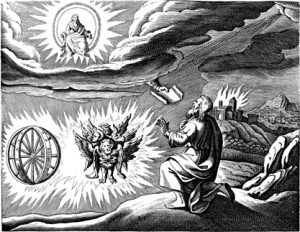 The “four living creatures” are another call-back to Ezekiel, this time to chapter 1 and the famous vision of the wheels within wheels that modern UFO enthusiasts like to mischaracterize as alien spaceships. As you’ve guessed, these creatures were cherubim. They were the throne guardians of the ancient world, and anyone reading Ezekiel’s description of his vision in the sixth century BC would have known immediately what he’d seen—a heavenly throne, not a flying saucer.

Cherubim stood guard at the entrance to Eden. Their wings shadowed the mercy seat on the Ark of the Covenant, upon which God was enthroned when He spoke to Moses in the tent of meeting. Two cherubim of olive wood, each fifteen feet tall and with a fifteen-foot wingspan, stood side by side in the inner sanctuary, with their outspread wings spanning the width of the chamber, guarding the very throne of God.

This is not a job for pudgy infants, winged or not. Cherubim are dangerous creatures who probably look like winged, bull-like sphinxes. You wouldn’t dare try to get past them to approach God Almighty without receiving permission—which speaks to the status of the Lamb in Revelation 5. He stands between the throne and the cherubim, at the right hand of God, a position of supreme authority that confirms His status as the Messiah and His identity as Jesus.

MYSTERIES OF MT. HERMON — Will Rephaim (spirits of dead giants) return as THE ARMY OF ANTICHRIST?

Now, let’s turn our attention to the two most important figures in Revelation 5—the One seated on the throne and the Lamb who arrives in verse 6. Clearly, John was describing God the Father and Jesus the Messiah. And the arrival of the Lamb in the throne room of God is an important clue to the timing of the opening of the seals and the ride of the Four Horsemen.

A futurist view of prophecy would typically be that the seven seals of Revelation chapter 6 have yet to be opened. But John is caught up to heaven in time to see the mighty angel ask, “Who is worthy to open the scroll and break its seals?” Then, in Revelation 5:6, a Lamb that looks “as though it had been slain” appears between the throne and the four living creatures—Jesus arriving in heaven after the Resurrection.

If we are still waiting for the first seal to be opened, then nearly two thousand years have passed with no one in heaven knowing where to find the Messiah! Does that seem logical? No, it does not. Especially when the Bible plainly tells us that Jesus, the Lamb, was at the right hand of God decades before John wrote Revelation.

But [Stephen], full of the Holy Spirit, gazed into heaven and saw the glory of God, and Jesus standing at the right hand of God. (Acts 7:55)

So, Jesus was in the throne room of God by about AD 35, when Stephen was martyred—more than fifty years before John was exiled to the island of Patmos. 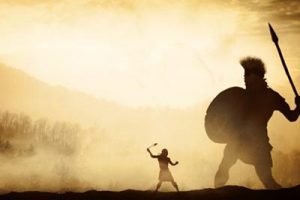 Our view is not typical of futurists. We believe that Revelation 5 shows us that Jesus took the scroll upon His arrival in heaven, forty days after the Resurrection, in or around AD 32. Therefore, the most logical interpretation of history is that He began opening the seals immediately after taking the scroll from the right hand of God.

It’s our belief that the Four Horsemen of the Apocalypse are riding now. In fact, they’ve most likely been loose in the world for nearly two thousand years, their effects felt by humans in waves of growing intensity.

Understand, the purpose of this section is not to get lost in the details of the history of the spirit realm on earth. Our purpose is to show the cultural context—what John had in mind—when he described the heavenly court of the unseen realm and the creatures who live there. This is not imagination. It’s not a film or a novel. The twenty-four elders and the cherubim who surround the throne are as real as Christ Himself. Therefore, it’s only logical to conclude that the Four Horsemen of the Apocalypse are likewise real entities.

Which begs the question: Who are they? We’ll explore that in the next few installments.