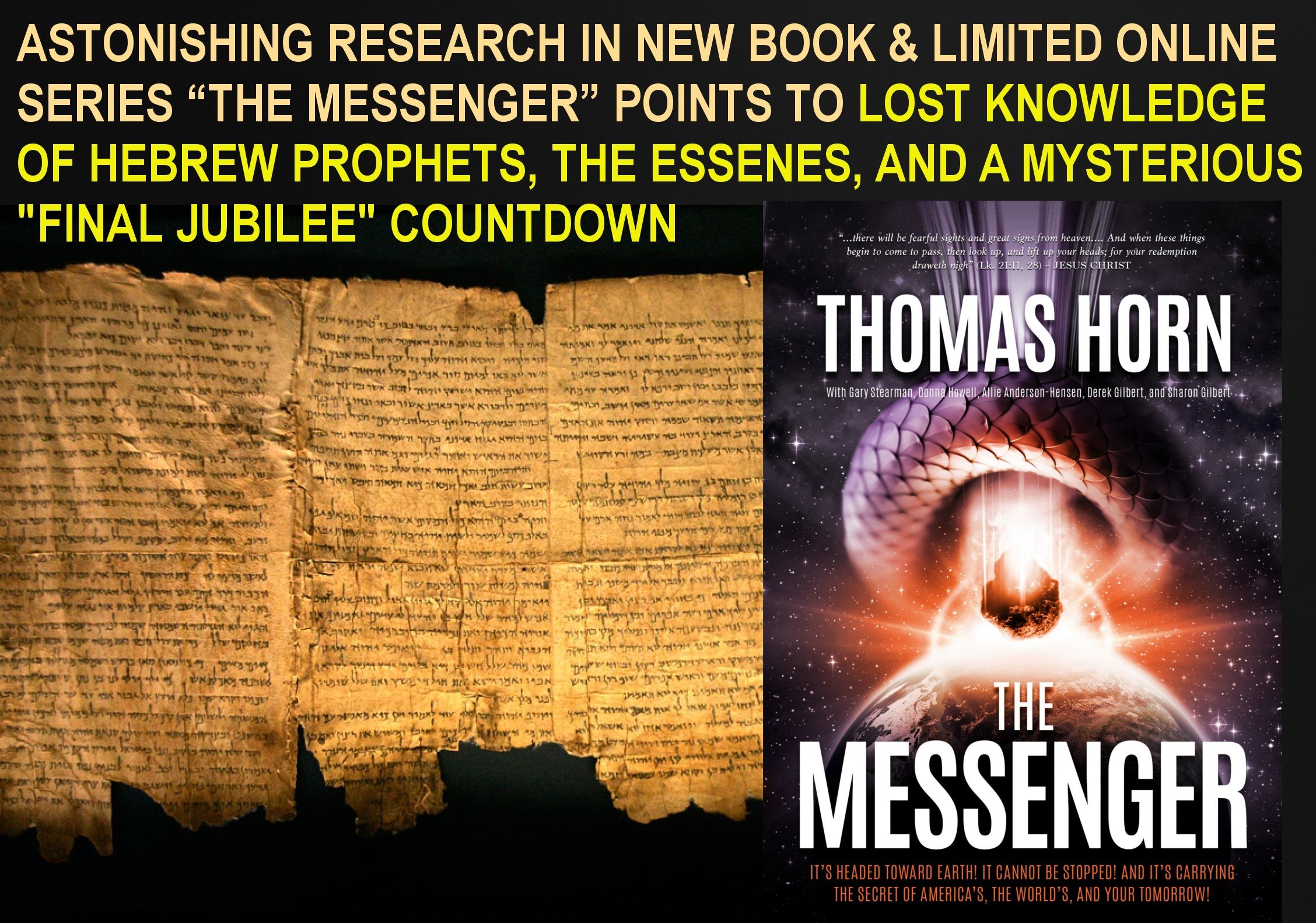 IT STARTS IN 2025: “IT” IS HEADED TOWARD EARTH! “IT” CANNOT BE STOPPED! AND “IT” IS CARRYING THE SECRET OF AMERICA’S, THE WORLD’S, AND YOUR TOMORROW!

PART 1: I Was Dying to See the Messenger

Many years ago, I (Tom Horn) died and woke up in heaven. Contemplating my surroundings, I wondered where I was, where I had come from, and why I had no memories of getting here—wherever here was.

At that moment, before it was shortly confirmed, I knew this was no dream; it was too vivid to be anything less than real. In fact, it felt realer than any previous reality I had known.

Abruptly I found myself standing somewhere before a spectacular pillar of light (or was it a throne?). It was so bright, so intense, and penetrating—glistening with vibrant streams of silver, blue, and gold emanating with the most unexplainable, yet awe-inspiring presence—that I could hardly keep my eyes open or my face toward the radiance.

I was exclaiming something, and didn’t know why I was saying it: “Please, Lord, don’t let me forget! PLEASE DON’T LET ME FORGET!”

How long had I been here and what was I talking about? Why was I so desperate to recall something I had obviously been told I would not remember? And how did I know I was standing before the Lord?

Suspended there like a marionette on wires, I somehow was aware that “memories” from moments before stood just beyond my ability to reckon them back into my conscious mind.

But I had known something, something about the future. I had seen it, and then I had been told I would not recollect the details. But why? What would be the purpose of that?

Something else had happened, too. Somehow I knew that a scroll of some kind had unrolled before me…with scenes of a future, my future, playing out on what looked like a silvery parchment. It had been as clear and as believable as if I were watching a movie, with rich depictions of a destiny, or a possible future, where something extraordinary and miraculous was taking place—a cinematic conveyance of a personal fate, a “potential existence” that had been downloaded into my subconscious mind, or soul, and then…for some reason…had departed my intellect. Had a revelation of some type been sealed inside me? Something for a later time?

My thoughts raced, and I started to repeat, “Lord, please, don’t let me forget,” but I stopped short, as just then, a deep, still, small voice countered, “You will not remember…and it is time for you to go back now.”

Then I heard a thunderclap…and found myself falling backward, drifting swiftly, as if I had been dropped out of an airplane window or let loose by some heavenly hands that had been holding me above, my arms and legs gliding up and down now against a cloudless sky.

As I fell, I gazed unblinkingly upward in amazement. The brilliance that had just been in front of me was moving rapidly away into the distance, yet I wasn’t afraid. A high-pitched whistling sound began rushing in around my ears, and I thought it must be the air carrying me aloft as I plummeted toward the earth. A moment later, I watched as the oddest thing happened: The roof of my house literally enveloped me as I passed effortlessly through it, and then it felt as if I had landed on my bedroom mattress with a THUD!

I sat straight up, took a desperate, shuddering, deep inhalation, and slowly let it out, realizing that something extraordinary had occurred. Wherever I had been, whatever I had seen, I was back now to the so-called real world, and this material substance straightway felt far less authentic to me than the other place I had been.

HISTORY-CHANGING SERIES “THE MESSENGER” STARTS IN NEW SKYWATCH TV STUDIO NEXT WEEK — CHECK IT OUT!

It was the middle of the night, and I sat there for a few seconds, possibly in shock, trying to determine what had happened.

I could feel my chest burning…then I heard something.

Sobbing…right next to me…my beautiful young wife, Nita, with her head resting on her hands.

As my eyes adjusted to the darkness, I found her isolated stare. She looked as if she had been crying desperately, and she had an unfamiliar expression conveying what I somehow already understood: We both had experienced something far more irregular than we ever could have prepared for.

It took a while for her to collect herself, but once she did, she tearfully described how she had awakened to find me dead. No pulse, no breath, no heartbeat. I had been cold to the touch—and not just for a few seconds, either. I had remained in that condition for approximately fifteen minutes while she had screamed for me to wake up, pounded on my chest, and attempted CPR.

We didn’t have a phone in those days and no close neighbors, and since it was in the middle of the night, Nita had been unsure of what to do. She was about to try pulling me outside to the car to take me to the hospital when I jerked up, took in a deep breath, and looked at her.

For the reader, no matter how incredible the narrative above seems, this really did happen to me a long time ago. Later, and since then, I have understood why God allowed my wife to wake up to find me in that condition. Without her eyewitness account that night, uncertainties about the supernaturalism of the experience undoubtedly would have crept into my mind over the years. Also, the fact that I had been dead for a significant period of time, not breathing and therefore not taking in oxygen, yet experiencing no brain damage (though I’m sure some would argue otherwise) also attested to the preternatural quality of the event.

But why would God show me something and then not allow me to remember it? What would be the point of that? I can tell you that this was the question pressing me in the days immediately following the event, and in my youthful naïveté and impatience, I first went about trying to find answers to that mystery in the wrong way. I learned a valuable and biblical lesson as a result. In fact, that early mistake is why most haven’t heard this story until now.

What happened next was this: A couple of days after my death and return from “over yonder,” I told the pastor of our local church that I had an important question for him. In private, I recounted the events of earlier that week and probed what it could mean. “Why would God show me something, then tell me I wouldn’t remember the vision?” I had inquired earnestly. The pastor’s response was shocking to an honest and sincere young Christian man like myself. Basically, he offered that I had probably eaten too much spicy food, or had accidentally been poisoned, and was therefore delusional or simply had a vivid dream.

Of course, I wasn’t yet familiar with such admonitions as, “Give not that which is holy unto the dogs, neither cast ye your pearls before swine, lest they trample them under their feet” (Matthew 7:6). I’m not saying that my pastor back then was a dog, you understand, but that this was a lesson I wouldn’t soon forget about sharing sacred things with those who haven’t had similar supernatural experiences and therefore can’t appreciate or understand the otherworldly significance. In fact, besides my closest friends and family, from that day forward, I kept the event (and what I would soon understand about its measurable implications) a secret. Then, just a few years ago, well-known television personality Sid Roth asked me to repeat the story on his syndicated program, It’s Supernatural. Because Sid, unlike some preachers, actually BELIEVES in the miraculous, I agreed that it was time to tell at least a part of that history—albeit, as legendary radio broadcaster Paul Harvey used to ponder, what was the rest of the story?

After the disappointing experience following my pastor’s less-than-enthusiastic response to my question, I struggled to make sense of what had obviously been an extraordinary incident. I prayed daily, seeking understanding, and during this same period (undoubtedly God had all this timing in control from the very beginning), I happened to be reading the Bible from cover to cover for the first time in my life. I had made it to the oldest book of the Bible, Job, when, one day, my eyes suddenly fell upon Job 33:15–17. The Word of God dramatically came to life in what some charismatics might call a rhema moment, a time when the Scripture went from being ink on paper to becoming the living Word of God! The text that instantly conveyed the dynamic truth behind what had happened to me that fateful night read:

In a dream, in a vision of the night, when deep sleep falleth upon men, in slumberings upon the bed; Then he openeth the ears of men, and sealeth their instruction [within them], That he may withdraw man from his purpose, and hide pride from man. (Job 33:15–17)

Though I was a very young and inexperienced believer, I clearly understood what this text was saying to me. Like the apostle Paul who could not tell whether he was “in the body…or out of the body” when he was “caught up to the third heaven” (2 Corinthians 12:2), or like Peter who experienced a “trance” (Greek ekstasis, [see Acts 10:10; 11:5; 22:17] the thrusting of the mind out of its normal state where it is transported as it were out of self, so that in this rapt condition the individual “is wholly fixed on things divine” and “sees nothing but the forms and images” shown to them by God)[i] God, on that momentous night, had taken me to a heavenly place and sealed “instructions” within me. These directions would be there when I needed them during life, as they were like a roadmap that the Holy Spirit would “quicken” when, at different times, I needed guidance or information. Nevertheless, I was not to remember these details ahead of time; otherwise, I might be drawn away into my “own purpose” and lifted up in “pride,” according to this passage in Job.

In other words, if, as a young believer, I had seen the ministries that God would later allow Nita and me to participate in—from pastoring large churches to owning a Christian publishing house and syndicated television ministry, to speaking at major conferences as a best-selling author, or any of the other opportunities He would give us permission to be associated with—I very likely would have made two huge mistakes. First, I would have immediately aimed at these later ministries and started working to try to make them happen—all without the benefit of the struggles, trials, setbacks, side roads, and experiences that are necessary for “seasoning” and (hopefully) qualifying one to eventually operate in them (thus God “withdrew me from my purpose”). Second, I would have been tempted by pride to think of myself as more than I should have as a young man, if I had seen myself ending up in high-profile ministries. So God, in His benevolence, also “hid pride” from me by keeping the revelations sealed until the appropriate times.