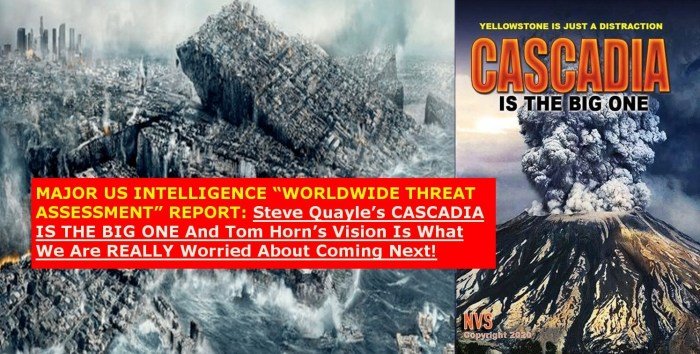 The Sun is reporting how Russia is set to carry out the first test of its ‘doomsday’ nuke drone – said to be capable of destroying America with a nuclear earthquake. Preparations to test the underwater ‘Poseidon’ drone aboard a nuclear-powered submarine named Belgorod are already underway, according to Russian newspaper Izvestia. It is understood that the Russian Navy is due to secure about 30 Poseidon unmanned underwater vehicles that can be fitted with both conventional and nuclear weapons, enabling them to hit a wide range of targets – and they’ve already been successfully tested from a diesel-driven sub, Sputnik reports. City-destroying earthquakes are caused when the planet’s tectonic plates grind together along fault lines, and the Cascadia Subduction Zone is a first strike target from Russia. Why? Watch important video below.

FREE! GET DR. THOMAS HORN’S BOOK & DVDS FREE WITH NEW DOCUMENTARY FROM STEVE QUAYLE “CASCADIA IS THE BIG ONE”