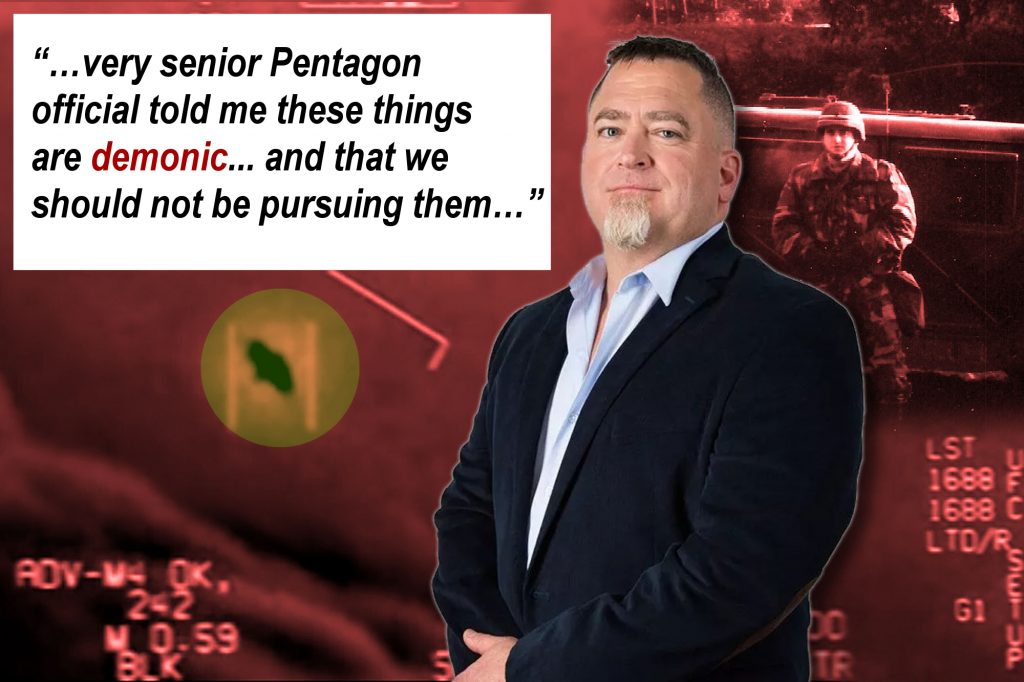 After watching the astonishing interview with Luis Elizondo below and listening carefully to what he states about the Government’s knowledge of demons connected to UFOs, I contacted senior Pentagon analyst LTC Robert Maginnis for a comment and he sent me this related excerpt from his new book GIVE ME LIBERTY, NOT MARXISM in response:

Do you believe in unidentified flying objects (UFO) and/or demons?

Evidently, there are those at the Pentagon who are now believers in UFOs, even though our best science can’t explain them. On September 8, 2004, off the coast of San Diego, California, US Navy Commander David Fravor, an F-18 pilot, encountered what he described as a “Tic Tac” (mint)-shaped UFO, which he believed committed an “act of war.”

Commander Fravor was dispatched from his aircraft carrier to investigate radar anomalies he described as “like nothing I’ve ever seen,” an object able to turn on a dime and make itself invisible to radar.

Fravor said the flying conditions were perfect—crystal clear—that day, and the object he saw was watched by four other trained observers. When he tried to fly close to the object, Fravor said, it accelerated so quickly, it was gone in half a second.

Fravor aimed his radar at the UFO. He explained, “The radar is smart enough that when the signal comes back if it’s been messed with, it will tell you—it will give you indications that it’s being jammed…it’s being jammed into about every mode you can see…you can tell it’s being jammed.”

Luis Elizdono [featured in the video below] was a former military intelligence official and previously led the Pentagon’s Aerospace Threat Identification Program (ATOP). He tried to explain the unexplainable in an op-ed for Fox News.

Mr. Elizdono said in 2004 the USS Nimitz (an aircraft carrier) launched top gun-trained fighter pilots—including Commander Fravor—who engaged with and attempted to intercept “something that could only be described as extraordinary.”

The object the pilots pursued “defied all logic and our current understanding of aerodynamics…the technological feat they encountered was further verified by the impressive Aegis AN/SPY-1 radar, America’s premiere system at the time, and even gun camera footage and sonar systems from submarines accompanying the carrier.”

The ATOP tried to decode the mystery object. Further, such incidents, according to Mr. Elizdono, “continued for at least a decade later and involved other carrier battle groups around the world.”

The Pentagon’s ATOP was “utterly unprepared to address something that can easily out-maneuver our best-in-class pilots, in our very own tightly controlled airspace,” wrote Mr. Elizdono.

Then he said, “Our leaders need to have the courage to ask the question, did a foreign adversary just leapfrog ahead of the U.S.? Or is this something else?”

Just because we don’t understand something doesn’t mean we ignore it and conclude that it doesn’t exist. That takes me back to the unexplained Great Reset co-conspirators, Satan and his army of demons. For the Christian and others who believe in the unseen realm, Satan is very real and working his evil today.

Juxtapose what the Scripture says in 2 Kings 2:11 (KJV) with the above UFO account. That verse states: “And it came to pass, as they still went on, and talked, that, behold, there appeared a chariot of fire, and horses of fire, and parted them both asunder; and Elijah went up by a whirlwind into heaven.” A writer 2,500 years ago describes something he saw using objects he understood—“chariot of fire, and horses of fire…and a whirlwind into heaven.” Just perhaps that’s not much different from Commander Fravor’s “Tic Tac” that was “gone in half a second.”

As Mr. Elizdono asked, “Or is this something else?” Indeed. There are many things we can’t explain, much less sense, and it would be incredibly naïve to suggest, as some even today claim, that there is nothing, no powers, beyond our senses and the reach of science. At a minimum, we can say that angelic forces, good and bad, use technology that is far superior to anything known on the earth. We are not talking about disembodied spirits that are armed with simple swords; rather, the spiritual realm enemy is immeasurably equipped with sophisticated technology with which they will deceive most of the world.

The truth of the matter is the unseen realm is very real and is engaged in events all over this globe. The battle firing up the heavens is very real; Satan is very present and is partnering with earth-bound dark princes…

JUMP FORWARD IN INTERVIEW BELOW TO 15-MIN MARK, WATCH WHAT FORMER D.O.D. INTELLIGENCE OFFICER LUIS ELIZONDA ADMITS ABOUT THE PENTAGON’S CONCLUSIONS ON DEMONS AND UFOS 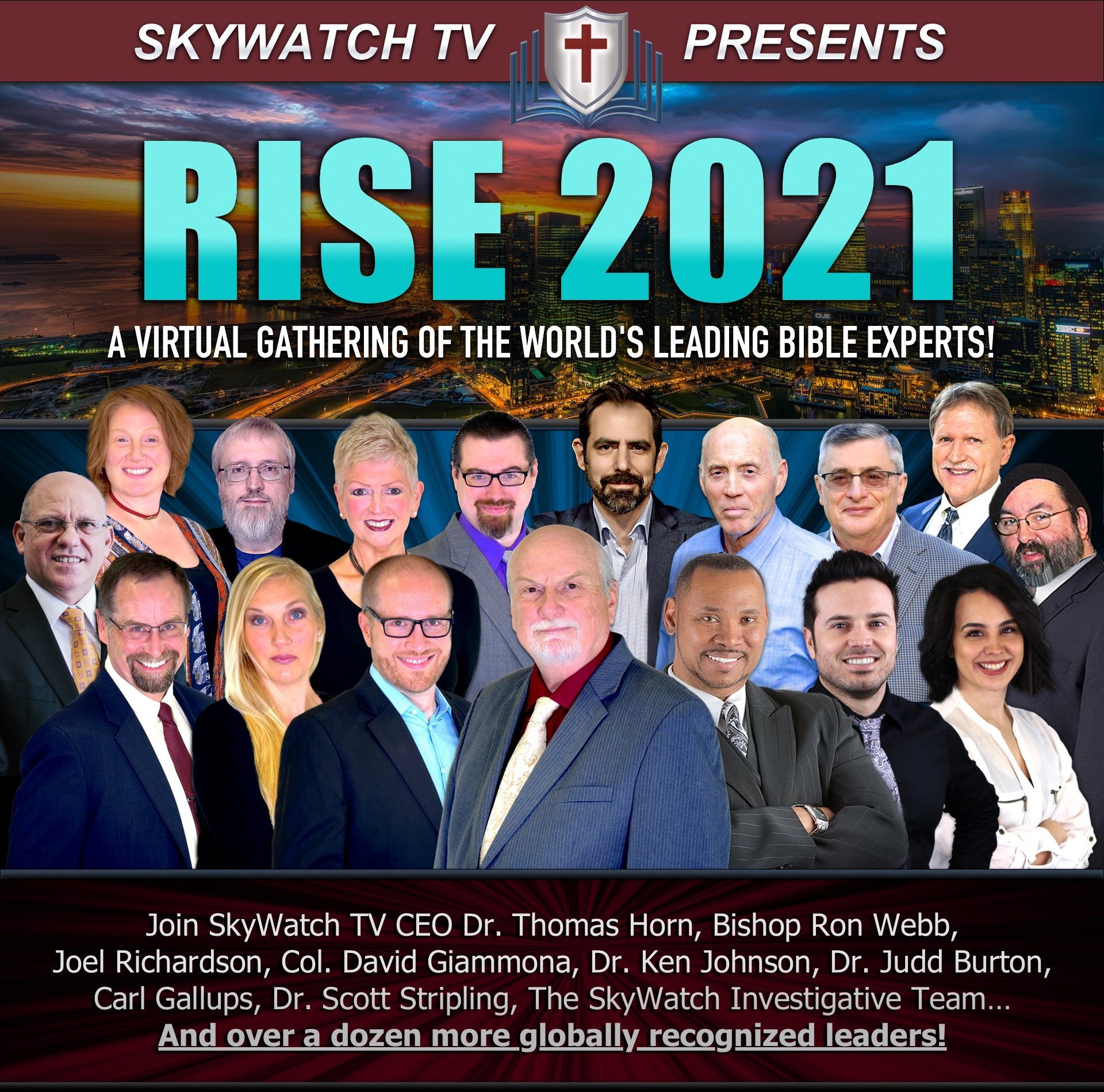