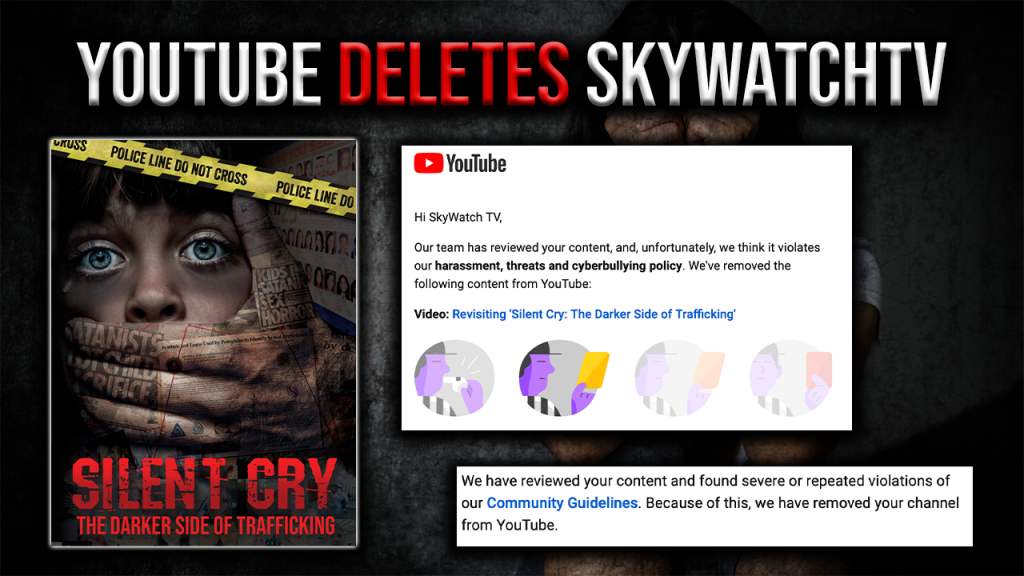 PLEASE REPOST AND SHARE FREELY WITH EVERYONE YOU KNOW!

Disturbingly, the ban was prompted by SkyWatchTV’s network television broadcast for the week of May 30 through June 5 about the multiple award-winning documentary on child sex trafficking, Silent Cry.

The film, written and directed by Josh Peck, received three awards at the 2021 Telly Awards. It was one of five productions to receive a gold People’s Telly from among more than 13,000 entries.

Incredibly and without warning, YouTube deleted the highly popular account over an expose on child sex trafficking and occult ritual abuse, which they deemed a violation of its community guidelines.

“I’m disappointed but not surprised,” said Derek Gilbert, host of SkyWatchTV’s weekday news analysis program Five in Ten. “It’s YouTube’s playground, so they set the rules. We get that. But to justify deleting our channel for ‘threats and cyberbullying’ against child rapists and sex traffickers is absolutely beyond the pale.”

The documentary film’s producer, Josh Peck was equally disturbed. “It is unfortunate that we now live in a world where trying to defend and rescue sexually abused and tortured children is labelled ‘cyberbullying,’ ‘harassment,’ and a threat. This dark part of the world used to lurk below the surface, preying on people from the shadows, and remaining hidden by relying on the ignorance of the rest of the population. Those days have passed. Now the largest company in the world has decided the information in a recently uploaded SkyWatchTV video, entitled “Revisiting ‘Silent Cry: The Darker Side of Trafficking,’ is so harmful that the entire channel must promptly be done away with along with you, its hundreds of thousands of subscribers.

“I have reason to believe YouTube taking this stand AGAINST sexually abused children, citing Silent Cry ‘Harassment’ was a coordinated effort done outside their own guidelines,” Peck continued. “Usually, in order for a channel to be deleted, it must receive three ‘strikes.’ Our SkyWatchTV channel had no strikes until this morning. When I appealed, they promptly denied reinstating our channel. Here is what I sent to them:

Of course the only people the documentary is possibly “threatening” (if we hold a very loose definition of that word) are the sexual abusers and pedophiles themselves. By putting out accurate information regarding child sex trafficking, we are threatening their horrifying business, their abominable trade, and their evil and depraved lusts. Quite simply, we are making it more difficult for pedophiles to abuse children. Why YouTube would remove our content and thus side with the abusers is anyone’s guess. We certainly aren’t getting any clear answers from YouTube themselves.

And in case you are curious, you can watch the episode YouTube took such severe issue with on our new Rumble account here: skywatchtv.com/videos/revisiting/

Another way to view the video is with our app at skywatchtv.com/mobile-app/

If you are one of the hundreds of thousands deleted in our YouTube channel, please subscribe to our new Rumble account to continue viewing our multiple programs here: Rumble.com/c/SkyWatchTV

While we had hoped YouTube would do the right thing and reinstate our channel, we also know this level of censorship across all major social media platforms is growing and is only going to get worse for conservatives and people of faith.

“Censorship by big tech is one of the greatest threats to the principles of democracy that we have seen in decades. This is done solely for the purpose of controlling information and preventing the free discussion of ideas among their fellow citizens,” Edward Furton, an ethicist at the National Bioethics Center warned recently.[i] “Unfortunately, this will become increasingly common until our political leaders gather up the courage to enact legislation that will protect the free expression of ideas.”

This is why it is more important than ever that you join us in this war. There is no better time than right now to support SkyWatch TV and/or to order Silent Cry, leave a review on Amazon and IMDb, and continue showing the world that we will not back down to intimidation. Every penny of profit from this film goes directly to support the Whispering Ponies Ranch, a 280-acre youth therapy ranch in Missouri that employs no-cost miniature equine assisted activities as well as full food and lodging amenities (such as food services, camping elements, climbing walls, fishing, bicycling, hiking trails, swimming, low and high course elements, gymnasium, nature adventure and more) to help bring positive mental, physical, and emotional benefits to children rescued from trafficking and abuse.

Every year, more than 3.2 million children in America are sex-trafficked, abused, abandoned, or neglected. One in seven Americans are sexually abused as children. Tragically, 1,500 to 2,000 children die each year at the hands of their caretakers. And the remainder are often disregarded or experience a combination of these abuses. But there is hope for many of these victims through the partnership that Whispering Ponies Ranch (WPR) holds with the Royal Family Kids Camps, Teen Reach, and other specialized national organizations. We will stand up for these children, even if the largest companies in the world try to stop us. This is our modern David and Goliath moment. As people of faith, we can band together, protect the children, and show the world what we can do despite the tech oligarchy’s war against free speech and persecution of conservative values and Christianity.

For the past two decades, SkyWatch TV and it’s publishing house Defender have championed the cause of victims while boldly speaking out on a variety of cutting-edge topics, accomplishing the essential task of fearlessly reporting the truth–something the Marxist oligarchs will not give up on deplatforming and destroying.

Of course, this is prophetic, as Jesus warned:

“Blessed are ye, when men shall revile you, and persecute you, and shall say all manner of evil against you falsely, for my sake. Rejoice, and be exceeding glad: for great is your reward in heaven: for so persecuted they the prophets which were before you” (Mt. 5:11-12).

So, in the natural sense, the deck is stacked against SkyWatch TV, and not just because of attacks meant to silence us. We are also opposed by hidden powers described in the Bible as principalities, powers, the rulers of the darkness of this world, spiritual wickedness in high places (see Ephesians 6:12). Additionally, we must admit, there are no billionaires underwriting the substantial costs involved with our Christian broadcasting efforts and support of our charity, WPR, and so the challenge is increasingly daunting.

But you can help us weather the storm and continue in the good fight to preach truth, set captives free, and heal the broken hearted by giving as much as you can to support us in this critical hour. We thank you in advance for any support, prayers, and encouragement you can give. Please know that we are committed to continuing for as long as we can.

ALSO SEE: Why These Kids Need God And Summer Camp At Whispering Ponies Ranch This Year More Than Ever

SkyWatchTV is a Christian media ministry based in the Missouri Ozarks. Its weekly flagship program, SkyWatchTV, is hosted by Joe Horn and carried on multiple national and international Christian television networks. Through Roku and Apple TV, SkyWatchTV’s programming can be viewed worldwide, and its free mobile app features all of the ministry’s video content, cutting edge news updates, and a schedule of upcoming events.

SkyWatchTV also produces the daily new analysis program, Five in Ten, and will soon launch several other syndicated programs: Simply His, a women’s program featuring Katherine Horn, Donna Howell, Allie Henson, and Nita Horn; Back to Eden with a panel of health experts; and The Bible’s Greatest Mysteries, hosted by Derek and Sharon Gilbert.