GIVE ME LIBERTY, NOT MARXISM—PART 3 OF 4: MARXISM, SOCIALISM, EVIL SUPERNATURALISM 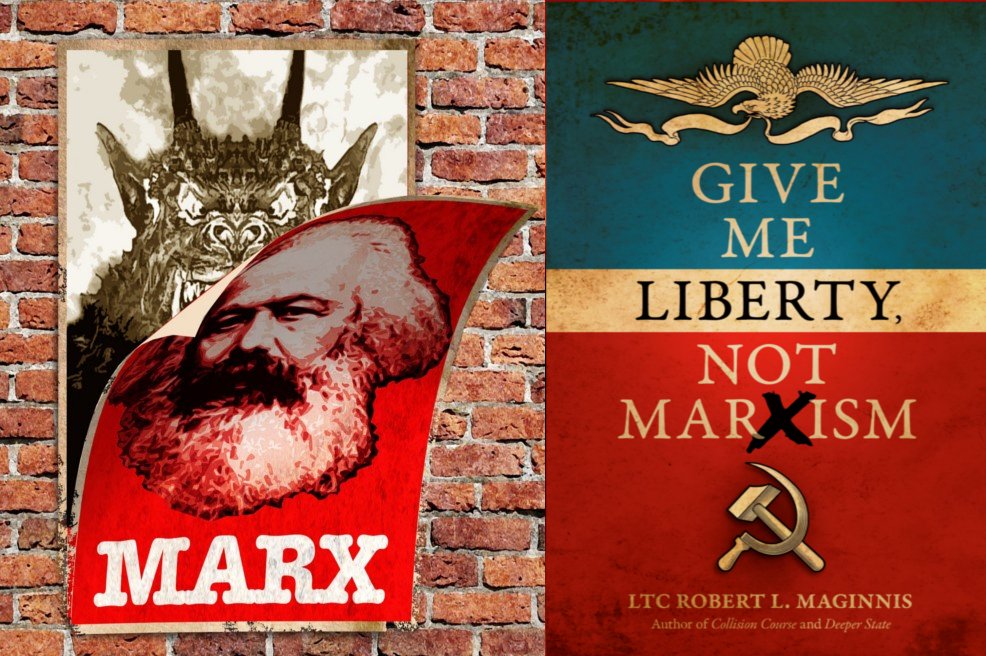 Editor’s Note: This limited series is adapted from the 2021 Defender book by Lt. Col. Robert L. Maginnis, Give Me Liberty, Not Marxism.

The American people will never knowingly adopt socialism. But, under the name of “liberalism,” they will adopt every fragment of the socialist program, until one day America will be a socialist nation, without knowing how it happened.[i] —Norman Thomas, six-time presidential candidate for the Socialist Party of America

The 2020 election was a petri dish for socialism, and it came up short. A post-election analysis by Representative Abigail Spanberger (D-VA) found that Democrats shouldn’t say the word “socialism…ever again.” Why? It was a major political loser in the 2020 election cycle, according to Spanberger, which, evidence suggests, was one of the reasons Joe Biden lost in Florida and a major disappointment for so-called Democratic socialists like Senators Elizabeth Warren (D-MA) and Bernie Sanders (I-VT), both of whom celebrated their socialist credentials during the campaign and promised more of the same for America’s future.[ii]

Bernie Sanders explained his perspective for his loved socialism: “To me, democratic socialism means democracy.”[iii] But to conservatives like former President Ronald Reagan, “Socialism only works in two places: heaven where they don’t need it and hell where they already have it.”[iv]

Most every astute American knows that socialism earned considerable press during the 2020 election cycle, but according to veteran pollster George Barna, that support didn’t come from many Christians. He found that 98 percent of Americans who support socialism reject the biblical worldview. Barna explained, “The 2020 election is not about personalities, parties, or even politics. It is an election to determine the dominant worldview of America.”[v]

What is socialism? It is the realization of the social and economic theory attributed to Karl Marx that embraces state ownership of all property and the means of production. This idea of the sharing of wealth in society theoretically results in a classless society where everyone is equal, and the distribution of the means production is the chief characteristic. Not surprisingly, it is in direct opposition to capitalism.

Socialism depends on Marx’s wrongheaded assumption about life based on the Hegelian dialectic, which is explained in the earlier section on Marxism—thesis, antithesis, synthesis—which is a social evolutionary theory much like Charles Darwin’s evolution of the species. The problem for Marx and socialism in particular is that, with hundreds of years of empirical evidence, it’s capitalism, not socialism, that works. Economist Paul Samuelson observed, “As a prophet Marx was colossally unlucky and his system [socialism] colossally unuseful.”[vi]

Socialism is not just “unuseful,” as Samuelson wrote, but it is dangerous because it leads to big government and, as F. A. Hayek, a twentieth-century British-Australian philosopher, observed, centralized and big government planning inevitably leads to dictatorship. A simple study of socialist leadership over the past century conclusively demonstrates that such leftist authorities promise freedom but end up delivering only misery and tyranny.

The evidence is conclusive: Socialism is an abject failure across time and continents from the Marxism-Leninism in Soviet Union, Maoism in China, so-called democratic-socialism in Sweden to national socialism in Nazi Germany. Across time, socialists who survived were forced to consistently compromise Marx’s original vision by embracing aspects of capitalism such as economic zones and foreign investment, to name just a couple.

The best-known socialist experiment, the Soviet Union, couldn’t be saved by Mikhail Gorbachev who tried perestroika (restructuring) and glasnost (openness). Those efforts ended with the lowering of the Soviet hammer and sickle (the Soviet’s national flag) for the last time on Christmas Day 1991. Much the same outcome happened in communist China in the late 1970s when Deng Xiaoping compromised Maoist ideas of socialism to accept more capitalist ways such as enterprise and foreign investment. Unfortunately, the communist Chinese were sufficiently flexible to adjust their adherence to Marxism in order to maintain control of that nation, unlike their communist Russian peers.

Socialism also long ago failed in America when Robert Owen (1771–1858), an English philanthropist, invested much of his fortune in the experimental socialist community at New Harmony, Indiana. That nineteenth-century experiment lasted about two years before Owen returned to London.[vii]

Unfortunately, empty socialist promises still inspire people today in spite of a record of total failure across the globe. Specifically, socialism manifests itself in some Western countries where there is increased reliance on big government and centralized programs such as universal healthcare and massive social welfare programs. These policies are key to modern socialism that advances the view that communal sharing helps society prosper.

Perhaps it isn’t surprising that some socialist ideas regarding healthcare, climate change, free education, and government assistance for the needy all poll well today, especially among American Millennials (born 1981–1996), who tend to favor socialism thanks to a sympathetic mainstream media and the influence of the public educational establishment that more often than not advocates for leftist philosophies. By contrast, older-schooled Baby Boomers (born 1946–1964) tend to favor capitalism, a result of their histories—and not surprisingly, these Americans are often labeled by Millennials as indifferent to the needs of the common man for their opposition to socialist ideas.

Those differences in view across the generations beg the question: Just what makes someone embrace socialism? Perhaps part of the attraction is a result of personality or youthful idealism. After all, some young people who favor socialism tend to be very personable themselves and feel good about sharing and collaboration, as opposed to being competitive. They tend to believe the greatest good comes from self-sacrifice for the common good, and they aspire to redistribute resources until everyone is equal, a reflection of Marx’s well-known exhortation: “From each according to his ability, to each according to his needs.”[viii]

Our public educational establishment tends to endorse socialism as well. After all, who hasn’t heard true accounts of the socialist-leaning teacher, school administrator, and/or coach who promotes equal outcomes for all the children on sports teams? They don’t keep score and don’t like labels like “winner” or “loser.” That’s why every member of the team gets a participation trophy at the end of the season, because it’s all about everyone feeling equal, no matter one’s talents and contributions.

At the aggregate economic level, the socialist is passionate about the equal distribution of financial resources and he or she becomes quite upset when there are disparities in society whereby some people are obviously very wealthy while others live a meager existence. The socialist expects the strong arm of government to rectify those disparities and are upset when that doesn’t happen.

The extreme version of socialism is communism, which is profiled in the next section of this chapter. However, for now, consider that these people, according to one author, are an exaggerated version of the socialist person profiled above, but with a vengeance. The communist’s psychological profile is best described by terms like “defeatism,” “deceptive hypocrisy,” “low self-esteem,” and by the tendency to be delusional about their theoretical notion of equality.[ix]

These psychological characteristics are on full display most every day in the halls of the US Congress. Leading socialist activists like US House of Representatives Congresswoman Alexandra Ocasio-Cortez (D-NY), a member of the Democratic Socialists of America (DSA), earns considerable attention and support, especially among socialist-leaning younger Americans. She calls for government ownership of industries such as railroads and coal mines, and would “democratize” private businesses to give the workers total control, a Marxist idea. Not surprisingly, the DSA National Steering Committee called for the “democratization of all areas of life, including but not limited to the economy.”[x]

Even though socialism may still not be an integral part of the Democrat Party’s public platform, some of those closely associated with the party, like Senator Sanders, a hard-core socialist, push the party to implement socialist policies, albeit gradually—and, like what Norman Thomas said, they will press that agenda as they did with Joe Biden “until one day America will be a socialist nation, without knowing how it happened.”[xi]

Below is socialism’s worldview followed immediately by a biblical perspective of this ism.

First, socialism is an expression of Marxism, a belief that the material universe is all that exists or, said otherwise, it is an atheistic belief system. It places total trust in the evolution of man to create a utopia, and asserts that once we die, there is no afterlife.

Christianity was a favorite target of Marx because of its concept of a fixed human nature. Marx’s disciples, especially Vladimir Lenin (1870–1924), waged a campaign of terror against Christian churches in Russia, where he executed priests and violated nuns. For socialists like Lenin, these horrors were a necessary part of the Marxist-inspired and necessary class warfare.

Second, socialism, in spite of protests from its proponents, is a kind of faith system like most religions. Like all religions, socialism answers three key questions about ultimate reality, the nature of mankind, and what man can achieve in this life. The socialist worships his/her god, Marxist socialism.

Third, the socialist is totally focused on human existence. That doesn’t mean that socialists who have a faith in God don’t perhaps embrace aspects of true socialism, but it is an issue they must somehow hybridize.

Fourth, socialists believe in the evolution of man from the animal species, and their focus is on human life in this world. There is no hereafter, says the socialist. Therefore, they exclusively focus on the survival of the human race and do whatever is necessary to ensure that the species thrives.

Fifth, socialism embraces moral relativism because it doesn’t believe in absolute moral laws that transcend mankind (God). However, socialists do recognize the need for moral rules imposed by their political masters to prevent chaos.

Sixth, socialism advocates central control of the economy with the goal of equality across the entire population. That means the government is expected to take resources from those who earn it and give it to others who need it. They do this by creating a centralized authority that plans the production and distribution of all products and services.

Seventh, socialists accept centralized political control in order to enforce “equality” across society, which translates into the need for a ruling class to make and enforce the rules. The result in every case of socialism is that the ruling class becomes some form of dictatorship with all power vested in a single political party or a strong-man dictator like China’s President Xi Jinping and the ruling Chinese Communist Party.

The consequences of socialism are tragic. Millions of people living today can testify to the ravages of socialist tyrants like those in China. Obedience to the will of the party is expected, with no alternative.

At that [socialist] meeting I learned that when a man was informed of the wish of the Party he submitted, even though he knew with all the strength of his brain that the wish was not a wise one, was one that would ultimately harm the Party’s interests.[xii]

I doubt whether in any country in the world—not even in Hitler’s Germany—have the mind and spirit ever been less free, more bent, more terrorized and indeed vassalized—than in the Soviet Union.” Gide said, “The Soviet Union has deceived our fondest hopes and shown us tragically in what treacherous quicksand an honest revolution can founder.[xiii]

Even the American journalist Louis Fisher, who once boasted of Soviet Union’s advances, provided a stark picture of that regime:

Eighth, socialism is not biblical but a Marxist method of execution and runs contrary to Bible teachings. Consider key areas where socialism and Christianity diverge, in spite of the fact that, according to a George Barna poll, many Americans think Jesus was a socialist (24 percent) as opposed to a capitalist (14 percent).[xv]

UP NEXT: How Socialism Is Antithetical to Christian Teachings