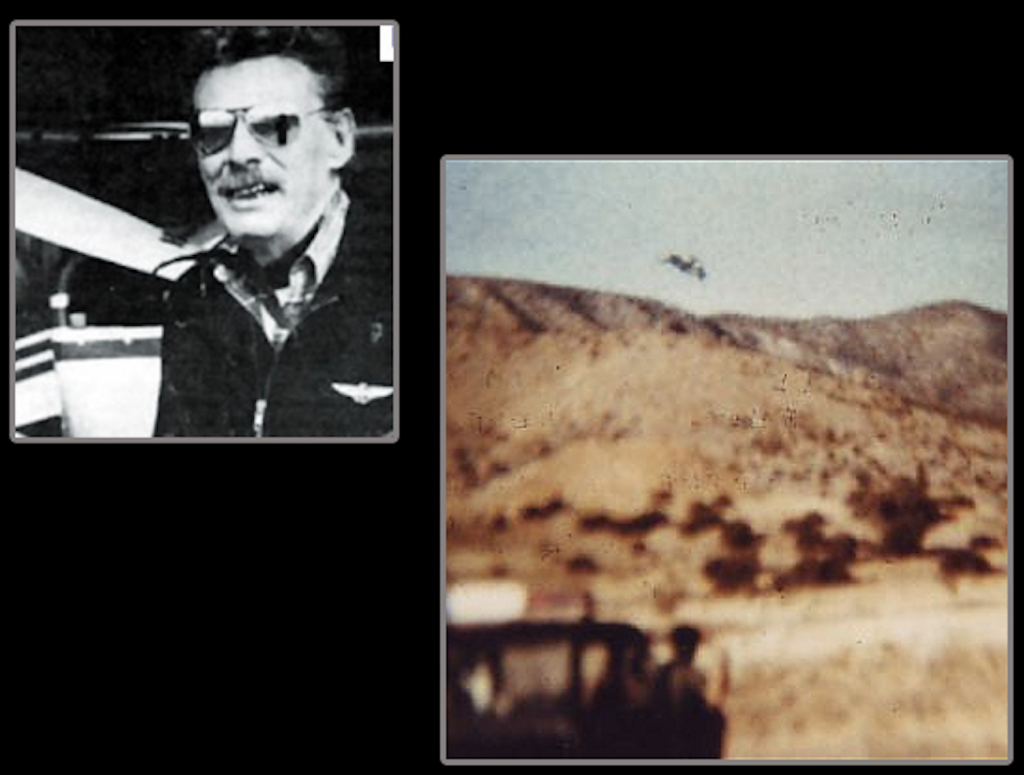 Cases like the Paul Bennewitz affair, where a businessman whose company supplied equipment to the U.S. Air Force was fed bogus information by an agent of the Air Force Office of Special Investigations to convince him that the Earth was being colonized by aliens working from an underground base near Dulce, New Mexico, only highlight the impact the intelligence community has had on the UFO phenomenon over the last seventy years.

Bennewitz was a physicist by training. He lived in New Mexico within sight of Kirtland Air Force Base, home to the Manzano Nuclear Weapons Storage Facility, and Sandia National Labs, a research site that mainly tests non-nuclear components of nuclear weapons.

In the late 1970s, Bennewitz became convinced that the strange lights in the sky over Kirtland were the advance team of a race of hostile aliens preparing to invade. He began using his skills as a physicist and an inventor to monitor strange radio emissions from Kirtland.

More significantly, he began writing letters to people that he thought should know what was happening in New Mexico. This brought him to the attention of the United States government and its military. Apparently, there was concern that someone as bright as Bennewitz might unintentionally expose something the Pentagon didn’t want the Kremlin to know. And thus, the Air Force Office of Special Investigations got involved.[i]

Having learned the essential parts of Bennewitz’s theories—very ironically from the man himself, by actually breaking into his home while he was out and checking his files and research notes—that aliens were mutilating cattle as part of some weird medical experiment; that they were abducting American citizens and implanting them with devices for purposes unknown; that those same aliens were living deep underground in a secure fortress at Dulce, New Mexico; and that we were all very soon going to be in deep and dire trouble as a direct result of the presence of this brewing, intergalactic threat, the Air Force gave Bennewitz precisely what he was looking for – confirmation that his theories were all true, and more.

Of course, this was all just a carefully-planned ruse to bombard Bennewitz with so much faked UFO data in the hope that it would steer him away from the classified military projects of a non-UFO nature that he had uncovered. And, indeed, it worked.

When Bennewitz received conformation (albeit carefully controlled and utterly fabricated confirmation) that, yes, he had stumbled upon the horrible truth and that, yes, there really was an alien base deep below Dulce, the actions of the Intelligence community had the desired effect: Bennewitz became increasingly paranoid and unstable, and he began looking away from Kirtland (the hub of the secrets that had to be kept) and harmlessly towards the vicinity of Dulce, where his actions, research, and theories could be carefully controlled and manipulated by the Government.[ii]

No, Virginia, there is no underground alien base at Dulce. It’s a government PSYOP. (Or rather, a MISO—Military Intelligence Support Operation is now the preferred term.) Paul Bennewitz was gaslighted by the AFOSI with the help of prominent ufologist William Moore, co-author of the first major book on the Roswell phenomenon, 1980’s The Roswell Incident. Moore admitted to his role in the Bennewitz affair in a presentation to the 1989 MUFON national convention, but he justified it by claiming he’d used the opportunity to search for information that might expose government knowledge about the alien origin of UFOs—to work as a double agent, in other words.[iii]

Oddly enough, this revelation served to reinforce the faith of true believers in the ETI meme. The government wouldn’t try to discredit a prominent ufologist like Paul Bennewitz if he wasn’t on to something, would they?

Yes, but what Bennewitz was onto had more to do with Russians than aliens. And the government deception worked beautifully. Not only did it distract attention from whatever the Air Force wanted to keep hidden at Kirtland AFB, it established the Dulce base as a fixture in UFO lore.

To be blunt, the UFO research community has assisted this deception by being willing dupes. The low standard of evidence required for wide acceptance makes it easy for stories like the Dulce base to spread. French researcher Jacques Vallee illustrated this point in his 1991 book Revelations: Alien Contact and Human Deception.

“Why doesn’t anybody know about [Dulce]?” I asked.

“It’s underground, hidden in the desert. You can’t see it.”

“The size of Manhattan.”

“Who takes out the garbage?”

The group looked at me in shock. There is a certain unwritten etiquette one is supposed to follow when crashed saucers and government secrecy are discussed; you must not ask where the information comes from, because informants’ lives would be in danger, presumably from hired assassins paid by the Pentagon, the kind who try to hit the tires of fully-loaded gasoline trucks speeding through refineries. And you are not supposed to point out contradictions in the stories. Questions must always be directed at the higher topics, such as the philosophy of the aliens, or their purpose in the universe—not the practical details of their existence. In other words, it is not done to ask any question that has a plain, verifiable answer.[iv]

What about contactees and abductees? Surely, not all their cases are fake. True enough. But it appears most of their stories stem from emotional or psychological issues that have nothing to do with the existence of ETIs.

As Jack Brewer documents in his book The Greys Have Been Framed: Exploitation in the UFO Community, accounts obtained from abductees under hypnosis are unreliable, to put it mildly. Hypnosis is not a trustworthy method of retrieving memories, and may actually be harmful.[v] Sadly, as Brewer notes:

Traumatized individuals are then at risk of sustaining deeper emotional damage while failing to seek qualified professional treatment. Such professional treatment is often discouraged within the UFO community in lieu of compiling so-called evidence of fantastic encounters with extraterrestrials.[vi]

Contactees may have various reasons for concocting stories of ETI encounters from just wanting to feel special to out-and-out delusions resulting from psychosis. But treatment comes second to hearing new “evidence” of ET’s existence.

The intelligence community doesn’t have to work very hard to push the ETI meme. The UFO community is doing just fine with that on its own.

Now, there are, without question, cases that can’t be explained away as delusions, hoaxes, or intelligence ops. Joe Jordan, co-founder of CE4 Research Group and MUFON’s National Director for South Korea, has compiled hundreds of accounts of “alien” abductions that have been stopped by victims who called on the name of Jesus. And, according to Jordan, this happens consistently. Now, why would that be, if the abductors were, say, aliens from Zeta Reticuli? The logical answer, if one is open to a supernatural explanation, is that the alien abduction phenomenon is primarily spiritual—in other words, demonic.

But that isn’t an answer the UFO community wants to hear, either, which is why Jordan calls it “the unwanted piece of the UFO puzzle.”[vii]

Are the Collins Elite Another PSYOP?

For all the interest in ETIs and the continuing popularity of science fiction in pop culture, there is no concrete evidence that actual extraterrestrials are visiting Earth, if they exist at all. So why the deception? In part, spooks and military men find it a useful cover for things they’d rather not tell the rest of us. On a spiritual level, there is a darker agenda.

In 2010, researcher and author Nick Redfern published Final Events and the Secret Government Group on Demonic UFOs and the Afterlife, which he calls “probably my most controversial book to date.”[viii] It tells the story of an interdepartmental think tank inside the United States government nicknamed the Collins Elite. The group, according to Redfern’s source, had been tasked with analyzing the UFO phenomenon, and it reached a disturbing conclusion: UFOs aren’t extraterrestrial, they’re demonic. Worse, the Collins Elite reportedly believe “the phenomenon ‘feeds’ upon a poorly understood form of energy contained in the human soul. In other words, we are being reared, nurtured, and finally digested, just like cattle.”[ix]

Furthermore, the “aliens” anticipated that discerning Christians might ID them for what they are, and they’ve countered that development by quietly manipulating the ETI disclosure movement to make those believers look foolish by convincing the public that extraterrestrial life is real. Members of the Collins Elite reportedly settled on an odd strategy for dealing with the crisis—establishing a Christian theocracy in America. Somehow, imposing pharisaical laws on the country would turn the global tide against the infernal, soul-sucking entities.[x]

Just how that’s supposed to work isn’t explained. Redfern can be excused, as he admits to being agnostic on matters spiritual, but if the story of the Collins Elite is true—and bear in mind that Redfern’s sources, as he admits, are mainly secret informants—then the U.S. government is in serious need of people who have opened a Bible at least once in their lives.

In my mind, the most disturbing thing about the book is that highly-placed insiders within the intelligence community could think so poorly—especially if they are Christians.…

What is the theological logic of this? That if the ruling elite are Christians, the demons will be powerless? Or that if a majority of U.S. citizens are Christians, then God can or will act? (This makes God capricious to say the least [“I won’t intervene against evil unless enough humans measure up”] or powerless to act unilaterally [“I cannot intervene against evil unless enough humans measure up”]). You can have that God. And how small-minded is this approach—to presume that the fate of humanity lies in the hands of the Church in the United States? What a muddled theological mess.[xi]

But maybe that was the point of putting out the story of the Collins Elite. As Redfern notes elsewhere, the United States government has been thinking about how to use religious ideas as propaganda for a long time.[xii] A 1950 RAND Corporation report commissioned by the Air Force, “The Exploitation of Superstitions for Purposes of Psychological Warfare,” details examples of how closely held beliefs were manipulated by operatives for various governments.[xiii] The RAND report appeared just as the UFO phenomenon hit its stride in the U.S.

Predictably, the publication of Final Events seeded the notion among skeptics and atheists that evangelical Christians are willing to use the UFO phenomenon to justify “a concentration camp vision of America based in ancient Jewish law.”[xiv] Those opposed to such a view of America’s future will probably be hostile to anything that looks like it moves the ball toward that goal line.

Now, since you’re reading this series, the odds are that you, like the authors, laugh out loud at the idea that Christians are going to take over this or any other national government anytime soon. Look at the culture around us, then ask yourself: Is this a society that’s going to vote a truly godly government into power? Not into office, into power.[xv]

When we analyze the story of the Collins Elite, which serves as an appropriate summary of the seventy-year history of the modern UFO phenomenon, the most likely explanation is this: Once again, human agents for the principalities and powers arrayed against humanity carried out an op to use ETI disclosure to advance the kingdom of darkness.

UP NEXT: The Nine and Other Gods from Space

[xv] For a further examination of that idea, we recommend the books Saboteurs by Tom Horn and The Deeper State by Lt. Col. Robert Maginnis (U.S. Army, ret.).