THE COMING GREAT DELUSION—PART 10: The Nine… and Other ‘GODS’ from Outer Space 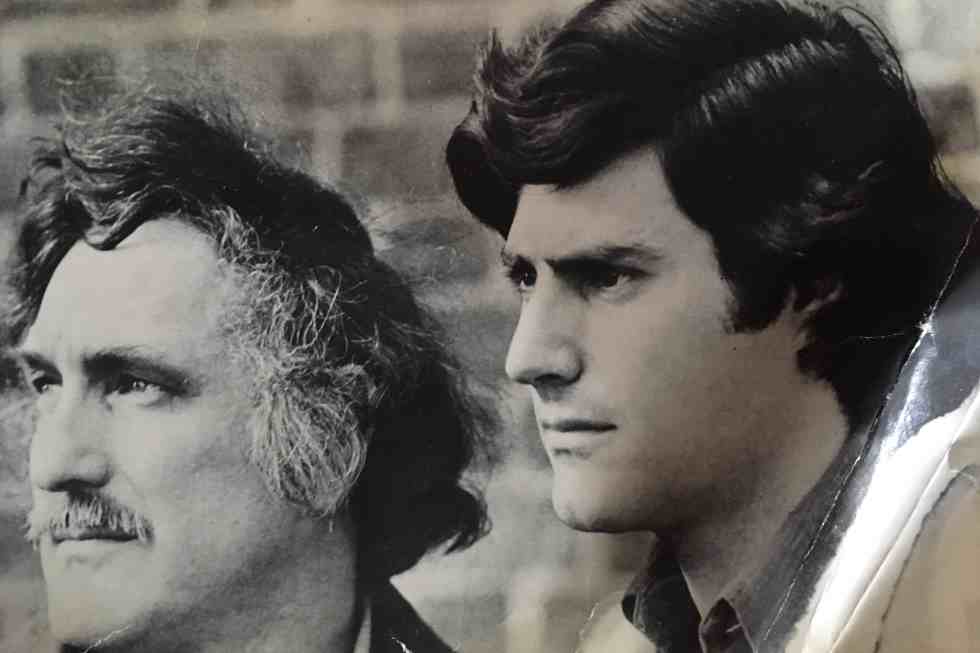 Without a doubt, Star Trek has been one of the most influential entertainment franchises in history. Kirk, Spock, McCoy, Scotty, and others are iconic characters recognized around the world. Oddly enough, though, through the series creator Gene Roddenberry, the starship Enterprise is linked to CIA mind-control experiments, a group of “aliens” who claim to be the creators of humanity, and—here we go again—the assassination of John F. Kennedy.

Let’s back up to World War 2. During the war, Andrija Puharich, the son of immigrants from the Balkans, attended Northwestern University outside Chicago, where he earned a bachelor’s degree in philosophy in 1942 and his M.D. in 1947. Through an invitation from a well-off family friend, who’d married into the Borden dairy family, Puharich found himself in Maine in early 1948, where he established a research institute to pursue his interest in parapsychology, the Round Table Foundation of Electrobiology, usually shortened to the Round Table.[i]

An early member of the Puharich Round Table was Aldous Huxley, author of Brave New World and The Doors of Perception, a book about his experiences with mescaline (and the book that inspired rock singer Jim Morrison to name his band The Doors). Puharich financed his research with gifts from donors, one of whom was Henry Wallace, who’d been vice president under Franklin D. Roosevelt. Wallace, a 32nd-degree Freemason, persuaded Roosevelt to add the reverse of the Great Seal of the United States—the pyramid and the all-seeing eye—to the dollar bill.[ii]

This series isn’t long enough to hold a full account of what Puharich was up to for the U.S. Army in the 1950s,[iii] but the upshot is that he was apparently researching parapsychology and chemical substances that might stimulate the human mind to reach into realities beyond those we can normally perceive with our natural senses. And at one of his gatherings in Maine, on New Year’s Eve in 1952, Puharich and his Round Table, working with a Hindu channeler named Dr. D. G. Vinod, conducted a seance that apparently made contact with something calling itself The Nine.[iv] Thus began a truly breathtaking chapter in America’s mostly hidden programs that searched for ways to weaponize the occult.

Some months later, on June 27, 1953, the night of the full moon, Puharich gathered around him what was to be a core group of the Round Table Foundation for another session with Vinod. The membership of this group of nine members—á la The Nine—is illuminating. Henry Jackson, Georgia Jackson, Alice Bouverie, Marcella Du Pont, Carl Betz, Vonnie Beck, Arthur Young, Ruth Young, and Andrija Puharich. Dr. Vinod acted as the medium.

Imagine the Fellowship of the Ring, with government funding and a security classification that was, well, “cosmic.”[v]

This group included old money—very old money. The Du Pont name is obvious, but some of the others were no less prominent. Alice Bouverie was an Astor—a descendent of John Jacob Astor and the daughter of Col. John Jacob Astor IV, who built the Astoria Hotel and went down with the Titanic. Arthur Young was the designer of the Bell helicopter; his wife had been born Ruth Forbes. Yes, that Forbes.

Ruth’s previous marriage had been to another old-money family that traced its roots back to the early days of the American colonies, George Lyman Paine. Their son, Michael Paine, married a woman named Ruth Hyde, and in 1963, Michael and Ruth Paine became friends with a young couple newly arrived from Russia, Lee and Marina Oswald.

So. A Du Pont, an Astor, and a Forbes/Paine, in a psychic research group funded by the U.S. government, communicating with…what?

And what was the monkey god doing there?

Dr. Vinod sat on the floor, the nine members of the group in a circle around him, with a copper plate on his lap, prayer beads in his hands, and a small statue of “Hanoum,” a Hindu god that the author believes to be Hanuman, the Monkey King. If this is so, it is interesting in that Hanuman was a human being, a minister, before becoming divine due to his devotion and courage. The half-human, half-divine image is one that becomes more important and more obvious as this study progresses. Another important aspect of Hanuman is his depiction in much Indian art as holding an entire mountain in one hand (and a club in the other). When—in the Ramayana and during the battle of Rama and Ravana—Lakshmana was mortally wounded, Hanuman raced to a mountain covered with different healing herbs. Not knowing which one Lakshmana required, Hanuman simply brought the entire mountain. Hanuman—as well as his fellow monkey-men, the Vanaras of southern India—is often shown with his hand in front of his mouth, signifying “silence” as well as obedience, in much the same way western occultists depict Harpocrates. In this sense, replete with silence, obedience, a club, and a mountain of herbs, Hanuman might easily have been the patron saint of MK-ULTRA.[vi]

What an interesting, um, coincidence. Remember that Aleister Crowley believed The Book of the Law was dictated to him by Aiwass, the messenger of Hoor-Paar-Kraat—Harpocrates.

Anyway, The Nine disclosed that they wanted the Round Table to lead a spiritual renewal on Earth, and eventually revealed that they were extraterrestrials orbiting the planet in a giant, invisible spacecraft.

Still, consider that the group assembled that night included highly intelligent, very successful people. Puharich later wrote, “We took every known precaution against fraud, and the staff and I became thoroughly convinced that we were dealing with some kind of an extraordinary extraterrestrial intelligence.”[vii] In other words, if this was a hoax, it worked on some very smart people.

On the other hand, the decades-long career of Andrija Puharich suggests that it may also have been a case of “leading the witnesses,” in a sense. He appears to have been a seeker who, like Fox Mulder in The X-Files, really wanted to believe.

But it was more than that. The Nine declared, “God is nobody else than we together, the Nine Principles of God.”[viii]

So extraterrestrial and divine. Remember that while the Round Table was hearing from The Nine, Aleister Crowley’s acolyte Kenneth Grant was developing his occult system based on an ET god from Sirius.

Dr. Vinod returned to India a short time later, and contact with The Nine was interrupted for more than fifteen years. Then, in 1971, Puharich discovered Israeli psychic Uri Geller.

Geller, best known for his alleged power to bend silverware with his mind, became for a time the new link to The Nine. Through Geller, The Nine informed Puharich that his life’s mission was “to alert the world to an imminent mass landing of spaceships that would bring representatives of The Nine.”[ix]

Well, that didn’t happen. And Geller decided to move on in 1973, so Puharich had to find someone else to bridge the gap between Earth and the giant, invisible craft allegedly orbiting the globe. He eventually connected with former race-car driver Sir John Whitmore and Florida psychic Phyllis Schlemmer.  She became the authorized spokesperson for their contact within The Nine, an entity who identified himself as “Tom.”[x]

Puharich, Whitmore and Schlemmer then set up Lab Nine at Puharich’s estate in Ossining, New York. The Nine’s disciples included multi-millionaire businessmen (many hiding behind pseudonyms and including members of Canada’s richest family, the Bronfmans), European nobility, scientists from the Stamford Research Institute and at least one prominent political figure who was a personal friend of President Gerald Ford.[xi]

A member of Lab Nine in 1974 and ’75 was Star Trek creator Gene Roddenberry, who reportedly wrote a screenplay based on The Nine. Some suggest that concepts from the channeling sessions Roddenberry attended surfaced in the early Star Trek movies and in the series Star Trek: The Next Generation and Star Trek: Deep Space Nine.

Before Lab Nine folded in 1978, the identities of Tom and the Other Eight were finally revealed: Tom was Atum,[xii] he said, the creator of the Great Ennead, the Egyptian gods worshipped at Heliopolis, near modern-day Cairo. Besides Atum, the Ennead included his children Shu and Tefnut; their children Geb and Nut; and their children Osiris, Isis, Set, Nephthys, and sometimes the son of Osiris and Isis, Horus.[xiii]

Connecting dots between Andrija Puharich, who was almost certainly a CIA asset during much of the time he conducted parapsychological research,[xiv] and the volunteers of his Round Table and Lab Nine, we can link the United States government (and specifically the U.S. Army and CIA during the period of mind-control research projects like BLUEBIRD and MKULTRA),[xv] members of upper-class society from the East Coast and Canada, the creator of the most successful science fiction entertainment franchise in history, extraterrestrials, and gods. And not just any gods—the pantheon that included the chaos god, Set, who Crowleyite Kenneth Grant believed was the spirit of the age.

How do we wrap our heads around this? Considering that Puharich was likely doing this research for the government and that he led the witnesses, suggesting to Geller and at least one of his successors while they were under hypnosis that they were being contacted by The Nine,[xvi] it appears that this was a long PSYOP to stir up belief in the existence of ETIs and the return of the old gods.

To what end? For Puharich and his superiors, maybe it was an experiment into group dynamics, or maybe a test of how people would react to the imminent arrival of extraterrestrial visitors. Or maybe, as with the Paul Bennewitz case, it was an intelligence op to misdirect the wealthy members of Lab Nine and their social circles toward an ETI explanation for any unexplained aerial phenomena and away from secret government projects.

What Should Be Our Goal?

As Christians, we must look past the human actors in movements like these. In the case of The Nine, how did their charade benefit the entities that spoke to Vinod, Geller, and Schlemmer? Frankly, it’s difficult to identify a specific goal other than spreading spiritual confusion. Certainly, seeding these ideas through influential members of high society and the military-industrial complex would be one way to do it. It’s one thing to mock Blue-collar Bubba when he claims aliens from Sirius are about to land, but it’s a different story when the one spreading the ET gospel is from one of the wealthiest families in the world or a successful industrialist who’s proven to be a productive member of society.

But spreading confusion about the Big Questions—where we came from, why we are here, and where we go when we die—may be enough for the principalities, powers, thrones, and dominions. See, the rebellious gods don’t care what you believe as long as it’s not this: Jesus is the way, and the truth, and the life, and no one comes to the Father except through Him.[xvii]

And for the record: He’s not from Sirius.

UP NEXT: Podesta’s ETI Wikileaks

[iii] For that we recommend Peter Levenda’s Sinister Forces: The Nine.