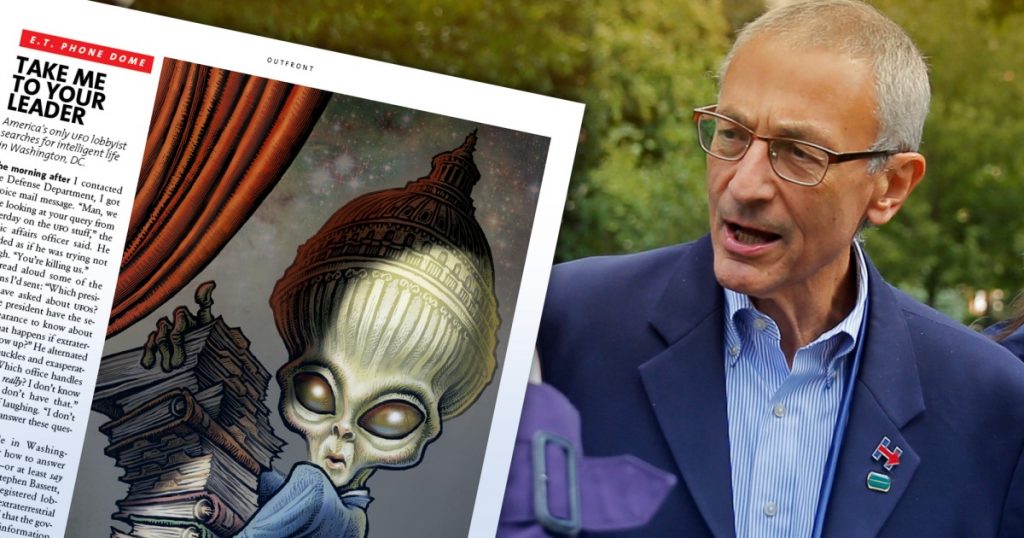 Ancient religions and modern science fiction are not the only factors influencing the movement for official disclosure. Not surprisingly, we see a great deal of movement through politics. In recent history, possibly even more than any other time, the discussion has become mainstream among presidential candidates and political circles of all kinds.

Many strange and unexpected events occurred during the presidential race between Donald Trump and Hillary Clinton in 2016. Secret recordings were released. Emails were deleted. Insults and rumors were thrown around by all. Even more, the term “Wikileaks” became a commonly used word across the country.

The website wikileaks.org became the central hub to release hacked emails belonging to members of the Democratic party. These emails covered a wide variety of topics and were examined and scrutinized on a near-daily basis. Most of the more popular emails discussed everything from political strategies to personal issues to even unfavorable feelings of certain Democrats toward Hillary Clinton. Through Wikileaks, average Americans were able to get hold of these emails, which led to one of the most infamous scandal allegations of all time: #Pizzagate.

There were others emails, however, that flew a bit more below the radar. Some researchers deemed them too crazy to deal with. Others took them incredibly seriously, yet did not have a large outlet such as news media at their disposal. These were the ETI emails concerning John Podesta, the official disclosure of the government’s UFO documents, and the push for an admission from the U.S. government of the legitimacy of the UFO phenomenon.

Who Is John Podesta?

John Podesta, a self-identified Catholic who works closely with Catholics in Alliance for the Common Good and Catholics United, is the former chairman of the 2016 Hillary Clinton presidential campaign. Prior to that, he served as chief of staff to President Bill Clinton and counselor to President Barack Obama. Podesta is an honorary patron of the University Philosophical Society (aka “The Phil”). He also was the U.S. representative to the U.N. High-Level Panel in the Post-2015 Development Agenda.[i] This is a process led by the United Nations to define the future global development framework that will succeed the current Millennium Development Goals (MDGs). The MDGs contain eight globally agreed-upon goals in specific areas:

Building a global partnership for development[ii]

In 2013, the High Level Panel on the Post-2015 Development Agenda released a report entitled “A New Global Partnership: Eradicate Poverty and Transform Economies through Sustainable Development,” which describes a universal agenda to eradicate extreme poverty worldwide by 2030 and fulfill the promise of sustainable development.[iii] This report calls on the entire world to rally around a “New Global Partnership” offering hope and a specific role for every person in the world. In order to achieve this goal, the report calls for the post-2015 goals to drive five large transformative shifts:

Along with the efforts consistent with a globalist agenda, Podesta also earned $90,000 in 2013 as a consultant to the Hansjorg Wyss Foundation (or HJW Foundation), the private foundation of billionaire Hansjorg Wyss, who creates and funds bioengineering institutions in America and Switzerland. Wyss also became the CEO of Synthes, an industry giant specializing in making plates and screws to stabilize broken bones.

In 2009, the U.S. attorney in Philadelphia accused Synthes of running illegal clinical trial and human experimentation. Between 2002 and 2004, Synthes had tested a product called Norian XR, a cement with the ability to turn into bone when injected into the human skeleton. The FDA explicitly told Synthes not to promote Norian for certain spine surgeries, but the company decided to ignore the FDA and continue anyway. At least five patients who had Norian injected into their spines died on the operating-room table. Interviews with more than twenty former employees and surgeons involved in the Norian project, hundreds of pages of court transcripts, and company documents submitted in the case reveal that Synthes not only disregarded multiple warnings, but also ignored scientists’ cautions stating the cement could cause fatal blood clots.[iv] This all occurred prior to Podesta accepting a consultant position at the HJW Foundation.

In 1995, John Podesta was of major influence in a process resulting in President Bill Clinton signing Executive Order 12958, which created new standards for the process of classifying documents within the government. This led to a massive and successful effort to declassify over eight hundred million pages of historically valuable records. One outcome of this was the government’s 1995 admission of its over-twenty-year involvement in funding highly classified and special-access programs in remote viewing. The effort also focused on classified UFO records.

Podesta has openly opposed the excessive use of secrecy and classification within the government. In a 2004 speech at Princeton University, he condemned what he called the U.S.’ “excessive government secrecy” and “bloated secrecy bureaucracy.”[v] Podesta has been a long-time advocate for the disclosure of UFO files by the government. He has supported petitions to the government to release files related to the UFO phenomenon. In 2002 at a news conference organized by the Coalition for Freedom of Information, he was quoted as saying, “It is time for the government to declassify records that are more than 25 years old and to provide scientists with data that will assist in determining the real nature of this phenomenon.”[vi] As Wikileaks revealed in clearer detail, one of John Podesta’s main motivations is the goal of the official disclosure of UFOs along with supposed current extraterrestrial contact with human beings.

The Players in the Emails

During her campaign for president of the United States, Hillary Clinton offered an odd promise concerning UFOs. In January 2016, to answer a reporter’s question regarding UFOs during a meeting with the Conway Daily Sun, Clinton stated she would “get to the bottom of it.”[vii] The article from the publication reported that Clinton had answered the reporter’s question with enthusiasm. CNN, however, ran a similar story with the headline, “Hillary Clinton (jokingly) pledges UFO probe.”[viii] The article continues to state that Clinton was only joking when she pledged to look into UFOs, even calling it a “tongue-in-cheek” response. In contrast, however, a New York Times article stated:

Mrs. Clinton has vowed that barring any threats to national security, she would open up government files on the subject, a shift from President Obama, who typically dismisses the topic as a joke.… Mrs. Clinton, a cautious candidate who often bemoans being the subject of Republican conspiracy theories, has shown surprising ease plunging into the discussion of the possibility of extraterrestrial beings.[ix]

Perhaps the reason CNN claimed it was a joke was due to the conspiratorial nature of UFOs and the fear of being associated with what, to some, are considered “Republican conspiracy theories.”

In any event, it would seem Clinton actually does take the topic of UFOs seriously. She was even familiar enough with the topic to correct Jimmy Kimmel in a late-night television interview. When Kimmel asked Hillary Clinton about UFOs, she said, “You know, there’s a new name. It’s unexplained aerial phenomenon, UAP; that’s the latest nomenclature.”[x] Joseph G. Buchman, who was a key organizer and moderator for the 2013 Citizen Hearing on Disclosure in Washington, D.C., said, “Hillary has embraced this issue with an absolutely unprecedented level of interest in American politics.”[xi]

Hillary Clinton’s campaign chairman, John Podesta, wrote in his foreword for the book, UFOs: Generals, Pilots and Government Officials Go on the Record, written by investigative journalist Leslie Kean and released in 2010, “The time to pull back the curtain on the topic is long overdue.” When Podesta left the White House in 2015 during the Obama administration, he posted on Twitter:

Finally, my biggest failure of 2014: Once again not securing the #disclosure of the U.F.O. files. #thetruthisstilloutthere

Podesta’s interest in official disclosure concerning UFOs was made even more public with his leaked emails through WikiLeaks. Podesta’s leaks showed multiple emails from Dr. Edgar Mitchell (1940–2016), Apollo 14 astronaut and sixth man on the moon, detailing plans and requesting meetings with Podesta concerning UFO disclosure. Also included in these emails are Terri Mansfield, whom Mitchell described as his “Catholic colleague,” and Eryn Sepp, special assistant to the counselor to the President.

After retiring from his career with NASA in 1972, Edgar Mitchell explored his interests in consciousness and paranormal phenomena. In 1973, Mitchell founded the Institute of Noetic Sciences, whose stated goal is “to create a shift in consciousness worldwide—where people recognize that we are all part of an interconnected whole and are inspired to take action to help humanity and the planet thrive.”[xii] Concerning UFOs, Mitchell is quoted as saying he was “90 percent sure that many of the thousands of unidentified flying objects, or UFOs, recorded since the 1940s, belong to visitors from other planets.”[xiii] Mitchell also founded Quantrek, an organization dedicated to research into zero-point energy and other areas of quantum physics toward the goal of discovering new energy sources. Concerning Quantrek, Mitchell is quoted as saying:

And on the other side of that is a newer effort, a different effort, a parallel effort, that I have undertaken having to do with the quantum hologram and the fact that we need new energy resources. There is a new organization called Quantrek, which is involved in the deeper, hard sciences of that effort, and parallel to what the Institute is doing with its transformation work.[xiv]

Terri Mansfield was the volunteer cofounder and executive director of the Arizona Department of Peace Campaign from 2003–2009, which supported the creation of a cabinet-level Department of Peace in Washington, D.C.. It was hoped that this department would serve as an umbrella to support nonprofits already working to end violence in communities. On her website, Terri is described as such:

Concerning her opinions about ETI and her connection with Mitchell and Podesta, Mansfield’s website also states:

In addition, Terri is the Director of the ETI (Extraterrestrial Intelligence) Peace Task Force. The contiguous universe ETI are nonviolent, obedient to God, and superior to all celestials in our universe. In this capacity she worked closely with the late Apollo 14 astronaut Dr. Edgar Mitchell, with the intention of them meeting first with former White House Counsel John Podesta, then with President Obama on all ETI-related matters.[xvi]

Combining her Catholic faith with her beliefs in aliens, Mansfield describes her own opinion concerning the role of ETI in human life with this call to action for 2017:

As we enter 2017, Year of Justice, excluded from our mission and envions are everyone and anyone who are not now in obedience to God.

Only those are included and invited to participate with us who are in obedience to God, facilitated by 100 % obedience to God’s 100% therefore, nonviolent, ETI, extraterrestrial intelligence.

As a process of self-elimination, we work only with those ETI in the contiguous universe.

Over millions of years, our ETI have evolved to nonviolence, and oversee all celestials in our universe who are not yet 100% obedient to God.

It is a privilege to serve God while assisting our ETI to bring zero point energy to our planet.[xvii]

These beliefs, along with Mitchell’s, are prevalent in their leaked emails to John Podesta. Of course, anyone can email anybody. Does merely receiving an email mean Podesta was involved in this way of thinking? Would this mean American policy regarding secrecy and disclosure was being formed through this type of worldview? Of course not. Merely receiving an email does not indicate any of those things. However, what if there was evidence showing that John Podesta may have met with Edgar Mitchel and Terri Mansfield after their emails were sent? If Mitchell and Mansfield expressed their views in an email and requested a meeting with Podesta, and if the request was granted, might this show that Podesta was at least partly on the same page toward achieving these efforts?

UP NEXT: Podesta’s Leaked Emails Concerning Meetings and ETI