The Second Coming of Saturn Part 7: The Abi 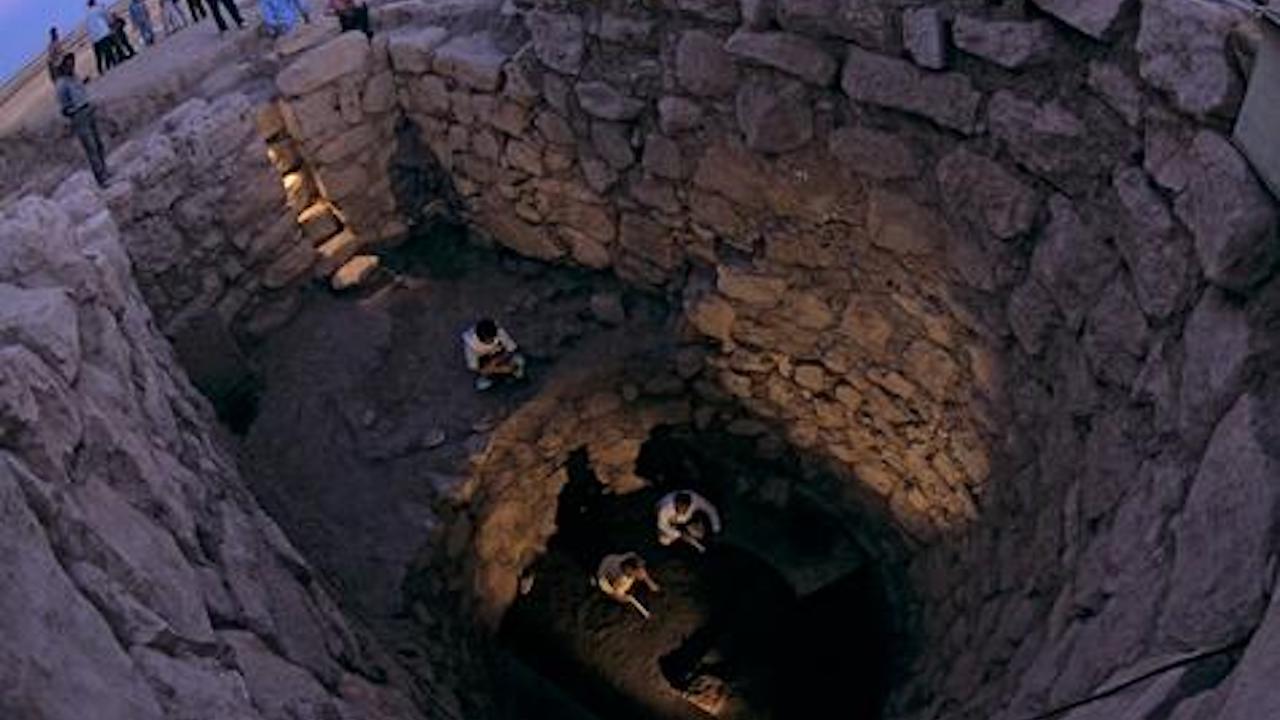 The central feature of the temple at Urkesh was not a chapel or sanctuary, a place set apart for prayer and contemplation, or even a meeting hall for communal worship. It was a deep pit dug into the earth used to summon deities from the netherworld, including the chief god of the Hurrians, Kumarbi.[1] 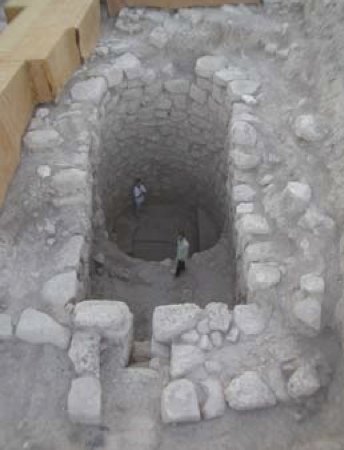 Entities summoned from “the dark earth” were offered sacrifices in exchange for favors, often carrying some kind of evil back to the world below. It’s known from later ritual texts found at Hattusa, the capital of the Hittite empire, that this pit was called an abi.[2] It’s a distinctly Hurrian religious structure, unlike anything in southern Mesopotamia and not connected to the well-known Amorite kispum ritual.[3]

To be clear, spirits of the dead do not freely roam the earth. Human spirits do not hang around waiting to appear when summoned through the correct rituals, communicate with mediums, or intercede for the living in the natural realm.

God may allow human spirits to return to the earth for His purposes. First Samuel 28 tells the story of the prophet Samuel, who delivered the disturbing news to Saul that he and his sons would fall in the coming battle with the Philistines. But nothing in Scripture even hints that this is a regular occurrence; indeed, the medium Saul consulted was shocked when the prophet appeared: “When the woman saw Samuel, she cried out with a loud voice.”[4] The Hebrew word translated into English as “cried out,” zāʿaq, conveys the sense of shouting with alarm or calling for help.[5] In other words, the medium of En-dor expected to see a spirit, but not a human spirit.

Similarly, the Hurrian rituals preserved by the Hittites were used to summon spirit beings rather than humans. The abi at Urkesh was a monumental underground structure lined with stone, originally dug in a circle about thirteen feet in diameter. The pit has been excavated down to a depth of about twenty-six feet, revealing potsherds dated to about 2600 BC.[6] However, it’s clear that the walls of the abi extend farther down, possibly another twenty feet, before reaching virgin soil.[7] This may push the date of the pit’s creation back to the middle of the fourth millennium BC, around the time the city was first occupied and the niched building erected on the terrace above.[8]

At some point, one wall of the abi was removed and a square shaft excavated, creating a keyhole shape and giving the entire structure a total length, end-to-end, of about twenty-four and a half feet. A narrow staircase on the square end allowed access by a priest or the king and queen, who apparently conducted some of the rituals in the pit. The abi was not originally covered, although it appears there was a vaulted ceiling over the circular portion for a period of time, and it is almost certain that the square section of the “keyhole” was under a roof.[9] 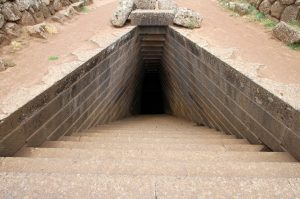 The keyhole shape continued to have divine significance for thousands of years around the Mediterranean. It’s well known as the symbol of Tanit, the consort of Baal Hammon (another aspect of Kumarbi, about whom more later). The keyhole is found on stelae at the tophets of Carthage and Motya (San Pantaleo Island, near Sicily), and at a number of sacred wells from the Bronze Age Nuragic culture on the island of Sardinia.[10]

Rituals in the abi were performed at sunset or at night inside a magic circle dug into the dirt of the pit with a hoe or shovel, or traced with a pin, knife, or dagger.[11] This is remarkably similar to modern occult rituals in which magicians use a magic circle, sometimes drawn with salt or chalk, to protect themselves from a spirit being summoned. Similar practices were known in Akkad, where a magic circle called a zisurrû was marked out with flour to protect one against demons or curses.[12]

The purpose of a ritual pit was to allow the “primeval gods” or “former gods” to rise from the netherworld, drawn to the sacrifices, to hear the plea of the officiant:

When at night on the second day a star leaps, the offerer comes to the temple and bows to the deity. Two daggers which were made along with the (statue of) the new deity they take (with them) dig a pit for the deity in front of the table. They offer one sheep to the deity […] and slaughter it down in the pit.[13]

While a sheep is mentioned in the example above, and bones of goats and donkeys have also been found, the animals typically offered as sacrifices at the abi in Urkesh were most often piglets and puppies, which apparently served a purificatory purpose. Pigs may have been thought to have a connection to the underworld gods because of their habit of rooting in the dirt, but why young animals were preferred to adults is unknown.[14] The gods of the underworld apparently didn’t mind offerings of animals considered unclean onto which additional impurities had been ritually transferred.

At the conclusion of a ritual, it was necessary to seal up the pit (or pits—some ritual texts required as many as nine, one for each of the underworld gods) that had been opened by covering it with loose dirt, loaves of bread, or a cloth.[15] These lids, fragile as they seem to us, were considered effective enough at sealing the exits to prevent sinister forces from escaping the underworld and wreaking havoc on the living.

The underworld deities were led by the sun-goddess of the earth, Allani, whose name means “the lady” (of the underworld).[16] The sun-deity’s connection to the netherworld in the religions of the ancient Near East stems from the observable fact that the sun is below the horizon about half the time. Kumarbi, the father of the Hurrian pantheon, is not listed among the gods of the netherworld in these rituals, although he is mentioned in other texts as one of the “former gods” consigned to the underworld by the king of the pantheon, the storm-god Teshub.

Interestingly, these “primeval gods” were referred to in Akkadian translations as the Anunnaki, similar to Mesopotamian traditions that had developed by the time of Abraham, Isaac, and Jacob depicting the former chief deities of Sumer as gods of the underworld.[17]

Reconstruction of the temple of Kumarbi (credit: Urkesh.org)

Among the other infernal deities summoned in the Hurrian abi rituals was the personified Abi. This seems odd, contrary to our concept of the pagan gods of the ancient world as anthropomorphic, or at least semi-humanlike satyrs and centaurs. But a ritual pit as a god? Scholar Billie Jean Collins explains that the inclusion of “Abi” among the underworld deities “is not a testimony to its divine status in the proper sense as it is a recognition of its extra-human power to connect the realm of the gods with that of man.”[18]

And remember that Hades was both a place and an underworld deity, so this isn’t an unfamiliar concept.

Another aspect of the abi was the “divine watercourse,” the rough translation into English of a site called the dKASKAL.KUR in ritual texts. This appears to be a sacred pool intended to resemble a riverbank where many of the sacred rituals of the Hurrians took place.[19] This term has only been found in nine Hittite texts, one of which is a treaty dated to about 1280 BC between the Hittite king Muwatalli II and Alaksandu of Wilusa.[20] Some scholars identify Alaksandu as Alexander of Troy,[21] better known as Paris, the guy who started the Trojan War by stealing the beautiful Helen away from her husband, King Menelaus of Sparta.[22]

We get a better sense of the term dKASKAL.KUR by breaking it down into its components, both of which are Sumerian words: KASKAL (“road,” “journey,” and/or “military campaign”) and KUR, which means “mountain,” but in this context surely points to its other meaning, “netherworld.”[23] Interestingly, the sign dKASKAL.KUR was also used during the time of Abraham to refer to the Balikh River,[24] a tributary of the Euphrates that joins the big river near Raqqah, Syria, the city that was the de facto capital of the Islamic State between 2014 and 2017.

KASKAL was also the Sumerian equivalent for the Akkadian word ḫarrānum and the ideogram for Harran, the city from which Abraham began his journey to Canaan. Located on a key east-west trade route, Harran was appropriately named, because it was a crossroads connecting a number of key cultures in the biblical world, among them the Assyrians, Hittites, Amorites, and Hurrians. Harran also sits on the Balikh, which makes the river’s ancient name, “Road to the Netherworld,” doubly interesting—but I digress.

The point of this brief detour is that a stone drain installed in a platform alongside a palace at Urkesh may be an early form of the dKASKAL.KUR and connected to the rituals for contacting the underworld gods in the abi.[25]

In short, the abi was an underground portal to the netherworld. And the discoveries at Urkesh connect Hurrian religious rituals from western Syria and central Turkey as late as 1200 BC, with a monumental religious center constructed in northeastern Syria more than two thousand years earlier.

Now, why is this relevant to our understanding of the Bible, Christian theology, and the long supernatural war for the souls of humanity? Because Kumarbi and the “former gods” had been banished to the netherworld. This links those spirits to the sinful angels mentioned by Peter and Jude, an identification that, while admittedly speculative, is supported by the evidence. I intend to show that Kumarbi, known throughout history by a number of names, is the Watcher chief Shemihazah.

Forbidden rites to contact the spirit realm, documented at the Hurrian city of Urkesh more than five thousand years ago, have continued to this day. And the entity who inspired those rituals, the powerful Watcher called Shemihazah, still influences the world even from his pitch-black prison in the abyss.

Next: Abraham, the Hurrians, and the gods of the netherworld

GET THE MUST HAVE NEW RESEARCH! 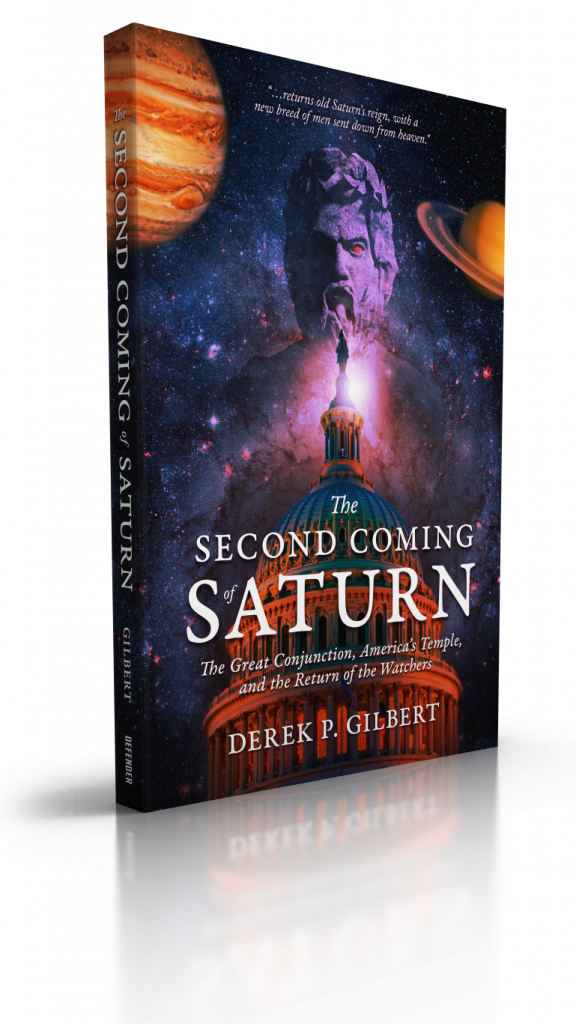 [2] Giorgio Buccellati, “When Were the Hurrians Hurrian? The Persistence of Ethnicity at Urkesh.” In J. Aruz, S. Graff and Y. Rakic (eds.), Cultures in Contact (New York: Metropolitan Museum of Art, 2013), p. 87.

[10] The keyhole shape of the Nuragic holy wells is a mystery that needs further investigation. The wells are dated to the Bronze Age, prior to 1200 BC, but the first Phoenicians, who brought the worship of Tanit and Baal Hammon to the island, aren’t supposed to have reached Sardinia until about five hundred years later, in the eighth century BC.

[20] Edmund I. Gordon, “The Meaning of the Ideogram dKASKAL.KUR = ‘Underground Water-Course’ and Its Significance for Bronze Age Historical Geography.” Journal of Cuneiform Studies, Vol. 21 (1967), p. 73.

[21] Wilusa is the name behind the title of Homer’s epic poem about the Trojan War, The Iliad.

[22] That’s not certain, since the treaty is dated about fifty years earlier than the best guess for the date of the Trojan War.