The Second Coming of Saturn Part 15: Babel and Ezekiel’s Wheel 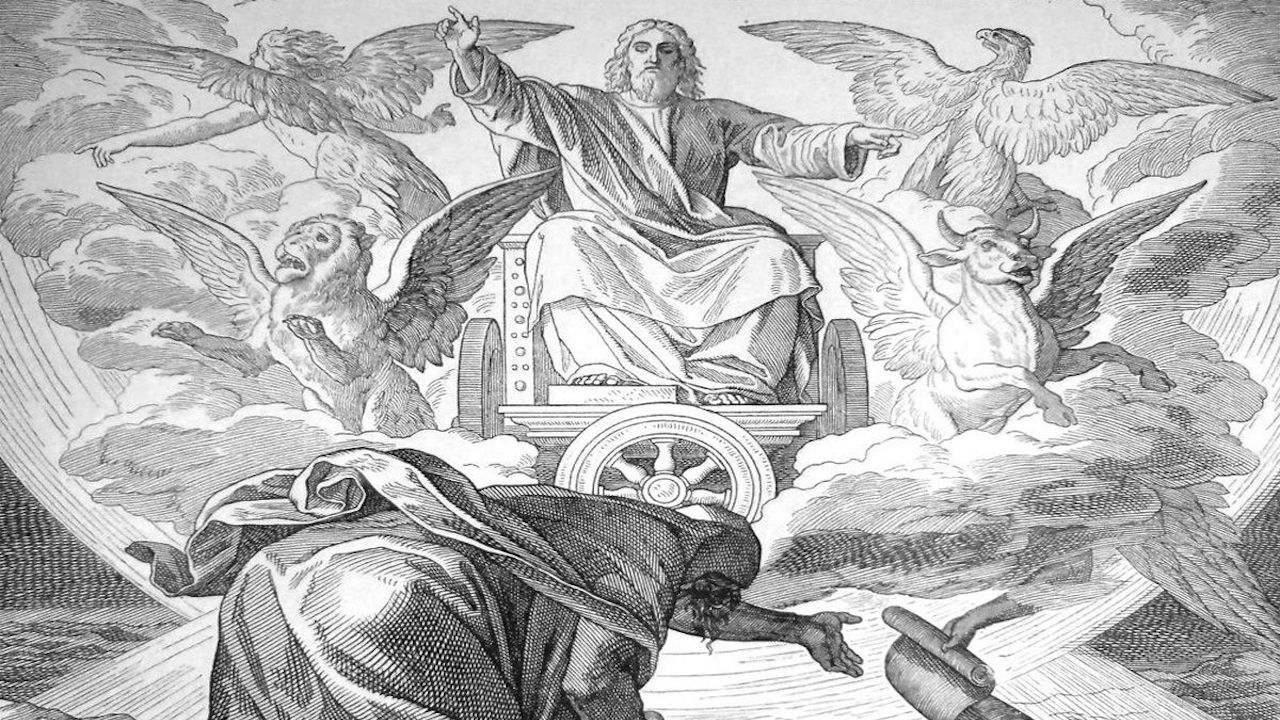 Enlil was the chief god of Mesopotamia for more than a thousand years. As noted earlier, his “reign” began with the rise of the Akkadian empire in the twenty-fourth century BC. But if we look farther back in history, to the end of the Uruk Period around 3100 BC, we may find another hint at this god’s arrogance and a very clear message from God that he will not be allowed out of the abyss before the appointed time.

I described earlier the effort by Nimrod, who was the Sumerian king Enmerkar, to expand the temple of the god Enki, the E-abzu (“House of the Abyss”), to serve as “an abode of the gods.”[1] This temple, commonly called the Tower of Babel, was not at Babylon, despite the similarity between the names. The temple was, in fact, located at an ancient city called Eridu.

This isn’t as odd as it might seem. The name “Babylon” was used for other Mesopotamian cities, including Eridu.[2] The ziggurat at Eridu is the oldest and, had it been completed, would have been the largest in all of Mesopotamia, a description that’s consistent with the little we know about the career and ambition of Nimrod. It also fits with archaeology of the fourth millennium BC, which, as we noted in an earlier chapter, was when the city of Uruk (biblical Erech), was, with Babel, the “beginning of his kingdom.”[3]

In the late 1940s, archaeologists working at the site of Eridu, Tell Abu Shahrain in southeast Iraq, made a fascinating discovery. As builders worked on the new and improved E-abzu, the construction project was suddenly and inexplicably interrupted:

The Uruk Period…appears to have been brought to a conclusion by no less an event than the total abandonment of the site…. In what appears to have been an almost incredibly short time, drifting sand had filled the deserted buildings of the temple-complex and obliterated all traces of the once prosperous little community.[4]

If you’re familiar with the story of the Tower of Babel, then you don’t need me to tell you that the discovery of the archaeologists tracks with the account in the book of Genesis:

“Come, let us go down and there confuse their language, so that they may not understand one another’s speech.” So the Lord dispersed them from there over the face of all the earth, and they left off building the city. (Genesis 11:7–8, emphasis added)

The Uruk period ended around 3100 BC, after which the influence of Nimrod’s city faded and power was shared with other Sumerian cities such as Ur, Lagash, Kish, and Umma.

Here’s the reason for circling back to the account of the temple to Enki, who’s often depicted as a rival to Enlil in Mesopotamian myths: It’s generally accepted that the name “Babel” derives from the Akkadian words bab ilû, typically translated “god-gate” or “gate of the gods.” While this is speculative, let me suggest a new idea: It’s possible that bab ilû meant “gate of ‘the’ god,” Enlil. Perhaps Nimrod’s expansion of the “House of the Abyss” was intended to serve as a portal to contact Enlil in the abzu, similar to the use of the abi to reach Kumarbi at Urkesh. Or, since the poem Enmerkar and the Lord of Aratta describes the rebuilt E-abzu as an “abode of the gods,” maybe it was Nimrod’s hope that the Tower of Babel would allow Enlil/Kumarbi/Shemihazah to return from the abyss.

Again, this is speculation. There is no evidence from the historic period that Enlil was ever worshiped at Eridu. However, the Tower of Babel incident occurred during the Uruk period, before the invention of writing. Is it possible that part of the story was lost or forgotten before Enmerkar and the Lord of Aratta was written on clay? We’ll never know, but it’s worth considering—especially since we’re fairly sure, thanks to the evidence from ancient Urkesh, that Enlil was worshiped by the Hurrians in northern Mesopotamia (as Kumarbi) when Nimrod broke ground at Eridu.

It is certain that God took this entity seriously. Jesus specifically declared His divinity at Hermon, the mountain sacred to this entity, by choosing it as the Mount of the Transfiguration. But six hundred years earlier, God revealed His glory to Ezekiel at another place that is just as significant:

In the thirtieth year, in the fourth month, on the fifth day of the month, as I was among the exiles by the Chebar canal, the heavens were opened, and I saw visions of God. On the fifth day of the month (it was the fifth year of the exile of King Jehoiachin), the word of the Lord came to Ezekiel the priest, the son of Buzi, in the land of the Chaldeans by the Chebar canal, and the hand of the Lord was upon him there. (Ezekiel 1:1–3)

This is Ezekiel’s famous vision of the cherubim and the “wheel within a wheel” that has so deluded the UFO community into believing that God is a space traveler. This has been sufficiently addressed elsewhere; suffice it to say that Ezekiel’s readers knew that what he saw was a royal throne and its supernatural guardians, not a spacecraft. 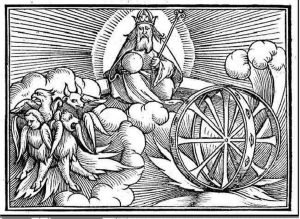 God revealed His throne room to Ezekiel directly above the temple of Enlil!

The important point for us here is a geographic detail that was so important Ezekiel included it twice: He was “by the Chebar canal.” Scholars used to connect the Chebar to the Hubur, a river that in Mesopotamian cosmology was similar to the Styx—the river one crossed to reach the netherworld. That idea has been discarded and it’s now accepted that the Chebar canal was the Naru Kabari, which is today a dry riverbed called the Shatt en-Nil. Here’s the important bit: Back in the day, it flowed right through the center of Nippur.[5]

Please take a moment to get your head around that: God revealed Himself to Ezekiel in all of His glory right over the temple of the chief god of Mesopotamia! This was no more a coincidence than Jesus climbing Mount Hermon for the Transfiguration. In fact, this was so important to Ezekiel that he reminded his readers four more times (in chapters 3, 10, and 43) of the vision of glory he’d seen “by the Chebar canal.”

Before we leave this chapter, I must call your attention to one more reference in the Bible clearly directed at this ancient enemy of God:

Then he said to me, “This is the word of the Lord to Zerubbabel: Not by might, nor by power, but by my Spirit, says the Lord of hosts. Who are you, O great mountain? Before Zerubbabel you shall become a plain. And he shall bring forward the top stone amid shouts of ‘Grace, grace to it!’” (Zechariah 4:6–7, emphasis added)

Because you’re paying attention, you spotted the reference to the “great mountain” right away. Bible commentators usually take this as a metaphor for a difficult task, like the one that faced Zerubbabel—rebuilding the Temple. That analysis is too naturalistic. It completely misses the reference to a pagan deity who was well known, especially to Jews who’d been oppressed by invaders from Mesopotamia—first the Assyrians, and then the Chaldeans from Babylon—for about two hundred years by the time of Zechariah and Zerubbabel.

Zechariah’s ministry began around 520 BC,[6] no more than seventy-five years after Ezekiel’s vision of God’s throne room above the city of Nippur. Zechariah was privileged to hear God literally mock Enlil in the abyss! The Lord’s message to the fallen Watcher was blunt: “My people will rebuild My house on My mountain. You, ‘O Great Mountain,’ are no mountain at all.”

In other words, Enlil, the “Great Mountain,” was appropriately titled, since “Great Mountain,” in Sumerian, can also mean “Great Below” or “Great Netherworld.” In fact, by the time of the Exodus, Enlil was listed among the “former deities” in Hittite religious texts that summoned deities from the underworld. By the time of Saul and David in Israel, Mesopotamians believed Enlil was a permanent resident of the Great Below (note: “Illil,” from il-ilû, is an alternate form of Enlil):

Illil’s fall into the underworld is recorded in first millennium texts which explain the mythical background of some cultic rites. A text from Nineveh, SAA III 37 (pp. 92–95), concerns some rituals in Marduk’s temple Esagil in Babylon. It alludes to some divine beings who “set up a clamor against Illil and Anu, poured out their sheen on them, […] broke their [win]gs and [cast them down] into the Abyss.”[8]

Like his other identities, El and Kumarbi, and others we’ll discuss in upcoming chapters, Enlil had a firm connection to the land of the dead by the time of Isaiah, Ezekiel, and Zechariah.

Peter and Jude tell us that he and his colleagues, the angels who sinned, will remain in the kur—the netherworld—until the time of the end. Their release is described in chapter 9 of the Book of Revelation, and we’ll discuss that in an upcoming article.

Next: Lord of the Corpse

[2] Stephanie Dalley, “Babylon as a Name for Other Cities Including Nineveh.” In R. Biggs, J. Meyers & M. Roth (Eds.), Proceedings of the 51st Rencontre Assyriologique Internationale (Chicago: The University of Chicago, 2008), pp. 25–26.