The Second Coming of Saturn Part 16: Father-God of Akkadians, Amorites and Philistines 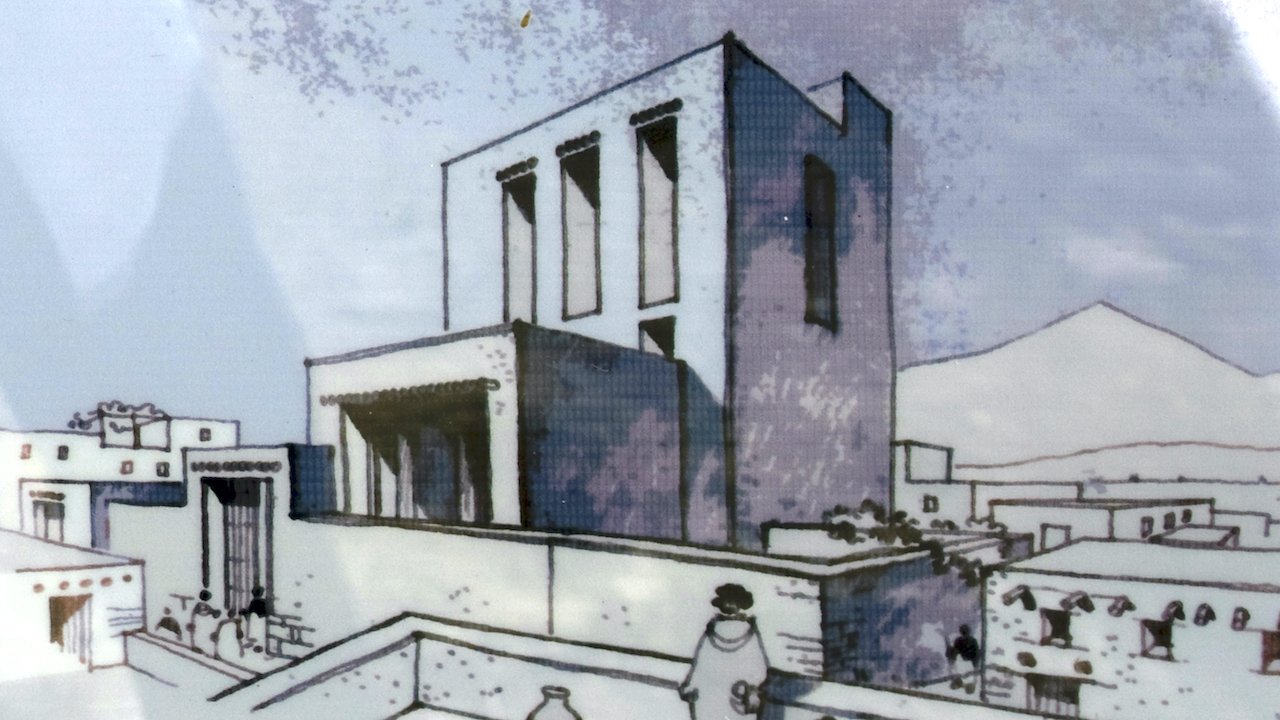 Artist reconstruction of the temple of Dagan in Ugarit, destroyed around 1185 BC

Now we move to the part of Mesopotamia that lies between the areas that were home to the entities we’ve already discussed: Kumarbi, in the northern territory of the Hurrians; El, whose home was in the west; and Enlil, venerated mainly in southern Mesopotamia. In the middle of these territories we find their equivalent, Dagan.

Dagan was the chief god of the middle Euphrates region, the area along the great river in what is now Syria. The entity is still a mystery after two hundred years of archaeologists digging in the Syrian sand. You’ve no doubt noticed the similarity between the name of this god and Dagon, chief god of the Philistines. You’re right—it’s the same god, the one whose idol fell on its face before the Ark of the Covenant, losing its head and hands in the process, a rather important bit of symbolism. Scholars believe the way his name was pronounced changed over the centuries, which is why the last a became an o in English.

Contrary to popular belief, Dagan was not a fish-god. An Internet search for pictures of Dagan/Dagon usually turns up images of a man in a fish costume identified as Dagon or a priest of the god. This is an error that was first made popular around 1860 by Alexander Hislop’s book The Two Babylons. While Hislop meant well, he didn’t have access to more recent archaeology—and, to be honest, his scholarship left something to be desired. 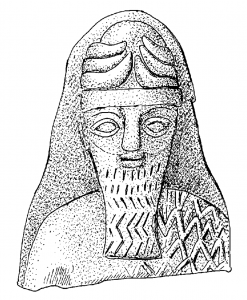 Ironically, the guy in the strange fish cloak costume was one type of the supernatural being called apkallu in Mesopotamia. As noted earlier, the apkallu were the Watchers, the “sons of God” from chapter 6 of Genesis and the rebellious Watchers from the Book of 1 Enoch. (The other two types of apkallu were a winged, bearded man and a winged humanoid with the head of an eagle.) Since we’re building a case that Dagan was just another name for Shemihazah, chief of the Watchers, then in a sense he actually was one of the fish-cloaked entities summoned for protection and good luck by Mesopotamians even though Dagan himself was worshiped as a grain-god and, more important, king of the Amorite pantheon in Syria.

The notion that Dagan was a god of fish may have started with a bit of folk etymology. Dāg is the Hebrew word for “fish,”[1] and since the Philistines lived on the coastal plain between Israel and Egypt, the worship of a fish-god seems logical. But Dagan first appeared in the middle Euphrates more than a thousand years before Samson started cutting down Philistines with the jawbone of a donkey. Since the Amorite kingdoms along the Euphrates were never based on fishing, the notion of a fish-god at the top of their pantheon just doesn’t fit. Dagan as a grain-god is more consistent with the evidence. In fact, the Semitic root for “grain” is dgn, which leads to a chicken-and-egg question: Was grain named for Dagan, or the other way around? 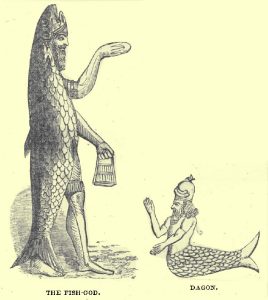 This is not Dagan (or Dagon). Image on the left is an apkallu, and the one on the right is a Sumerian merman.

In either case, Dagan was equated with the Hurrian god Kumarbi, who in turn was identified with El, Enlil, and with the Greek god Kronos, king of the Titans.[2] According to Greek myth, Kronos used a sickle to castrate his father, Ouranos, which, since sickles were used during the harvest, is more evidence that Dagan was likewise a grain-god.

One thing we do know: Dagan was very important in the ancient Near East, even if we don’t know much about his character. His cult may have been spread across the region in the twenty-fourth century BC by the great conqueror Sargon of Akkad, who led his troops from near modern Baghdad all the way to the Mediterranean. On the way, Sargon stopped to pay homage at the temple of Dagan in Tuttul, a city on the Euphrates about ninety miles northwest of Baghdad. Sargon’s grandson, Narām-Sîn, likewise credited Dagan with his military triumphs. And, since we’ve identified Dagan with Kumarbi, this might explain why Narām-Sîn chose to make an alliance with Urkesh, home of the abi, instead of conquering it outright.

This would be an interesting coincidence if I was a coincidence theorist. But since I’m not, I’ll point out that, in the previous chapter, we saw that the conquests of Sargon coincided with the elevation of Enlil, another identity of Dagan, Kumarbi and El, to supreme status among the gods of southern Mesopotamia. It appears that the ruling dynasty of Akkad credited “the” god with their military success.

We know that Dagan/Dagon was still worshiped by the Philistines more than a thousand years after Sargon, although how the god moved from the middle Euphrates to the Gaza Strip is still a mystery. In an earlier article, we described the recent discovery of a Neo-Hittite kingdom near ancient Antioch called Palistin. This nation seems to have flourished briefly at about the same time as the new Israelite kingdom ruled by Saul and David.[3] It appears that the branch of the Sea Peoples we call the Philistines, or a subset thereof, migrated from somewhere in the Aegean and set up a kingdom in what is now the border between Syria and Turkey. It lasted a short while at the beginning of the Iron Age, leaving behind only a place name for its successor state, Patin or Patina.[4]

The best-known king of Palistin was Taita, who left impressive statues of himself and Tarhunz (the Hittite name for the storm-god Hadad, better known to us as Baal in the Bible) at the temple of the Storm-God in Aleppo. The inscription on the statue of the king describes him as “King Taita, the Hero, the King of Palistin.” Given the cultural and religious cross-pollination between the Amorite lands of Lebanon and Syria to the south and southeast and the Hurrian and Hittite lands to the north, east, and northwest, it’s possible that this short-lived kingdom, located at the gateway from Mesopotamia to Anatolia, is where the Philistines first encountered Dagan/Dagon.

Palistin probably emerged from the chaos of the Bronze Age collapse around 1200 BC. That’s the term scholars use to describe a period of chaos in which the aforementioned Sea Peoples swarmed out of the Aegean, overran the Hittites, and destroyed most of the kingdoms in the eastern Mediterranean. One of those was Ugarit, which reached its peak around the time of the Exodus. Ugarit, just twenty miles south of Mount Zaphon, may have been part of the territory absorbed by the new state of Palistin. Oddly, though, while Dagan was named among the chief deities of Ugarit, he doesn’t appear at all in their myths. Dagan is mentioned only as the father of the king of the gods, Baal. 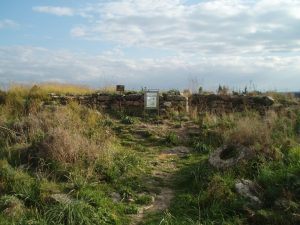 Ruins of the temple of Dagan at Ugarit

The puzzle is that Baal is also the son of Dagan’s counterpart in the Canaanite pantheon, the creator-god El. A number of theories have been floated to explain Baal’s dual parentage: El and Dagan were brothers, or El and Dagan played the roles of Ouranos and Kronos in an earlier version of the Greek myths, with Baal, a storm-god like Zeus, emerging as king of the pantheon.

Or maybe there’s a simpler answer: Dagan and El were one and the same.

This view is supported by the fact that KTU 1.118 and 1.47 have both El and Dagan sharing the same epithet, “father god” (ʾilib). Additionally, inscriptions at what most scholars consider the temple of Dagan at Ugarit make an identification very likely, the Mesopotamian pantheon identified both Dagan and El with the supreme god (Anu/Enlil), and at Ebla Dagan is the high god, also called “lord of Canaan.” […] [I]n the words of del Olmo Lete, “there can be no doubt that the equation of Ilu and Daganu expresses the process of cultural and cultic identification of two (Canaanite/Amorite) pantheons.” This fusion explains the dual reference to Baal’s parentage alongside the clear descriptions of his kinship with the other sons of El.[5]

So, we’ve connected Dagan, chief god of the Amorites who lived along the Euphrates, to Enlil, El, and Kumarbi. Our working theory is that this entity is one and the same with the chief of the rebel Watchers on Mount Hermon, Shemihazah. Under different names, this ambitious elohim occupied the top slot in the pantheons of people from the Persian Gulf to the Taurus Mountains, and from the Zagros Mountains of western Iran to the Mediterranean. And all of that territory factored into the early history of the Hebrews.

Next: The Lord of the Corpse

[2] This equivalence was noted by the Phoenician historian Philo of Byblos in the second century AD.