The Second Coming of Saturn Part 17: Lord of the Corpse 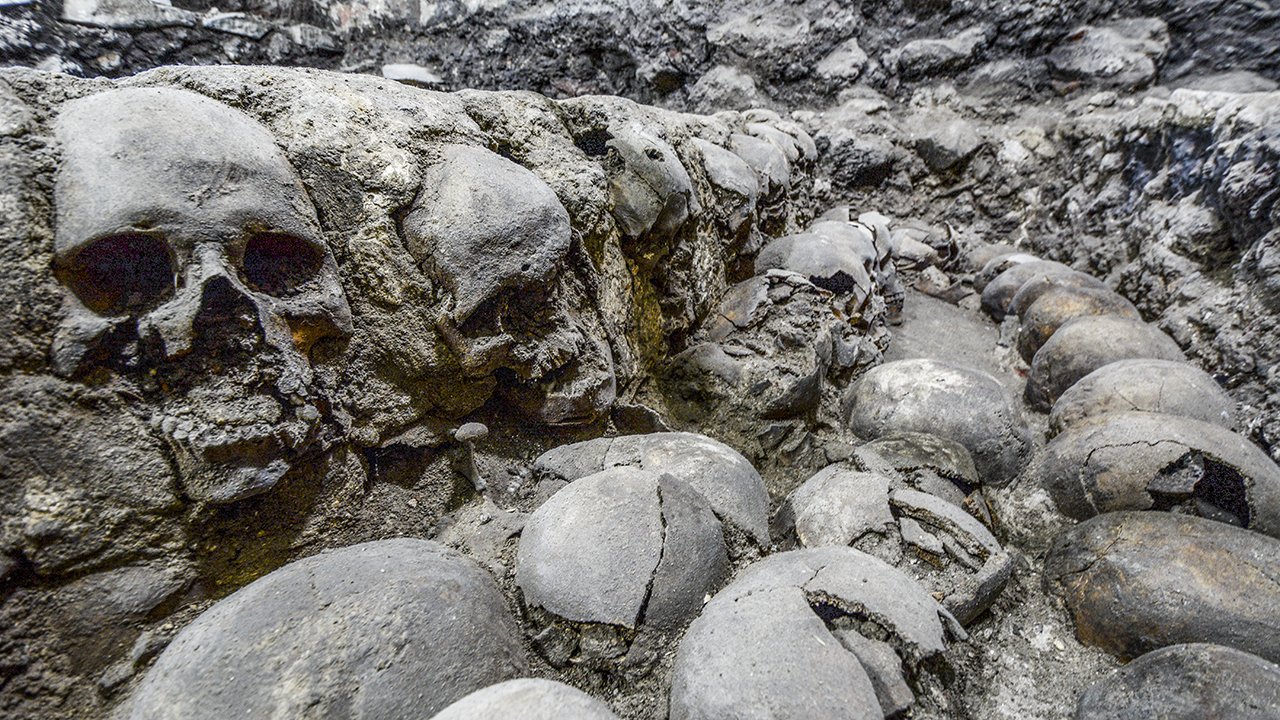 A key connection between Dagan and his other identities is the god’s link to the netherworld. One of Dagan’s epithets was bēl pagrê, which has been translated “lord of the dead,”[1] “lord of corpse offerings, lord of corpses (a netherworld god), lord of funerary offerings, and lord of human sacrifices.”[2]

Shamshi-Adad, the powerful Amorite king of northern Mesopotamia in the days of Hammurabi, once journeyed to Terqa, another important center of the Dagan cult located on the Euphrates River about fifty miles north of the modern border between Syria and Iraq. Shamshi-Adad arrived at Terqa on the day of the kispum and dedicated a bīt kispim(“house of the kispum”) to Dagan.[3]

But scholars can’t seem to agree on Dagan’s relationship to the netherworld or how he was honored. The Semitic root pgr behind the Akkadian pagrê is a cognate (same word, different language) for the Hebrew peger, which means “corpse” or “carcass.” Did the Amorites of Abraham’s day literally sacrifice humans to Dagan? It seems unlikely that something so outrageous slipped past the prophets without a mention. Still, there was a connection between Dagan and the dead,[4] and that’s the point. The living were required to make offerings to the dead, and Dagan played a role in the process.

Later, among the Philistines, Dagon (same god, but pronunciation shifted over the centuries) seems to have been important to fertility—both of crops and humans. The story begins with the Philistines capturing the Ark of the Covenant and bringing it home as a trophy for their god, installing it at the temple of Dagon in Ashdod:

The priests and diviners of the Philistines advised their leaders to send the ark back to the Israelites, but with a guilt offering to appease Yahweh:

They answered, “Five golden tumors and five golden mice, according to the number of the lords of the Philistines, for the same plague was on all of you and on your lords. So you must make images of your tumors and images of your mice that ravage the land, and give glory to the God of Israel. Perhaps he will lighten his hand from off you and your gods and your land.” (1 Samuel 6:4–5)

There are a couple of takeaways from this story—one obvious, one not so much. First, the collapse of the statue of Dagon two days in a row shows that it was not a coincidence. Its position, face down on the ground in front of the ark, was a clear sign that Yahweh was the superior God. And the idol’s decapitation and loss of its hands was an image that meant more back then than it does today; removing heads and hands of a defeated enemy was a common practice to simplify the body count after a battle.[5]

But the affliction of the Philistines and the guilt offering recommended by their diviners needs a little explaining. Some Bible commentators explain the Hebrew word ʿopalim (“tumors”) as a disease like bubonic plague. You may have heard “tumors” in 1 Samuel 5:6 rendered “emerods,” the word chosen by the King James Bible translators, or its modern form, “hemorrhoids,” as in the NAB. That’s a bit closer, but not quite specific enough. New archaeological finds at the sites of the Philistine cities has shed some light on this. It appears God hit the Philistines where it hurt—literally.

At Ashkelon, one of the most important cities of the ancient Levant, a cache of seven vial-shaped vessels called situlae was found in the mid 1990s. The small bronze artifacts bore representations of Egyptian-style gods. Based on their similarity to Egyptian imagery and cult practices, archaeologist Lawrence Stager “suggested that these vessels had a phallic connotation and were most probably associated with a cult of symbolic revivification.”[6]

Before we share a laugh at the expense of the Philistines, let’s explain the logic here. The word ʿopalim likely derives from the same root (ʿpl) that gives us the word Ophel, the name of a hill in southeast Jerusalem. The implied meaning—something high or raised up—could well be construed as a euphemism.[7] In addition, phallic-shaped vessels of this type are evidence of yet one more point of difference between the Philistines and the neighboring Israelites:

Quite obviously, the male reproductive organ is of importance in all human cultures. While such depictions are relatively common in Egyptian religious iconography, they are very rare in ancient Semitic religious and symbolic iconography. On the other hand, phallic symbolism is well known in early Greek cultures and occurs in various forms.

Taking into account that there are very few phallic representations in the ancient Near East, while, in contrast, they are common in Aegean/early Greek cultures, this would seem to have special significance regarding our understanding of Philistine culture. As is well known, it is highly likely that the Philistine culture (or at least, significant portions of it) originated in the Aegean cultural milieu.[8]

This connects the Philistines and their veneration of Dagon to our earlier discussion of the Anakim, the Hivites, and the other identities of this god, Enlil, El, and Kumarbi.

Like his other identities, Dagon/Dagan was believed to be the father of the gods.[9] Because many of the gods of the pagans were demons,[10] Dagan is linked to Shemihazah, chief of the “sons of God” who defiled themselves with human women and fathered the monstrous Nephilim and their demonic spirits. Those spirits, called ʿōberim (“Travelers”), were summoned through a kispum-like necromancy ritual to the threshing-floor of El on the summit of Mount Hermon to be “revivified.” This recalls the summoning of the Hurrians’ netherworld gods at the abi in Urkesh, the home of Kumarbi. That ancient ritual pit was connected to the ʾob of the Old Testament and the ʾoboth (“spirits of the dead”) who were summoned at those pits. If the Philistine idols were objects used by a cult of revivification, we have another point of contact between Dagon/Dagan and the matrix of ideas around the cult of the dead inspired by the spirits of the Watchers’ demonic offspring.

We mentioned in an earlier article that the Anakim were an elite class of warriors who ruled the hill country of Israel and Judah at the time of the Israelite conquest of Canaan. The summary of the war for Canaan in Joshua 11:21–22 makes it clear that defeating the Anakim was Joshua’s priority. The Anakim were of Greek origin, probably either Philistines or Hivites, who are mentioned in Genesis, Joshua, and Judges. It’s not a coincidence that, while the Anakim had been driven out of the hill country, “in Gaza, in Gath, and in Ashdod did some remain.”[11] Those cities, along with Ashkelon and Ekron, were the five urban centers of the Philistines who fought against Israel from the period of the Judges through the time of Saul and David. 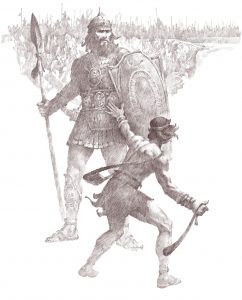 The Philistine giants were part of a demon-worshiping warrior cult

The Old Testament describes the battles fought by David and his men against four giants from Gath, Goliath’s hometown, all of whom are called “descendants of the giants.” This translation is misleading. The Hebrew phrase translated “descendants (or sons) of the giant(s)” is yel̆îdê ha-r̄āpâ—literally “sons of the rapha,” singular, indicated by the definite article ha (“the”) and rapha, the singular form of Rephaim.

The important thing to note is that the standard definition of yel̆îdê, “descendants,” is too narrow and literal. The Hebrew word yel̆îdê never referred to direct genetic lineage, a blood descendant, but instead designated “one who is born into the group by adoption, initiation or consecration,” and that “the second element in the phrase might then be the name of the group, or its emblem, or the name of the group’s patron, whether human or divine.”[12] In other words, the yel̆îdê ha-r̄āpâ—Sons of the Rephaim—were not oversized half-divine demigods but a warrior cult who worshiped the spirits of the Nephilim—and were very likely possessed by the demon spirits they worshiped.

As evidence, we submit the name of one of the giants slain by David and his men:

There was war again between the Philistines and Israel, and David went down together with his servants, and they fought against the Philistines. And David grew weary. And Ishbi-benob, one of the descendants of the giants, whose spear weighed three hundred shekels of bronze, and who was armed with a new sword, thought to kill David. But Abishai the son of Zeruiah came to his aid and attacked the Philistine and killed him. Then David’s men swore to him, “You shall no longer go out with us to battle, lest you quench the lamp of Israel.” (2 Samuel 21:15–17).

Ishbi-benob had a strange name. The etymology offered by Bible commentators usually something like “his dwelling is in Nob,” which was a village of the tribe of Benjamin near Jerusalem. But Ishbi-benob was from Gath, in Philistine territory near the Mediterranean coast. That’s nowhere near Jerusalem.

Author Brian Godawa suggested in his novel David Ascendant that we’ve been misspelling Ishbi’s name. Brian’s fiction is highly researched and theologically accurate. He suggests that the name of this Philistine giant should be “Ishbi ben Ob,” or “Ishbi, son of the ʾob”—son of the owner of a ritual pit, like the woman visited by Saul the night before he died in battle against the Philistines. (For his novel, Brian used some artistic license and made Ishbi the son of that woman. There’s no evidence in the Bible for that relationship, but it’s a fascinating idea.)[13]

The point of this rabbit trail is this: The “descendants of the giants” faced by David and his men were a Dagon-worshiping, demonic warrior cult.[14] The demons who led (or possessed) the group into which they were admitted “by adoption, initiation, or consecration” were created by Dagan/Shemihazah and his cronies.

The Bible’s repeated references to the Rephaim, Hermon, and Bashan point to this entity and the pivotal role he’s played in this long rebellion by the fallen elohim.

NEXT: THE MYSTERIOUS MT. HERMON INSCRIPTION

[13] David Ascendant is book 7 of The Nephilim Chronicles, which we recommend. For information, visit www.godawa.com.

[14] The closest equivalent in relatively modern history are the berserkers of the Viking era. They were believed to be impervious to pain, fatigue, fire, and edged weapons like swords and arrows, and they were so dangerous on the battlefield, even to their own side, that the Vikings were eventually compelled to outlaw berserker war bands.