The Second Coming of Saturn Part 19: The Prophesied Destruction of the Watchers 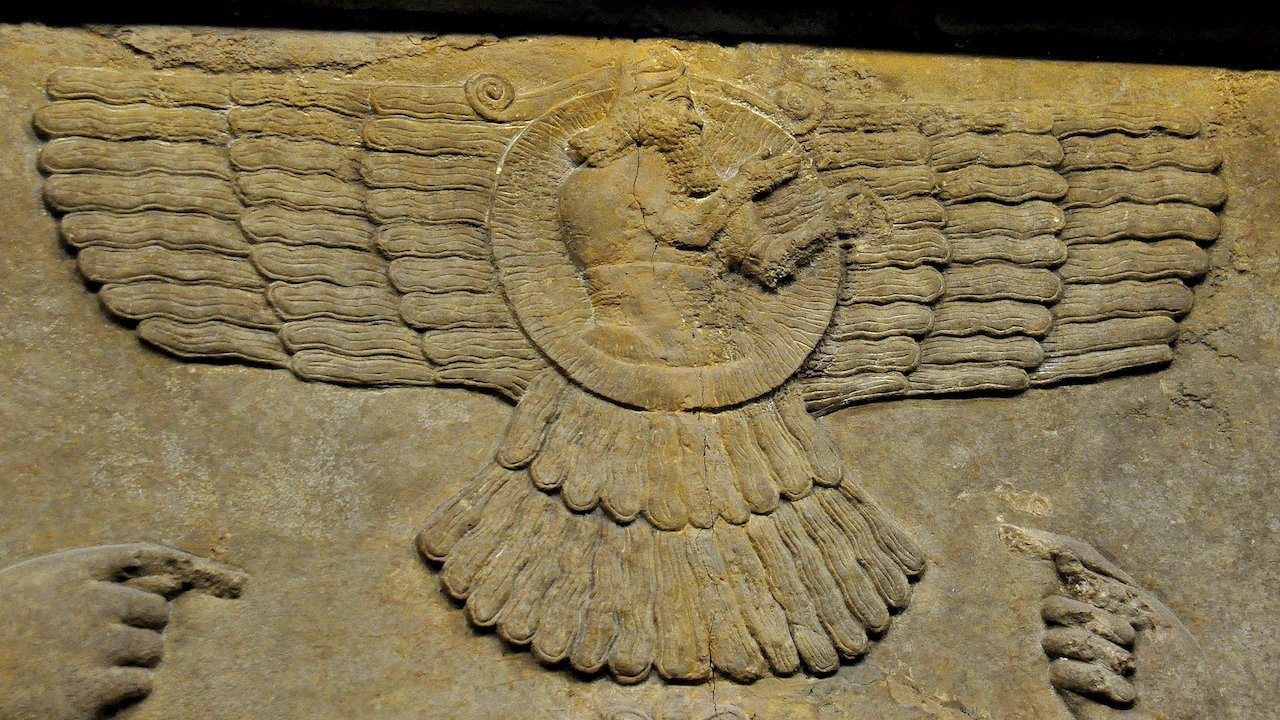 Assur from the Assyrian city of Nimrud

The Assyrian kingdom emerged as the dominant political and military power in the ancient Near East toward the end of the tenth century BC, shortly after the division of Israel into the northern kingdom, which retained the name of Israel, and the southern kingdom, Judah. For the next three centuries, Assyria extended its borders to include all of the Middle East, including Egypt and the eastern half of Anatolia (modern Turkey). It was during this period that the great king Sennacherib boasted of his conquests in Babylonia, mocking the “kingdoms of Enlil.”

We noted in a previous article that Enlil, the “Great Mountain,” was singled out for scorn by Yahweh, specifically in Zechariah 4:7 and in Ezekiel’s mentions of his vision of the throne room of God over Enlil’s home city, Nippur. Then there are the condemnations of “worthless idols” in Isaiah 2, Psalm 96, and Psalm 97 that may in fact be references to the minions of Enlil (Shemihazah), the ʾĕlîlim who made a pact to rebel with their chief at Mount Hermon. 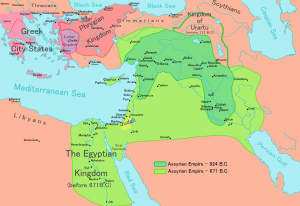 Neo-Assyrian empire at height of its power (click to enlarge)

The Assyrians tried to conquer the Levant for more than a century before the northern kingdom fell in 722 BC. The subsequent resettling of the bulk of the Israelite population outside of the kingdom of Judah left a profound scar on the Jewish psyche. Contrary to their almost exclusively negative depiction in the Old Testament, the Assyrians clearly thought quite highly of themselves and their patron god:

“Assur is king, Assur is king!” and, further on in the text, “May your (the king’s) foot in Ekur and your hands (stretched) toward Assur, your god, be at ease! May your priesthood (šangūtu) and the priesthood of your sons be at ease in the service of Assur, your god! With your straight sceptre enlarge your land! May Assur grant you a commanding voice, obedience, agreement, justice and peace!”… “Assur is king—indeed Assur is king! Assurbanipal is the […] of Assur, the creation of his hands. May the great gods establish his reign, may they protect the life [of Assurba]nipal, king of Assyria! May they give him a just sceptre to extend the land and his peoples! May his reign be renewed and may they consolidate his royal throne for ever!”[1]

“Assur is king, Assur is king!” We’ve heard that title before, and it’s no coincidence. By now, it’s been established that Assur was Enlil by a different name, and Enlil’s identity has been linked to El, Dagan, and Kumarbi, all of which were considered the creator, father of the gods, and/or king of the pantheon. No surprise, then, that this entity convinced his Assyrian worshipers to likewise call him “king.”

And since God directed His wrath at this entity under the names “El” and “Enlil,” even though it’s been hidden from us non-Hebrew speakers, it should likewise come as no surprise that God had choice words for Assur as well—although they, too, have been hidden by modern translations and our unfamiliarity with the world of the Hebrew prophets.

Of course, it doesn’t help that ʾaššūr in Hebrew can refer to the kingdom of Assyria or the small-g god Assur, depending on the context. This is admittedly somewhat speculative, but in the contexts of the verses we’ll cite below, given the evidence we’ve already presented about the significance of this supernatural rebel who would be king, what you’re about to read are prophecies of the ultimate destruction of this ancient enemy of God. 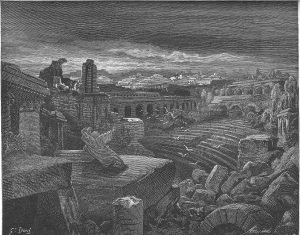 Did Isaiah see the fall of Babylon or the destruction of Babel, the “god-gate”?

Isaiah 14 is one of the most remarkable chapters in the Bible. It’s the source of the well-known verse, “How art thou fallen from heaven, O Lucifer, son of the morning! how art thou cut down to the ground, which didst weaken the nations!”[2] On the surface, the first part of the chapter is a polemic against the king of Babylon and a prophecy of that nation’s destruction. Bear in mind, however, that at the time Isaiah was inspired to write this verse, Babylon was a vassal state of Assyria. Shalmaneser V had destroyed Samaria and carried off the northern tribes of Israel only twenty or thirty years earlier, and it would be almost a century before the Chaldeans established the Neo-Babylonian Empire.

There is more going on in Isaiah 14 than a prophecy of the destruction of Babylon or mocking Satan, who was apparently reduced from his status in Eden to becoming the lord of the dead. (But note: We’ll argue in an upcoming article that Satan is not the subject of Isaiah 14 or Ezekiel 28. In other words, Lucifer is not Satan!)

Consider the odd description of the rebel from Eden in verse 19:

All the kings of the nations lie in glory,
each in his own tomb;
but you are cast out, away from your grave,
like a loathed branch,
clothed with the slain, those pierced by the sword,
who go down to the stones of the pit,
like a dead body trampled underfoot. (Isaiah 14:19, emphasis added)

What did the prophet mean by calling the rebel from Eden “a loathed branch”? Most English translations agree that the Hebrew word netser means “branch,” although a couple opt for “shoot.” The range of adjectives chosen by translators includes “loathed,” “repulsive,” “rejected,” “worthless,” and “abominable,” but they convey the same sense—someone or something utterly detestable. But even allowing for differences in culture and language over the last 2,700 years, the phrase “loathed/worthless/abominable branch” is odd.

The key is understanding that Isaiah didn’t use the Hebrew word netser; he employed a similar-sounding word from another language that was common enough to his readers to be understood:

[The] term is best explained as a loanword from the common Egyptian noun nṯr. Nṯr is generally translated “god,” but is commonly used of the divinized dead and their physical remains. It originally came into Hebrew as a noun referring to the putatively divinized corpse of a dead king, which is closely related to the Egyptian usage.[3] (Emphasis added)

The Egyptians regularly used the word nṯr, a homonym (a word that sounds the same as a completely different word) for netser, to describe Osiris, the Egyptian god of the dead. Given that Isaiah had just described the “Welcome to Sheol” party thrown by the Rephaim (the “shades” in Isaiah 14:9), calling him a “loathsome dead god” makes more sense than “loathed branch.”

Why a loanword from Egypt? The influence of Judah’s southwestern neighbor is evident in the book of Isaiah. The prophet warned Hezekiah not to trust in an Egyptian alliance to protect his kingdom (Isaiah 30:1–2, 31:1–3), which Isaiah called “a covenant with death” (Isaiah 28:15). However, recently discovered seals from King Hezekiah feature the image of a scarab (dung beetle), a sacred symbol in Egypt.[4] So, borrowing an Egyptian word would not have been unusual for Isaiah, especially given the poor opinion he had of Judah’s neighbor.

The adjective translated “abhorred” or “abominable,” Hebrew taʿab, is significant. It modifies the noun netser, which would normally have a positive connotation. In this context, taʿab may suggest “ritually impure.”[5] Isaiah made a profound declaration here about the rebel from Eden: The “loathed branch” was actually an “unclean god,” the status of the divine rebel after he was kicked out of Eden.

What makes Isaiah 14 even more fascinating is another loanword, this time from Aramaic, a few verses further on:

May the offspring of evildoers
nevermore be named!
Prepare slaughter for his sons
because of the guilt of their fathers,
lest they rise and possess the earth,
and fill the face of the world with cities. (Isaiah 14:20b–21)

Now, God is not opposed to cities as such. He inspired Nehemiah, Ezra, Zerubbabel, and others to rebuild Jerusalem and its walls. So, how do we understand this?

Here’s the key: The Hebrew word for “city” is ʿiyr. In Aramaic, the very same word means “Watcher.” The plural forms are ʿiyrim and ʿiyrin, respectively. Thanks to Dr. Michael S. Heiser, we have a good example of an Aramaic word that was imported into the Bible and then corrected with the -im plural suffix, transforming naphil(a)(“giant”) into nephilim, according to Hebrew rules of word formation.[6]

You can see right off how that would change the passage above in an important way:

Prepare slaughter for his sons
because of the guilt of their fathers,
lest they rise and possess the earth,
and fill the face of the world with [Watchers]. (Isaiah 14:21, emphasis added)

That puts a new spin on the whole chapter. Isaiah may have intended to record God’s judgment against the offspring of the rebel angels on Hermon, the Watchers, and their progeny, the Nephilim. A similar prophecy was uttered by the prophet-for-prophet, Balaam:

[A] star shall come out of Jacob,
and a scepter shall rise out of Israel; […]
And one from Jacob shall exercise dominion
and destroy the survivors of [Watchers]! (Numbers 24:17b, 19; emphasis added)

I stumbled onto this new reading of Isaiah 14 while researching my 2018 book, Last Clash of the Titans. At the time, I understood the passages cited above as the prophesied destruction of Lucifer/Satan and the Rephaim (i.e., the Nephilim). The cities/Watchers swap opens another dimension of understanding for Isaiah 14 and Numbers 24, too.

Obviously, we can’t substitute “Watchers” for every occurrence of “cities” in the Old Testament. Most of the time, ʿiyrim means “cities.” But in the passages above, translating the word as “Watchers” fits the context better.

And in Isaiah 14, the fit is better yet if we consider that the chapter, contrary to the long-held consensus, doesn’t refer to Lucifer/Satan at all, but was directed instead at another supernatural rebel: Assur.

Next: Lucifer is Not Satan