The Second Coming of Saturn Part 22: Mount of the Destroyer 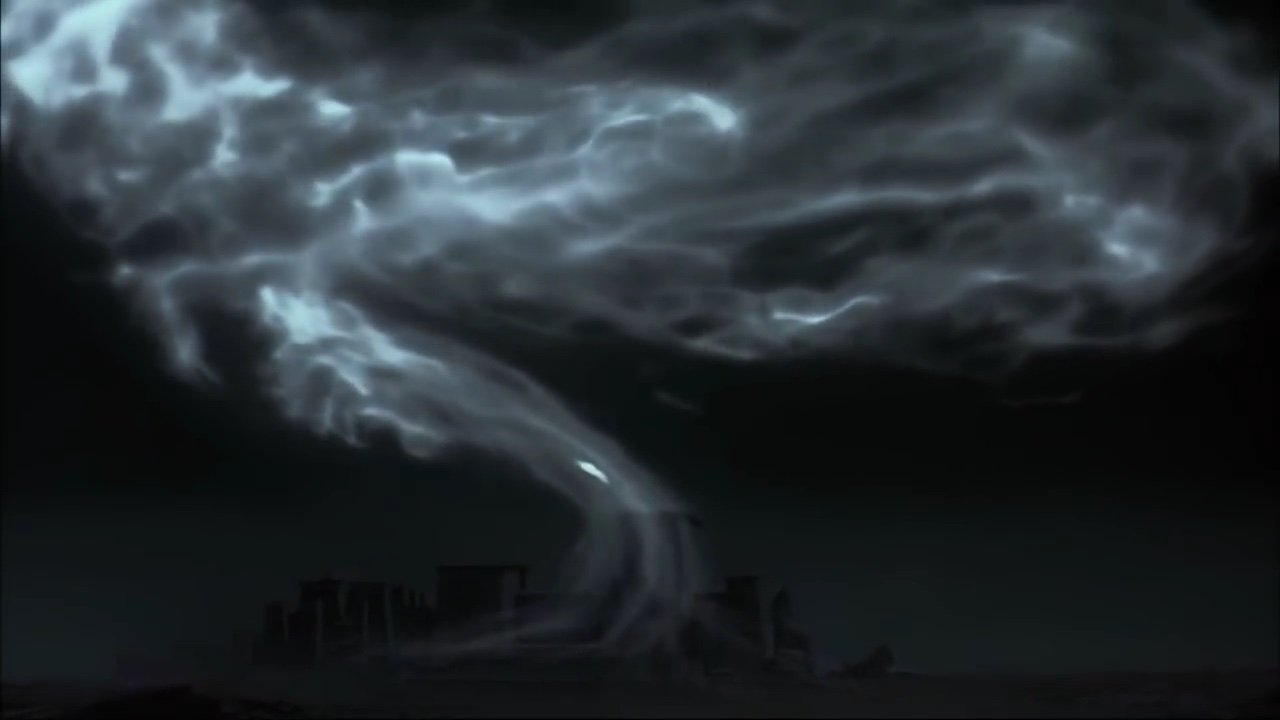 Even though he’s been imprisoned in the abyss since the Flood of Noah, Milcom/Molech has continued to exercise his considerable supernatural power on the earth. Through the foreign wives Solomon collected during his reign, the dark god influenced Solomon to build a high place for him that overlooked the Temple Mount:

For when Solomon was old his wives turned away his heart after other gods, and his heart was not wholly true to the Lord his God, as was the heart of David his father. For Solomon went after Ashtoreth [Astarte] the goddess of the Sidonians, and after Milcom the abomination of the Ammonites. So Solomon did what was evil in the sight of the Lord and did not wholly follow the Lord, as David his father had done. Then Solomon built a high place for Chemosh the abomination of Moab, and for Molech [Milcom] the abomination of the Ammonites, on the mountain east of Jerusalem. (1 Kings 11:4–7)

The mountain east of Jerusalem can only be the Mount of Olives, which rises nearly three hundred feet above the Temple Mount. Solomon probably built those high places after 950 BC, and they stood for about three centuries until the time of King Josiah, who reigned from about 640 BC until his death in 609 BC: 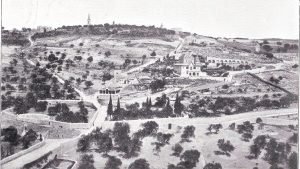 Note the name given to the Mount of Olives by the author of 2 Kings: The Mount of Corruption. The Hebrew word rendered “corruption,” mašḥîṯ (pronounced mash-kheeth’), means “destruction.” But the Hebrew text reads har ha-mašḥîṯ, which more precisely means “Mountain of the Destroyer.”[1] That’s a very different sense of the mountain’s name and the god who was worshiped there.

Mašḥîṯ is used twice in the Old Testament to identify a supernatural entity charged with exterminating large groups of people. In Exodus 12:23, “the destroyer” (ha-mašḥîṯ) passes through the land of Egypt to take the lives of the firstborn. Second Samuel 24:16 and the parallel passage in 1 Chronicles 21:15 describe the Angel of Yahweh as the mal’ak ha-mašḥîṯ, the “destroying angel.”

He must have been a terrifying sight; David and the elders of Israel, on seeing the Angel of Yahweh “standing between earth and heaven, and in his hand a drawn sword stretched out over Jerusalem,” threw themselves to the ground, face down.[2]

However, it’s unlikely that the faithful priests and chroniclers who condemned Solomon’s pagan high places would describe them with a term that specified the Angel of Yahweh, who was “the second power in heaven,” the pre-incarnate Christ.[3]

Now, here is where things get weird: While it appears that three gods were honored by Solomon on the Mount of Olives, it may only have been two. Sir Charles Warren, the British archaeologist mentioned in an earlier article, was instrumental in finding the pieces of what we call the Moabite Stone, or the Mesha Stela. It describes the political situation between Moab and the divided kingdoms of Israel and Judah in the time of King Jehoshaphat and the prophet Elisha, sometime around 850 BC:

And Chemosh said to me, “Go, take Nebo from Israel!” So I went by night and fought against it from the break of dawn until noon, taking it and slaying all, seven thousand men, boys, women, girls and maid-servants, for I had devoted them to destruction for (the god) Ashtar-Chemosh. And I took from there the […] of Yahweh, dragging them before Chemosh.[4]

This account of the slaughter of Nebo, which was probably at or near where Moses got his only look at the Promised Land, is similar to the treatment Joshua and the Israelites gave to the Amorite cities declared khērem (“under the ban”), a phrase usually translated into English as “devoted to destruction” or “annihilated.” The sense of the word is hard for us in the modern West to grasp because we aren’t taught that things can be so sacred or set apart that just touching them is punishable by death. For example, the first use of the word khērem in the Bible is in Exodus 22:

Whoever sacrifices to any god, other than the Lord alone, shall be devoted to destruction. (Exodus 22:20, emphasis added)

It’s not a coincidence that khērem is the root word behind the name “Hermon,” the mountain where Shemihazah and his fellow Watchers began their rebellion, and where the pagan Amorites believed their creator-god El held court with his consort and their seventy sons.

The Mesha Stele confirms that Chemosh and his followers understood the concept of khērem. And that’s not all. Before the slaughter of the Israelites of Nebo, this happened:

When the king of Moab saw that the battle was going against him, he took with him 700 swordsmen to break through, opposite the king of Edom, but they could not. Then he took his oldest son who was to reign in his place and offered him for a burnt offering on the wall. And there came great wrath against Israel. And they withdrew from him and returned to their own land. (2 Kings 3:26–27)

Verse 27 can be a difficult verse for Jews and Christians to understand. Why, after the prophet Elisha told the kings of Judah, Israel, and Edom that God would grant them victory, was there “great wrath against Israel”? And did the wrath come from Yahweh or Chemosh? The most likely explanation is this: God’s anger was directed at the armies of Judah and Israel for losing faith in His ability to deliver on His promise.

The shocking detail in that passage, of course, is that Moab’s King Mesha believed that his god, Chemosh, accepted child sacrifice. Does this identify Chemosh as Molech, and thus another name or epithet of El? Not necessarily, but it demonstrates the nature of the gods who have rebelled against their Creator. Human blood is evidently part of their diet.

The other point we need to emphasize from the Mesha Stele is the identification of Chemosh and Ashtar, an alternate spelling of Attar (the male war-god aspect of Astarte), as a single entity. 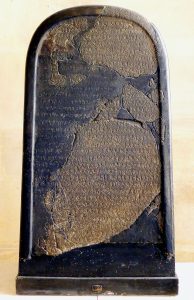 How can that be? Well, trying to pin down precise correlations between the gods and goddesses of the ancient world is a good way to drive yourself crazy. They change names and genders over the centuries—and besides, they lie. It’s possible that the names of these deities are, at least in some cases, more like job titles than proper names. For example, in the Hebrew Old Testament, Satan is actually “the satan” (i.e., “the adversary” or “the accuser”).

So, did Chemosh take on the mantle of “the attar” (the war-god) at some point after Israel established itself in Canaan? About that time, the violent, male side of Astarte, the war-god Attar/Ashtar, was deemphasized if not entirely split from her character. By the time she became “Aphrodite” of the Greeks and Venus of the Romans, the warlike aspect of her personality was nearly gone, maybe set aside in favor of emphasizing her identity in the Western world as the Queen of Heaven.[5]

The point of this rabbit trail is to suggest that Astarte and Chemosh (Aphrodite and Ares to the Greeks, Venus and Mars to the Romans) may be alternate aspects of the same supernatural entity. We’re dealing with entities who operate in more dimensions than we can perceive. The sex-goddess/war-god personalities may be finger puppets manipulated by a single entity who finds the alternate identities useful for her/his/its devious schemes.

This is speculative, but I bring it up because of the influence of both entities since the dawn of human history. Inanna/Ishtar, also known to us as Astarte, Aphrodite, and Venus, among other names, was one of the most prominent and powerful entities of ancient Mesopotamia. As the Queen of Heaven, this entity has deceived millions for at least five thousand years—down to the present day, in fact, in the form of the cult of the Virgin Mary.[6]

Meanwhile, the war-god Attar has shed blood around the world through his followers in what will become the world’s largest religion within the next fifty years, Islam.[7] During Muhammad’s rise to power in the early seventh century, there were only three gods in Arabia who’d survived from ancient Mesopotamia—the astral triad of sun, moon, and Venus. That included the male war-god, Attar, who was the only one of the more than one hundred deities in southern Arabia (modern Yemen and Oman) worshiped by every tribe in the region.[8]

I argued in my book Bad Moon Rising that Allah of the Muslims is not a single entity but a collective or corporation made up of the old Mesopotamian gods who’d been caught offguard by the resurrection of Jesus—namely, El or Enlil (from Arabic al-ilah, “‘the’ god”); Hadad, the storm-god (Baal in the Bible, but better known as Satan);[9] Inanna/Ishtar; Chemosh/Attar, the war-god; Sîn, the moon-god; Shamash, the sun-god; and Resheph, the plague-god called Nergal in Babylon and Apollo by the Greeks and Romans.

Of that group, only El (Milcom/Molech) is in the abyss right now. The others were among the later group of bene ha’elohim placed over the nations after Babel. That suggests that the old god still has influence with the second wave of rebellious sons of God.

It’s my belief that the entity called El, Enlil, Dagan, Saturn, or simply “king” (Molech/Milcom) is tremendously powerful, maybe even more powerful than Satan—when he’s not wearing chains in the abyss.

[9] Jesus specifically identifies Baal (Beelzebul = “Baal the prince”) as Satan in Matthew 12:22–26, and names Pergamum as the place “where Satan dwells” in Revelation 2:13. That’s a reference to the Great Altar of Zeus, who was the Greek form of Baal.