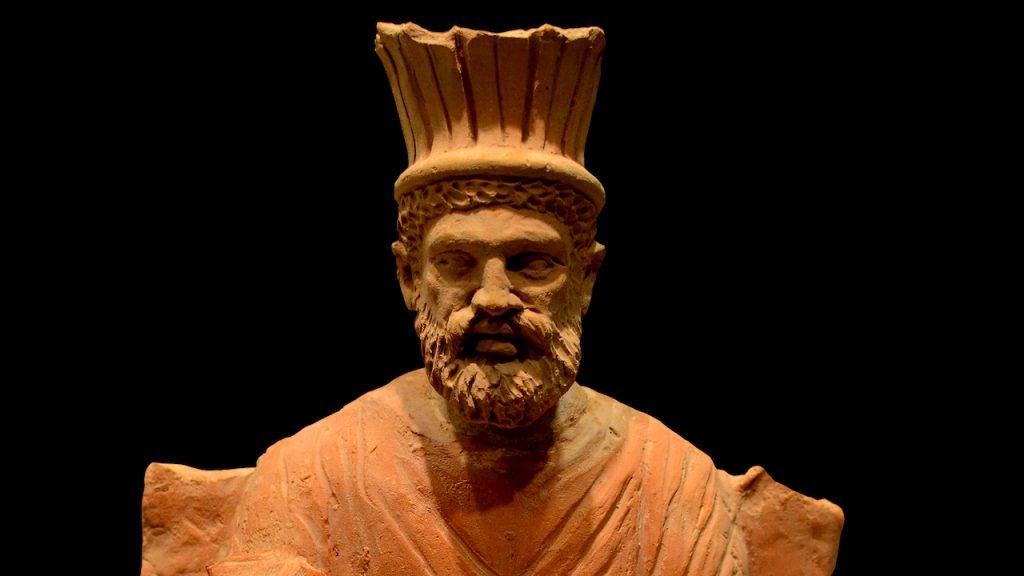 The Phoenicians are remembered as the sailors par excellence of late antiquity, descendants of the Amorites who spread out from the city of Tyre to establish colonies all around the Mediterranean. Their ships circumnavigated Africa, reached Britain, and may even have traveled as far as the Americas.

Less well known to us today, however, is that the Phoenicians, in the service of their chief god Baal Hammon, continued the horrific practice of child sacrifice into the Christian era.

According to Diodorus Siculus, a Greek historian of the first century, there was even a black-market trade in children to sacrifice to the god:

In former times they (the Carthaginians) had been accustomed to sacrifice to this god the noblest of their sons, but more recently, secretly buying and nurturing children, they had sent these to the sacrifice.[1]

Diodorus identified the god of Carthage as Kronos, king of the Titans. The Romans knew him as Saturn, but the Carthaginians called him Baal Hammon. Given that you’ve made it this far into our series, you won’t be surprised to learn that this entity was also known as the Canaanite creator-god, El.

There is now overwhelming evidence identifying Bʿl Hmn of Zincirli and Bʿl Hmn of the western Punic colonies with Canaanite ʿEl. As a matter of fact, both the epithets Bʿl Hmn and Tnt (his consort) survived only on the peripheries of the spread of Canaanite culture, a mark of archaism comparable to the survival of linguistic archaism at the frontiers of the spread of a family of languages.

Philo Byblius, and other classical sources, and inscriptions in Greek and Latin all establish the formula that Bʿl Hmn on the one hand, and ʿEl on the other, are Greek Kronos, Latin Saturnus. These equations have long been known, and all new data confirm the ancient. Moreover, we now perceive the significance of the epithets gerontis used of the Kronos of Gadir (Cadiz), senex used of Saturnus of New Carthage, and, indeed, of the epithet saeculo [frugifero] used of the African Saturnus. They reproduce ʿEl’s appellation ʿôlām, “the Ancient One.”[2]

It’s no coincidence that this epithet of El is similar to one you’ve heard for Yahweh, “Ancient of Days.” Skeptics take this as evidence that Yahweh was El, and the Hebrews simply changed his name and adopted his cult. We disagree; Yahweh and El are separate and distinct.

The connection between the epithets of Kronos, Saturn, and El, all variations on “old,” “aged,” or “the Ancient One,” may lead us to another connection with an entity we mentioned in an earlier article:

[A] mine inscription, owing to a poor facsimile, had been misread and hence remained undeciphered. It reads ʿldʾlm, ʿif ḏū ʿôlami, “El, the Ancient One” or “‘El, lord of Eternity.”[3]

Could this link El—and thus Baal Hammon, Kronos, and his other manifestations—to Rapi’u, the underworld god who reigned at Ashtaroth and Edrei? Some think so. Respected scholar Frank Moore Cross, for example, translated the phrase rapi’u malk ‘ôlami from Ugaritic text KTU 1.108 as an epithet of El (“the Hale One, eternal king”) rather than “Rapi’u, King of Eternity.”

It is probable that the name Baal Hammon means “Lord of the Amanus,”[4] which refers to a mountain range in southern Turkey just northeast of Mount Zaphon, the mountain sacred to Baal. The Amanus, today’s Nur Mountains (from the Turkish Nur Dağları, “Mountains of Holy Light”), run alongside the Gulf of Iskenderun at the northeastern corner of the Mediterranean Sea, just north of Antakya (ancient Antioch). Zincirli, mentioned above, is the site of ancient Sam’al, about seventy miles north of Antakya. It controlled the northern pass through the Amanus mountains, while Kinalua, capital city of the kingdom of Palistin, about fifteen miles southeast of Antakya, guarded the southern pass. 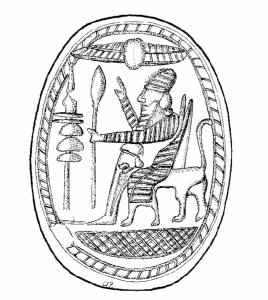 Scarab of Baal Hammon seated on a sphinx beneath winged solar disc found at Tharros, Sardinia.

To be clear, Baal Hammon is not the Baal of the Bible. That was the storm-god, whose proper name was Hadad, Adad, or Addu, depending on where it was written. “Baal” simply means “lord,” and it was used by the Canaanites and Phoenicians the same way we Christians call our God “Lord” instead of “Yahweh.”

But Baal Hammon’s mountains, the Amanus, are only about seventy miles north of Mount Zaphon, home of the storm-god’s palace—a mountain that was probably dedicated to El (Baal Hammon) before it became sacred to Baal (Hadad).

The worship of Baal Hammon continued until well into the Christian era. The Phoenicians built a maritime trading empire unrivaled in the ancient world that lasted from about the time of Ahab and Jezebel in the ninth century BC until the end of the Third Punic War in 146 BC, when Carthage was finally destroyed by Rome. The colony at Carthage was founded by Phoenicians from Tyre in what is modern-day Tunisia. As the Phoenicians extended their influence across the Mediterranean through settlements and trading outposts on the North African coast, southern Spain, and islands like Sicily and Sardinia, the worship of Baal Hammon spread as well. It appears the god and his consort, Tanit, became the supernatural power couple of Carthage around 480 BC, when a disastrous military defeat on the island of Sicily led to the colony’s break with its home city, Tyre.[5]

Tanit, sometimes rendered Tannit or Tinnit, was the Carthaginian version of the goddess Asherah,[6] although some scholars connect Tanit to the other great goddesses of the Canaanite pantheon, Astarte and Anat.[7] But since most scholars accept that Baal Hammon and El are one and the same, identifying Tanit as Asherah is probably correct. 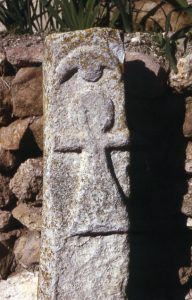 Symbol of Tanit on stela found at the tophet of Carthage. Note that it’s similar to the keyhole shape of the abi (ritual pit) at ancient Urkesh.

The etymology of her name is interesting, to say the least. “Tanit” is a feminine form of the Canaanite/Phoenician tannin, which means “serpent” or “dragon.” Thus, “Tanit” is literally “Serpent Lady” or “Dragon Lady.”[8] This supports her identification as Asherah, whose epithets rabbat ʿatiratu yammi (“Lady Who Treads on the Sea[-dragon]”)[9] and ḏt bṯn (“Serpent Lady”)[10] are virtually identical.

Tanit was sometimes called Qudšu (“the Holy One”),[11] and she was known by this name in Egypt as well as the Levant from about the time of Jacob through the time of the judges (about 1800–1200 BC). In Egyptian art, she’s usually shown holding snakes in one or both hands.[12]

It’s probably not a coincidence that bṯn is the Ugaritic form of “Bashan,” the land at the foot of Mount Hermon ruled by Og in the days of Moses. The epithet ḏt bṯn could therefore be read, “Lady of Bashan.” (It also means that Bashan literally translates as “Place of the Serpent.”)

While scholars don’t completely agree on the identities and origins of Baal Hammon and Tanit, it is clear that the two, like Kronos, Saturn, and Molech, required a most precious sacrifice from worshipers—their children. In recent years, some scholars have tried to downplay the biblical accounts of child sacrifice, suggesting that they were invented by the Hebrew prophets to justify the conquest of Canaan and rationalize the destruction of Jerusalem and the Temple by Babylon. And God, speaking through the prophets, was very clear about His opinion of child sacrifice:

You shall not give any of your children to offer them [literally, “to make them pass through (the fire)”] to Molech, and so profane the name of your God: I am the Lord. […] Do not make yourselves unclean by any of these things, for by all these the nations I am driving out before you have become unclean, and the land became unclean, so that I punished its iniquity, and the land vomited out its inhabitants. (Leviticus 18:21, 24–25)

[Manasseh] burned his son as an offering and used fortune-telling and omens and dealt with mediums and with necromancers. He did much evil in the sight of the Lord, provoking him to anger.[…] And the Lord said by his servants the prophets, “Because Manasseh king of Judah has committed these abominations and has done things more evil than all that the Amorites did, who were before him, and has made Judah also to sin with his idols, therefore thus says the Lord, the God of Israel: Behold, I am bringing upon Jerusalem and Judah such disaster that the ears of everyone who hears of it will tingle.” (2 Kings 21:6, 10–12)

For the sons of Judah have done evil in my sight, declares the Lord. They have set their detestable things in the house that is called by my name, to defile it. And they have built the high places of Topheth, which is in the Valley of the Son of Hinnom, to burn their sons and their daughters in the fire, which I did not command, nor did it come into my mind. Therefore, behold, the days are coming, declares the Lord, when it will no more be called Topheth, or the Valley of the Son of Hinnom, but the Valley of Slaughter; for they will bury in Topheth, because there is no room elsewhere. (Jeremiah 7:30–32)

But the prophets weren’t alone in their condemnation of the Amorite-Canaanite-Phoenician practice of child sacrifice. Greeks and Romans were appalled by it as well.

We’ve already shared the nightmarish account of Plutarch, who described how the poor of Carthage sold their children to be sacrificed by those with no children of their own. But the wealthy were not exempt from burning their children; according to Diodorus Siculus, the citizens of Carthage responded to a disastrous military defeat in 310 BC to Agathocles, ruler of the Sicilian city-state of Syracuse, by slaughtering hundreds of their children:

Therefore the Carthaginians, believing that the misfortune had come to them from the gods, betook themselves to every manner of supplication of the divine powers.… They also alleged that Kronos [Baal Hammon] had turned against them inasmuch as in former times they had been accustomed to sacrifice to this god the noblest of their sons, but more recently, secretly buying and nurturing children, they had sent these to the sacrifice; and when an investigation was made, some of those who had been sacrificed were discovered to have been supposititious [substitutions].… In their zeal to make amends for their omission, they selected two hundred of the noblest children and sacrificed them publicly; and others who were under suspicion sacrificed themselves voluntarily, in number not less than three hundred.[13]

Next: A Phoenician monument to child sacrifice