The Second Coming of Saturn Part 26: The Child-Eaters 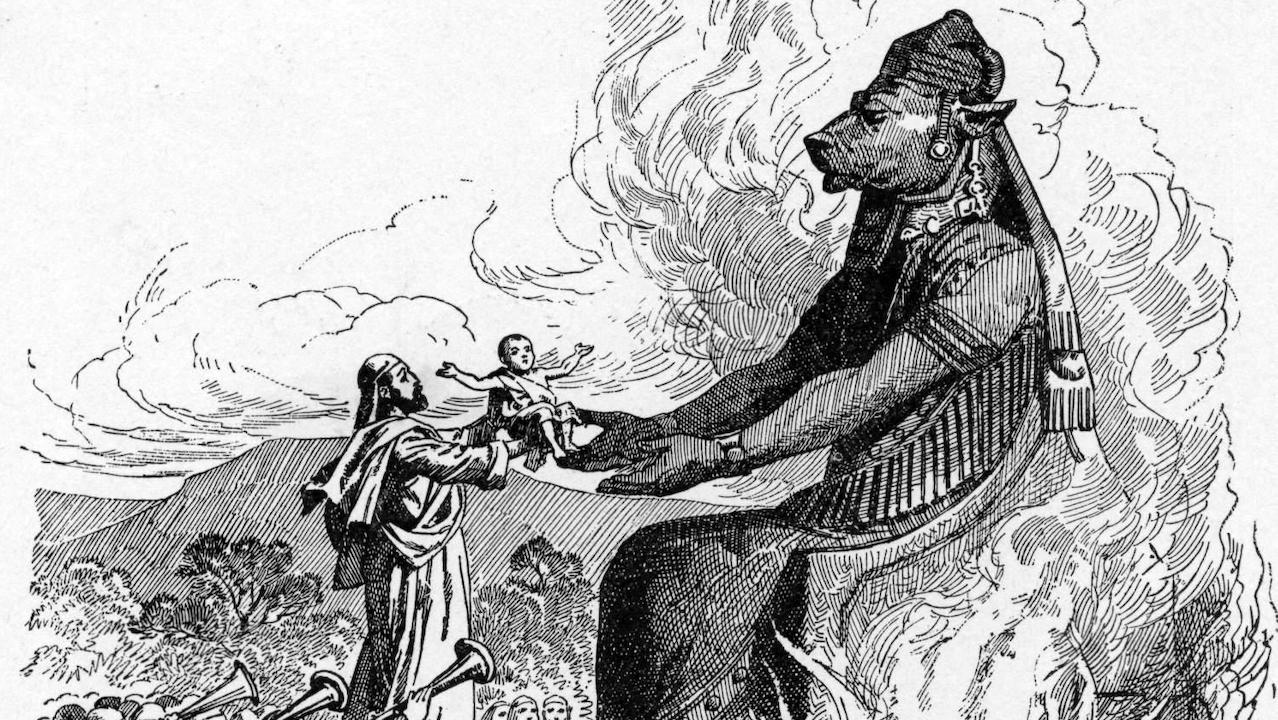 The first-century Greek historian Diodorus Siculus is one of primary sources for the horrors of the Phoenicians who founded Carthage. He provides the most graphic description of how their child sacrifice was performed:

There was in their city a bronze image of Kronos, extending its hands, palms up and sloping toward the ground, so that each of the children when placed thereon rolled down and fell into a sort of gaping pit filled with fire.[1]

This is probably the inspiration for fanciful renderings you may have seen of an idol called “Moloch,” an alternate spelling of “Molech,” “Molek,” and “Malik.”[2] The truth is we don’t know what the bronze idol of Baal Hammon looked like. It’s possible that the artist’s depiction of Moloch was inspired by the Greek myth of the Minotaur, the cannibalistic half-bull, half-man who was confined to the labyrinth on the island of Crete.[3] The images of Baal Hammon that have survived the last two thousand years depict a bearded man—although, as noted in a previous article, the name of his alter ego Kronos probably derives from the Semitic word for “horns.”

If we’ve learned only one thing from the political situation in the United States since 2016, it’s that the media promotes a narrative, and stories are shaped to fit that narrative. This was also true two thousand years ago. So, some modern archaeologists prefer to believe that the Hebrew, Greek, and Roman commentators who offered their opinions of Canaanite and Punic religion were biased against a rival culture, and the claims of infanticide were essentially political propaganda. It’s claimed that the high rate of infant mortality in the ancient world would have made regular child sacrifices impossible. Any society engaging in such a practice, it’s argued, would collapse by elevating its death rate above the birth rate.[4] They argue that the children buried at Phoenician settlements around the Mediterranean simply died of natural causes, and for some as yet undiscovered reason the Phoenicians set aside special burial grounds for deceased children. For lack of better, archaeologists have borrowed the biblical word “tophet” to describe these sites. 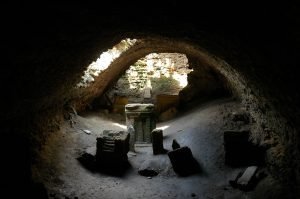 Stelae at the Carthage tophet

It’s an imprecise use of the term. The Hebrew word topheth literally means “place of fire,” a reference to the practice of burning children as offerings to Molech. The horror of the Topheth led Jews to use the Valley of the Son of Hinnom, where these sacrifices took place, as a symbol for the place of eternal torment for the wicked. The name in shortened form, gei hinnom (“Valley of Hinnom”), became Gehenna in Greek, and it’s usually translated “hell” in the New Testament.

However, the revisionist arguments just don’t hold up. Analysis shows that the Phoenicians could have sacrificed as many as all of their firstborn children, or up to one-third of their baby girls, without affecting their society in a significant way.[5]

The physical evidence that has so far escaped archaeologists in Israel has turned up in numerous places around the Mediterranean. Tophets similar to the one described in the Bible have been found at Carthage and nearby Phoenician sites in modern Tunisia and Algeria, at Motya on Sicily, and at Monte Sirai, Nora, Tharros, and Sulcis on Sardinia.[6]

But what may be the most disturbing pieces of evidence comes from Spain, carved into a stone relief on a Punic funerary monument constructed around 500 BC:

The relief depicts a banquet prepared for a monster that sits, facing the left part of the image. The monster has a human body and two heads, one above the other. The heads have open mouths with lolling tongues. In its left hand it holds the rear leg of a supine pig lying on a banquet table in front of it. In its right hand, it holds a bowl. Just over the rim of the bowl can be seen the head and feet of a small person. In the background, a figure in a long garment raises a bowl in a gesture of offering. Opposite the monster is the mutilated image of a third figure. It is standing and raising in its right hand a sword with a curved blade. Its head is in the shape of a bull or horse. Its left hand is touching the head of a second small person in a bowl on a second table or a tripod near the banquet table. The funerary tower on which this relief is carved comes from an area that, in the period of its construction, was clearly subject to Punic or Phoenician influence and resembles monuments from Achaemenid western Asia. The relief itself resembles eastern Mediterranean depictions of offerings or sacrifices, and the sword with the curved blade, associated with sacrifice, supports the resemblance. It appears that the small figures, most likely children, are being offered in bowls to the two-headed monster. Accordingly, it is reasonable to believe that the relief, however imaginatively, represents Northwest Semitic child sacrifice.[7] 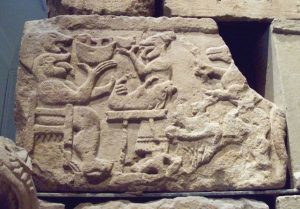 Detail of the Monument of Pozo Moro, built at the end of the 6th century BC (click to enlarge)

While it’s unquestionably frightening, it’s difficult to interpret exactly what the relief represents. It’s not exactly the type of funerary monument we’re accustomed to in the modern world. Charles Kennedy, who studied the monument not long after its discovery in 1971, believes it represents the offering of infants to Death; that is, Molech.[8] George Heider, in his groundbreaking book on Molech, agrees: “The Pozo Moro tower relief is as close as we are ever apt to come to a photograph of the ancient cult in action, and it shows child sacrifice clearly enough, if nothing else.”[9]

Even so, the debate continues. Some scholars see nothing unusual in the special burial sites the Phoenicians set aside for infants and young children.[10] Others argue that the Pozo Moro mausoleum depicts neither children nor sacrifice.[11] However, a recent analysis of teeth retrieved from 342 burial urns at Carthage, where the largest tophet contains more than twenty thousand such urns,[12] revealed that infants under the age of three months were significantly over-represented, meaning—to put this nicely—they did not die of natural causes.[13] 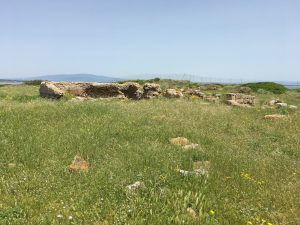 Phoenician parents couldn’t have been heartless, unfeeling monsters. Even an unfriendly witness like Plutarch noted that poor mothers who sold their children as substitute offerings for the children of the wealthy were compelled to keep from showing grief during the sacrifice by the threat of losing their fee. No, there was something more at work here—something spiritual.

Diodorus reported that the Carthaginians believed their military defeat to the tyrant of Syracuse, Agathocles, in 310 BC was punishment for failing to provide the required sacrifices to their chief god, Baal Hammon. To atone, the city slaughtered some five hundred of its children. Why? Why would a Watcher-class angel demand child sacrifice from his human followers? There are a couple of possible reasons, but because the Bible doesn’t tell us specifically, they are both speculative.

First, we know from Genesis 9 that “the blood is the life.” God forbade consuming blood; further, He declared that for the shedding of human blood—even by animals—a reckoning would be required. Maybe the shedding of blood produces something the Fallen uses for supernatural power.

Second, this may be simple revenge. The Watchers witnessed the deaths of their children, the Nephilim, in the Flood of Noah. Maybe convincing humans that sacrificing children brings supernatural blessing from the gods was an act of retribution. Imagine how God the Father feels as He watches us willingly slaughter the most vulnerable and helpless among us, the children in our care, to win the favor of our older siblings, the angelic children of God who rebelled against Him.

We don’t have to imagine. God told us exactly how He feels about it more than 2,500 years ago:

And you took your sons and your daughters, whom you had borne to me, and these you sacrificed to [the gods] to be devoured. Were your whorings so small a matter that you slaughtered my children and delivered them up as an offering by fire to them? (Ezekiel 16:20–21)

In short, because Israel and Judah worshiped other gods, which Yahweh compared to a faithless wife cheating on her husband, He declared that judgment was coming in the form of conquest by foreign invaders, both natural and supernatural. In this context, the pronouns “they” and “them” are just as likely to refer to the gods allotted to the nations as to the people of the pagan nations God would bring against Jerusalem.

The references in 2 Peter and Jude suggest that the Watchers, the sinful angels of Genesis 6, were the Titans, supernatural entities banished to Tartarus for their sexual transgression that produced unholy children, the Nephilim. Thus, Shemihazah, chief of the rebellious Watchers, was Kronos, king of the Titans, who was called “Baal Hammon” by the Phoenicians. According to 1 Enoch, the Watchers were condemned by God to “see the destruction of their beloved ones” before being bound in the depths of the earth until the Judgment.[14]

The evidence of history leads to this conclusion: The Watchers and/or the demon spirits of their dead children, the Rephaim/Nephilim, lured the pagan nations of the ancient world into burning their sons and daughters as sacrificial offerings to gods of the dead.

Now, consider this: God bought our freedom from the wages of sin—death—by sacrificing His Son for us. It was the ultimate reversal of the evil introduced to the world at Hermon.

[8] Charles Kennedy, “Tartessos, Tarshish and Tartarus: The Tower of Pozo Moro and the Bible” (unpublished essay presented to the First International Meeting of the Society of Biblical Literature, Salamanca, Spain, 1983), pp. 8–12.