ON THE PLAN TO BUILD THE THIRD TEMPLE (PART 14): All the World as One 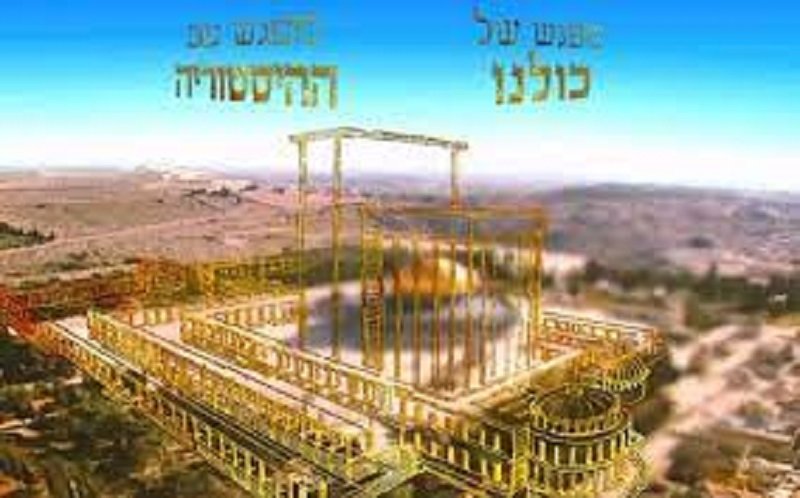 Neo-Babel builders construct even their music in a way that clearly demonstrates the luciferian desire to usurp God’s throne. John Lennon’s universally popular song could easily be mistaken as portraying the biblically prophesied millennial reign of Jesus Christ. But Lennon, like Lenin, preached man-made heaven on earth—an imitative mockery of the true Messiah’s coming kingdom. The words and melody are infectious.

It’s easy if you try

No hell below us/Above us only sky

Imagine all the people/Living for today.

It isn’t hard to do

Nothing to kill or die for

And no religion too

Imagine all the people

You may say I’m a dreamer

But I’m not the only one

I hope someday you’ll join us

And the world will be as one.

I wonder if you can

No need for greed or hunger

A brotherhood of man

Imagine all the people

Sharing all the world.

You may say I’m a dreamer

But I’m not the only one

And the world will live as one.

Globalism’s siren song is a one-world anthem that the true child of God cannot follow to its murderous, destructive end. The Holy Spirit within us is the tether who binds us to the masthead of truth. With Jesus Christ as the Captain of our salvation, we navigate through the treacherous seas of our time.

Still, we must be alert and heed the wake-up call.

The twenty-first century has brought great changes to American culture. It has been a spiraling out of control in most every facet of the nation’s society. Movement away from God became so overt as to make the observant Christian question whether the Lord of Heaven had given up on the United States altogether.

Then, there seemed to come a calming, refreshing breeze that restored common sense in America with the election of November 8, 2016. The vicious, destructive winds of socialistic madness had begun to stir early in the twentieth century. They grew to full hurricane strength while being channeled through increasingly liberal legislative and judicial bodies, with powerful assistance from equally liberal media.

The storm raged throughout the nation’s culture by the time the 1990s arrived. Occasional executive-branch resistance from 2001 to 2008 slowed it only momentarily while it roared against the country’s rapidly weakening moral barriers.

Suddenly, just as the great storm seemed to reach its full fury, American voters arose in sufficient numbers, and the howling leftist assault was brought to a stunned calm for a time.

Many reasons have been suggested for the loud repudiation of liberal ideology and its influence upon America’s governmental policies. Certainly, the electorate’s majority voice unmistakably demanded that politicians begin serving the people in a way that benefits the nation rather than continue serving their own parochial interests at taxpayers’ expense, as had been the case for decades.

But a sudden pulse of wind disrupted the calm only days after the people’s actions in the voting booths brought the tempest to a standstill. The gust seemed to burst from out of nowhere.

A national dementia, manifested by a rage beyond anything that had been seen in the country, burst upon the scene with fury. Hatred of the newly elected president by the political left, enjoined by the mainstream media, both news and entertainment, brought charges against Donald J. Trump that have never been substantiated, even partially.

The rage remains as of this writing. It is satanic in its virulence. It threatens the very constitutional fabric of America as founded.

When the American voters swept the one-nation-under-godlessness liberal utopian schemers out the front door, the ejected ones quickly ran around the side of the house, where they joined with the globalist New World Order builders, who were being welcomed in the back door with eager smiles and open arms. I wrote an entire book on this phenomenon (which some believe to be my best, ever) titled Saboteurs (Defender Publishing, 2017).

These Deep State globalists, whose master is Lucifer the fallen one, enjoined the rage felt by the losers in the 2016 presidential race. Their plans for building their new world order had been slowed by an act of Heaven. The new president is an ardent anti-globalist who wants to “put America first,” as his campaign slogan stated.

THOMAS HORN EXPLAINS THE COPPER SCROLL TO JIM BAKKER AND WHAT COULD HAPPEN THAT WOULD DEMAND THE BUILDING OF THE THIRD TEMPLE!

Under the guise of free trade, the one-world parasitic, global apparatus long ago began siphoning strength and resolve from this nation and others. The globalists elite now channel America’s wealth, along with funds from other geopolitical and economic spheres, into Third-World countries at a rate greater than ever before. They constantly strive to solidify their one-world power base through material goods giveaways. They continue to create and consolidate an ever-increasing constituency dependent on the New World Order hierarchy for absolutely everything as those poorest of people move through their miserable lives from cradle to grave.

The one-world schemers would have us believe that all this noblesse oblige is being undertaken on behalf of humanity for humanity’s own good: egalitarianism at its most glorious peak of achievement!

Mankind in general and Americans in particular fell prey to the sedative effects of globalism’s siren song while the eye of the storm passed calmly overhead.

GATT (General Agreements on Tariffs and Trade) certainly was not perceived to be a storm warning by most; rather, it was proclaimed to be salvation for the economic stability of the world. God, however, is never fooled and cannot be sedated. He put out the storm warning long ago that just such a time in human history will arrive when an elitist ruling class will combine its power and authority to create a mechanism of control through which it will attempt to enslave every human being on the planet.

God’s warning foretold that the world’s authority and power will ultimately be given to one man, the world’s last and most terrible despot (read Daniel 9:27, Revelation 13, and Revelation 17:12, 13).

What Is America’s Role?

Those who analyze prophetic matters have long puzzled over why the United States of America is not mentioned specifically in God’s prophetic Word. Certainly, there has never been a nation more blessed or more active in the spread of the gospel of Jesus Christ. Small and seemingly insignificant nations and regions like Libya and Ethiopia are recorded in passages of prophecy yet to be fulfilled, but not America.

A Reprieve for America?

To repeat the opening thought expressed at the beginning of this section: With the election of November 8, 2016, there seemed to come a calming, refreshing breeze that promised a return to government that serves the people rather than that seeks to rule with mastery over them. America seemed to have been given a reprieve from the death sentence the woolly-minded had pronounced upon religious and a growing number of other liberties. But how deep a commitment to return to those earlier, saner principles (and thus how realistic the reprieve) remains to be seen.

To those who have truly studied the Word of God, it is clear that man-made government that refuses to be guided by God’s principles of morality will inevitably degenerate and fall to tyranny within its own borders or without. Political parties cannot muster the fortitude to either restrain or constrain the oppression and tyranny that incessantly seek to enslave. Government of, by, and for a moral people can ensure those inalienable rights which our forefathers fought, bled, and died to secure for us. It is we the people, under God, who must determine to govern wisely. President George Washington said in his farewell address, “Reason and experience both forbid us that national morality can prevail in exclusion of religious principle.” John Adams, America’s second president, said, “The United States Constitution was made only for a moral and religious people. It is wholly inadequate for the government of any other.”

We must begin by governing our own lives in a way that is pleasing to the Creator. There is only one way to please Him, and that is to put ourselves under the lordship of His blessed Son, Jesus Christ, who shed His blood on the cross of Calvary for the remission of our sins. How wonderful it would be if not just the majority of American people but a majority of people throughout the entire world turned to Jesus Christ in humble repentance!

But, tragically, we can be certain that this will not happen prior to Christ’s return. God in His omniscience tells us through His Holy Word that “in the last days perilous times shall come” and that “evil men and seducers will become worse and worse, deceiving and being deceived.” The man who will be the world’s last and most vicious tyrant is perhaps even now waiting in the shadows just beyond the spotlight’s circle. He will take the crown given to him by his New World Order sycophants and use the platform of globalism they have erected to build a monolithic throne upon which he will ultimately sit, claiming to be deity while demanding worship.

Paving the Way for Antichrist

Today, movers and shakers in the world of global politics are paving the way for the world’s last dictator, the Antichrist. They do so most likely oblivious to biblical prophecy. But whether wittingly or unwittingly, they rush headlong into that dark night of apocalypse.

Globalism is the system of geopolitics, with the ideology at its center that desires exactly what God’s declaration forbids. Today’s so-called international community’s rant against Israel, considering the Jewish state an occupier of the territory given by the Creator of all things to the Jewish people in perpetuity, is at the heart of the rebellious hatred that will eventuate in horrendous consequences. The utterance that frames the preciseness of this generation’s position on God’s prophetic timeline cannot be repeated too often:

The burden of the word of the Lord for Israel, saith the Lord, which stretcheth forth the heavens, and layeth the foundation of the earth, and formeth the spirit of man within him.

Behold, I will make Jerusalem a cup of trembling unto all the people round about, when they shall be in the siege both against Judah and against Jerusalem.

And in that day will I make Jerusalem a burdensome stone for all people: all that burden themselves with it shall be cut in pieces, though all the people of the earth be gathered together against it. (Zechariah 12:1–3)

This is God’s answer to the raging heathen who want Him off their backs:

He that sitteth in the heavens shall laugh: the Lord shall have them in derision.

Yet have I set my king upon my holy hill of Zion.

I will declare the decree: the Lord hath said unto me, Thou art my Son; this day have I begotten thee.

Ask of me, and I shall give thee the heathen for thine inheritance, and the uttermost parts of the earth for thy possession.

Thou shalt break them with a rod of iron; thou shalt dash them in pieces like a potter’s vessel.

Serve the Lord with fear, and rejoice with trembling.

Kiss the Son, lest he be angry, and ye perish from the way, when his wrath is kindled but a little. Blessed are all they that put their trust in him. (Psalms 2:4–12)

The divine message is clear. The Lord Jesus Christ, not the rebellious world’s choice as ruler, will ultimately sit on the throne established by the God of Heaven.