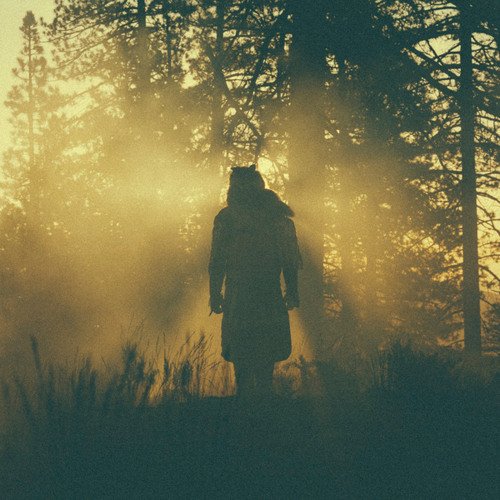 “Thou shalt not be afraid for the terror by night…nor for the pestilence that walketh in darkness.… Because thou hast made the Lord…even the most High, thy habitation.”

In front of him, a sparkling messenger departed in a flash to deliver the call that would prompt the chosen one.

Moments later, the black creature on Earth, less than three feet high, obeyed the angel’s order. It slipped silently through the forest, camouflaged by the trees, following the chilly stream to cloak its beastly smell. Its instincts, animated beyond human, sensed the unnatural mischief that required its small but deadly response.

Like Polyphemus the Cyclops grabbing Ulysses’s shipmates in order to gobble them up, the indomitable giant from the thicket moved with mythical speed.

Joe knew it was coming the instant he heard the enormous stride crashing through the woods and breathed the pungent odor he’d smelled inside the Dungeon. He hardly had time to reengage the M-249’s trigger before the unworldly thing was upon him. With the chugging sounds of the machine gun echoing across the canyon, the vicious chimera appeared, filled with rage and mutant strength, its bear-trap jaws opening wide a mouthful of bitter, horrible air.

Stunned and running on instinct, Joe shoved the barrel—hot as blazes with static fire—against the monster’s flabby girth. He pressed the trigger down hard and emptied the last thirty-six rounds of NATO munitions into its scaly abdomen. A particle splash of beast-flesh and viscera shot across his face and arms as bile dropped from the being’s ruptured stomach onto the ground with a gushy, intestinal flop.

A second later, the gun exhausted of ammo, he watched in amazement as the monster, shot dozens of times by the powerful, upgraded shells, sagged, but did not fall. The repetitive blows of the M-249 seemed to have only infuriated the dreadful beast as it snatched the precision-made weapon and hurled it over the cliff.

Grabbing him by the throat, the fiend lifted him from the ground and pulled him eye to eye. Snort-blasting a rancid sludge through its pebbled nostrils onto his tiny reddening face, the brute’s talons tightened around his neck, the sharp spikes driving into the soft bones near the base of his skull, choking him so completely that he fainted away at once.

As quiet as death and as ineffective as a rag doll, he awoke moments later to find that the thing was cradling him as tenderly as a child. He coughed into the 962-pound nanny’s face, grimaced and tried to scream, but couldn’t. The monster had squeezed his windpipe so firmly that, for the moment, it wasn’t working properly.

But the utility vest was still on him.

He reached for a grenade.

In an instant, the monster’s talon-tipped finger drew through the garment with rapid, surgical precision, tearing it off and throwing it a thousand feet into the woods.

Rahu grinned smugly, then raised and tilted him toward Apollyon.

In the middle of the road, portions of his face on the ground now, Apol was shambling his way, tiny streaks of red and yellow flame leaking past his gritted teeth. His angry, vermilion eyes were directly focused on Joe.

Not many human parts of Apol were left. He had rotted from the inside out, as something worse had acquisitioned him. It seemed to be on fire, a thing movement that told Joe everything he didn’t want to know. Something terrible was about to happen to him for dropping the embryo container.

He closed his eyes and quietly whispered, “Mom.”

Salty streams of sweat and tears began gushing down his amber cheeks. Sheri and Katherine are going to be all right. That’s the important thing now.

Yet his tongue curled to the roof of his mouth as what remained of Apol touched his bludgeoned body, the feeling radiating through him like the pestilence of pain and death.

Twitching at the command, Rahu rattled him, then relaxed his powerful grip and swatted him to the ground. Joe struck the road hard, splashing in Rahu’s bile. The rotting substance burned acidly against his skin as he gasped for a breath of air. When the giant didn’t follow the infliction with another serious blow, he struggled to his knees and ran his hand along his leg. He found the Ka-Bar fighting knife and reached to unsnap the pouch.

As if on cue, Rahu dropped his foot, slamming him against the stony ground hard enough to torture but not enough to kill him.

He gasped and grabbed his side. A rib might have been cracked or broken. He quickly probed the sensitive area and found no abnormalities. His breathing was troubled nevertheless; the creature had knocked the wind out of him. He moaned and reached for the knife again, trying hard to stand.

With rounding motion like that of a serpent uncoiling itself, Apol’s hand swung about and clasped the top of his trembling head. The disfigured, dappled hand somehow paralyzed him, as if injecting disabling venom directly into his scalp.

AMERICA IS SECRETLY POSSESSED BY ANCIENT GODS!? FIND OUT WHAT THIS CONTROVERSY IS ABOUT WITH TODAY’S SPECIAL GUEST JONATHAN CHAN

Through the stream, up the hill, rapidly closing in. Breathing, breathing, must stop the mischief.

Joe’s mind flooded with extraordinary panic. From the bony fingers squeezing his skull, somehow he knew telepathically that, little by little, bit by bit, Apol, or whatever this thing was, meant to eat him, guts and all. He would capture Joe’s essence and swallow him whole: his hair, scalp, ears, and then his cheeks and lips, tongue, and nasal passage, chewing and slurping and consuming him while he watched.

Yet, as the blood seeped from the talon punctures in his neck, Joe heard himself instinctively resist the psychic assault. “So, j-just when d-did you sell your s-soul to the Devil?” he mocked.

Apol jerked his head up so he could see the horror coming. His fiendish expression, no longer mortal, conveyed through vertical slits a fearful and malicious message: dinnertime.

“You’d probably think it was when I murdered your father for refusing to divulge the whereaboutsss of the Nibiruan Key,” he breathed from somewhere beyond his mouth. “But you’d be wrong. I invited the demon to take me as a youth, and now, he shall have you, too.”

Apol’s words pierced him to the core. Although he’d dreamed of the day when he’d avenge his father’s death, he’d never envisioned the monster with which his dad had been dealing. His father never had a chance, any more than he did now, regardless of how valiant he was.

Grotesque and enraged, Apol’s mouth opened wider, a nightmarish cavity lined with jagged molars and angled razor fangs, drooling with unnatural protoplasm. A hellish stench, thick and putrid, dropped out of the gorge as the shredded throat flexed and a crusty tongue, cyst-covered and forked, flopped over Joe’s face. The demon salivated in anticipation of the sanguine flavor, its oily gullet expanding to encase his entire head.

Joe wanted to scream, to cry out for help, but couldn’t. His wearied eyes flooded with hysteria as his neck stretched beneath the rancid, wormy shadow.

Standing next to Apol and observing the helpless young man, Rahu burst into uncontrollable belly laughter at the thought of what was coming. His tittering rumbled from his ruptured abdomen and gurgled out through his mouth and snout in a sloppy, bubbly fest. Grabbing his mangled paunch, he squeezed the blood from the bullet holes, throwing back his head and quivering with ecstasy for the moment. He would laugh until he cried, he thought, Joe’s terror was so satisfying.

Yet as he drank in the palpable fear, a glimpse of something caught in the corner of his eye, running toward them—flying through the air. By the time he contained himself and realized what it was, a black dog had locked its powerful canines around the snake man’s throat and yanked him over the bluff.

Suddenly collapsing onto the edge of the uneven gravel road, Joe caught himself before falling over the cliff. What was that black thing!? Buck’s dog!? Tater!?

He sucked in a lungful of fresh mountain air and listened to the toppling snake man screaming….

The former human sounded terrified, like a child plunging to its death: frantic, utterly desperate for someone to help.

Rahu bounded to the cliffside and squatted on the ledge beside Joe. He placed his claws near the bank for stability and watched as Apollyon somersaulted to the beach hundreds of feet below.

The large dog was tearing at Apol’s throat, thrashing its head wildly, growling as it drifted along the sheer canyon wall.

A moment later the duo struck the ground with tremendous impact.

To Rahu, it looked like the Labrador trampolined off Apollyon, who actually landed upside down, softening the dog’s fall. The canine bounced sideways and fell on its side against the river’s murky edge.

The dog immediately jumped up, hobbled a few feet, then crumbled to its belly, whimpering. Rahu thought the Labrador’s legs must have been fractured or that its internal organs were traumatized.

Nearby on the beach, Apol slowly opening his parabolic eyes and moaned. He raised one arm sluggishly toward Rahu, then dropped it. His chest heaved as he muttered something in demonese to the mother goddess.

Rahu didn’t understand. Perhaps the body Apollyon possessed—the transgenically modified Apol Leon—was too rotten to repair. Possible, but not likely, at least not yet. The mutation inside him had matured only twenty-four hours ago.

Seeing Joe crawling away now, he stood and turned his way. If he disemboweled the boy, he might be able to strengthen the injured creator with his intestinal supplements. After all, even the incarnated metabolism of the Destroyer needed a little nourishment now and then.

Joe was in the middle of the road in a combat posture, a knife in his hand.

Rahu stepped toward him, thinking how much he looked like a trained chipmunk beneath his own massive shadow.

He smiled. This wouldn’t take long. Not long at all.

Then he sensed something wrong in the ozone. His psychic connection to the other Nephilim was also rapidly changing.

On the beach, a distinctly human voice erupted from Apol Leon, screaming, imploring Joe for help.

Like a soul just discovering the true wages of sin!?

Rahu sniffed the air, and found it curious.

UP NEXT: WHEN MOUNTAINS MOAN